What’s the best feline idea you’ve ever had? Regale us with every detail of the idea — the idea itself, where it came to you, and the problem it solved. 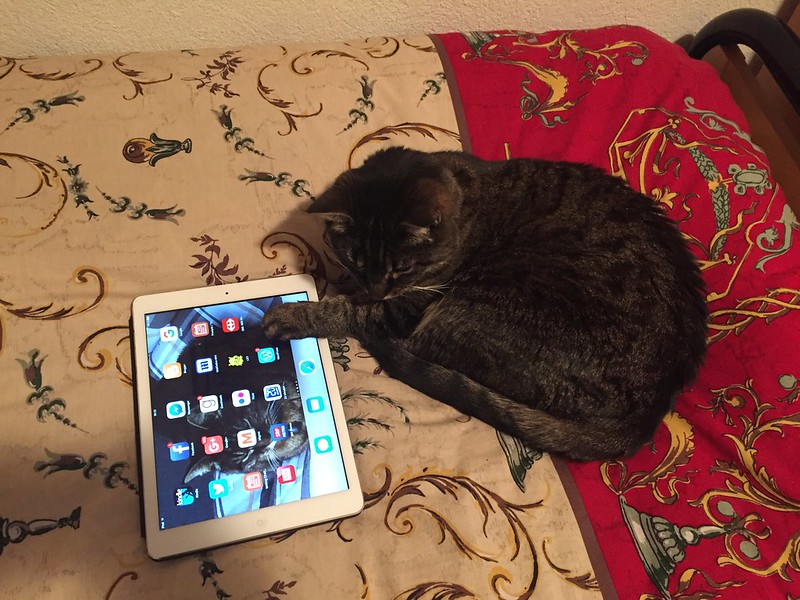 “The best idea we ever had was when my litter sister Nera and I decided to move in and take over at Mrs. Human’s place.”

“But Tabby, I decided to adopt you and Nera. I remember when I paid my visit to the humans’s that were looking after you. I had already prepared everything, a cat gymnastic center, healthy vitamin pellets and I had a nice cage for carrying you both. I also remember that you disappeared and we had to pull you out from beneath the settee and you bit the nice man that was looking after you on the hand.”

“It was all planned Mrs. Human. Our mum was also there and she said go for it, move in and take over, but don’t make it easy for her. If you put up a fight, the humans try even harder to win your favour and don’t forget, you call the action. Always be one paw and whisker ahead and above all don’t let the human think she has it all under control. Yes our mum really had things organised.”

“What about your dad?”

“What dad? I think there were a few dads, but we never really worked out which one was ours. Anyhow it worked out fine for everyone.”

“Meaning it worked out fine for you and Nera. What are you doing with your pawpad?”

“Tabby your ideas are becoming too technical for me.”

“You know, one that I can take with me when I am on a tour of my territory. I will then have contact outside and can do a floogle search for information I might need on my way. See what Butch and Roschti are planning to take over. They paw it all in their blogs and then I will always be one paw ahead.”

“You mean that the felines also have a search machine?”

“We invented it. How else do you think we found that you were willing to let us move in an take over those many years ago. It was all done by whiskers net. “Comfortable feline villa to take over, 2 human slaves willing to clean recycling tray regularly and twice a week tuna fish. Disadvantage: vitamin food pellets. Territorial rights to be discussed with bordering felines. Comfortable sleeping places in every room.” It was perfect Mrs. Human,.”

“Somehow I thought it was because cats were such loving animals.”

“Matter of interpretation Mrs. Human, and close the door when you go, it is draughty.”
Posted by Pat Gerber-Relf at 16:50