What’s the best idea you’ve ever had? Regale us with every detail of the idea — the idea itself, where it came to you, and the problem it solved. 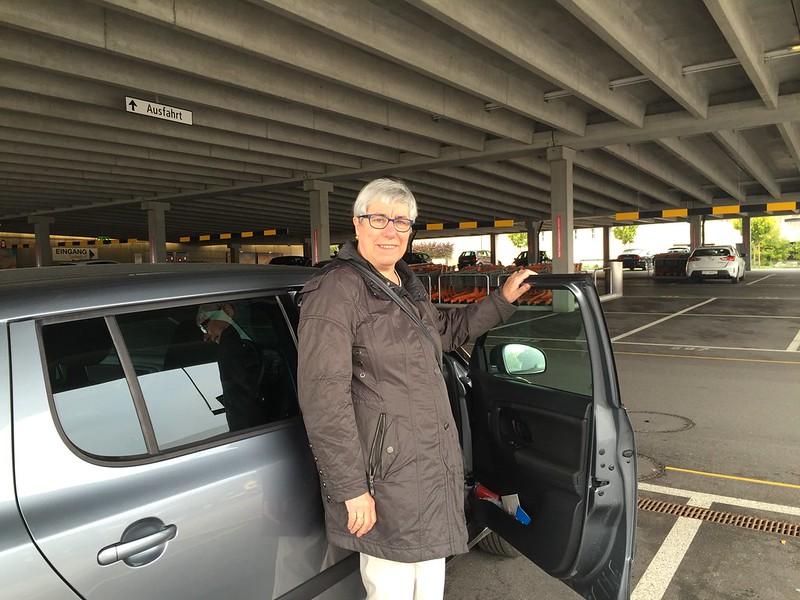 Yes, I have a brain somewhere amongst the cobwebs of age and I just read that a landmark study in 1998 by researchers from Sweden and the Salk Institute in La Jolla, California, showed for the first time that some brain cells in mature humans may regenerate under certain circumstances. The explanation did not go further to say what circumstances and how mature a human should be, so perhaps I still have hope.

The last time I wrote about my best idea was two years ago and believe me since, I have not had any better ideas. As you progress in life you avoid having ideas as the excitement gets a little too much. On the spur of the moment I said to Mr. Swiss take my photo as I was getting ready to climb into the car after completing a safari in the supermarket, so he did. This is the passenger seat, the driver sits on the left side in our country, as in most countries. It was the first day in Autumn that I put on my winter jacket so to celebrate I had my photo done.
Ideas are better avoided when you become a golden oldie. The excitement is too much. I used to have ideas like learning Russian, visiting a weekly Tai Chi class, and going for walks. I stopped learning Russian about 10 years ago, although the basics have remained. Not that I could have an interesting discussion with Vladimir Putin about Russian politics, but I can speak a few words to one of the shop assistants in the local supermarket about how I am, how she is, hello, goodbye and thankyou. I gave up my Tai Chi, because - to be quite honest - I was getting lazy. The idea was I could still do it at home on my own with my various DVD’s, but like all things that you intend to do, you no longer do it.

I discovered a couple of weeks ago, that I did not have a decent watch, although who needs a watch today. An iPhone also does the job. The time is always with you, but then I decided I want an Apple watch. I am still thinking about it, the problem being that I will have to upload the newest IOS2 version myself. I phoned Apple today to ask if they were delivering with the newest version as I decided speaking was better than Internetting. It was the telephone no. for Swiss people. I told the lady what I wanted and she then interrupted me and asked if I could speak high German as her knowledge of Swiss German was minimal, probably non-existent. So I had to change languages from Swiss German to High German, and then we had a common denominator in languages. She told me that all the Apple watches ready to be sent were all packed in their boxes with the guarantees etc. and none had the latest IOS2 version and I would have to upload it when I received it, but it was easy to do. I am still thinking about it.

Next good idea was to write this daily prompt, but I am not so sure that it was a good idea. I am running out of ideas for daily prompts, especially as I used all my ideas up for this one on 30th December 2013. It is Mr. Swiss birthday tomorrow, so I will again have to search my brain for a good idea for a rip roaring celebration, although these days we take it easy, it might be too much excitement for a golden oldie as he is.