Describe a time when you quickly switched from feeling at the top of the world to sinking all the way down (or vice versa). Did you learn anything about yourself in the process?

We are experiencing many valleys at the moment with Fluffy, but also now and again a few mountain tops. 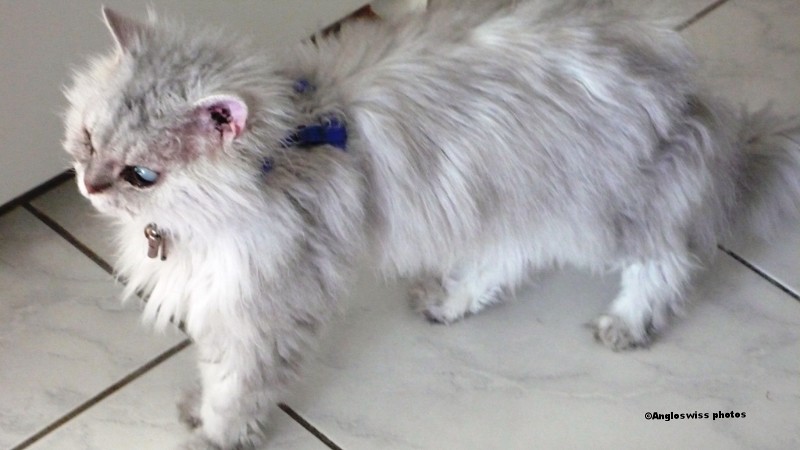 It’s Mrs. Human reporting from the feline headquarters. As most of you know we have been having a very hard time since last Sunday when Fluffy had to have an emergency 2 hour operation on his left eye. He has been blind since he was 2 years old, is now 12 years old but there have always been problems from time to time with the eye, although not serious, just a matter of keeping them clean.

Last Sunday she had an injury on the left eye and it was not pleasant. We were very lucky, we phoned the vet and she was there, which is not always the case on Sunday afternoon. She said to bring him at once, she examined the damage and said they would have to remove the eye. Afterwards she called the person in charge of the clinic and they performed the operation together straight away. Of course, Fluffy was kept at the vets for a couple of days. It seems he lost a lot of blood during the operation, 30%, which is naturally dangerous for a cat. It was a 2 hour operation.

He was back at home on Tuesday. We were giving him antibiotic tablets twice a day coupled with medicine against the swelling, but he was just laying around all the time, not eating or drinking. The vet found he was better at home with us in his own surroundings as in the cage at the vets in the cellar was not the same thing. We were getting very worried, his temperature was 36° instead of the normal 38° for a feline. His weight at this time was 3,600 Kg.

I would mention that we have a very good vet surgery. They have known all our cats since they are kittens, especially Fluffy. There are 4 qualified vets working there and they are all in the picture about Fluffy. Eventually he began to drink again, finding his own way to the water supply, but he was not eating. Yesterday the vet in charge said she did not know how long he could continue without eating and she found his white blood cells were too many. This morning it was with a heavy heart that we brought Fluffy to the vet, but in the meanwhile Mr. Swiss and I found no, Fluffy was now and again moving on his own and absolutely did not seem to be in pain. It would be very easy and comfortable for us to say his time was up, but something was stopping us. We felt that we humans have it very easy to make such decisions. This morning we had a talk with the vet who looked at Fluffy and she also found that perhaps we should wait. His eye is absolutely not infected and as long as he is drinking he is still reacting. The big problem is that he is not eating but then something strange happened. She put him on the scales again and he had gained 100 grammes and was now 3,700 Kg. The vet found that could only happen if he had eaten something, so where did the extra weight come from?

I always have food ready for my felines, they have no feeding times and there is always a bowl of something there, usually Hills vitamin pellets. She also said bringing it all to an end is a matter of a couple of minutes, but if he has no pain and is comfortable, then she would advise to wait over the week-end. If anything would happen we only have to call.

So at the moment Fluffy is laying on the carpet, drinking water now and again and going to his tray. Another thing we notice is that when he is in the car to go to the vets, he lifts his head and looks around as if to say this makes a change. Today Mr. Swiss opened the window to the garden and he had already arrived. So what are we to do? It is a puzzle, but at the moment we have decided to wait. I will be going to England on Tuesday, but Mr. Swiss said no problem and I know he will cope.

All I know is that we are not giving up yet.
Posted by Pat Gerber-Relf at 19:15