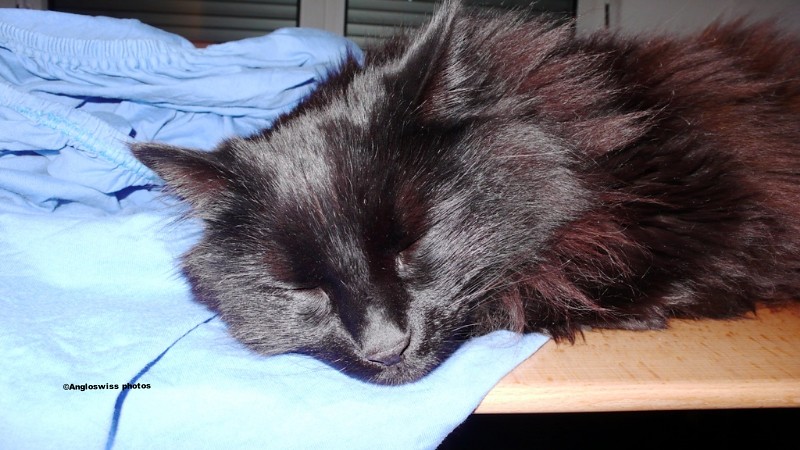 “Now Nera is really resting on that photo Mrs. Human. What’s an obituary? We don’t have that word in meow.”

“It is when someone leaves us for ever, we write about all the good things they did in their memory.”

“Aha, now I know why we don’t have that word. We never go anywhere, we just change places and we don’t even try to do good things.”

“But Nera left you.”

“She did not leave us, she transferred to a different level.”

“You mean the rainbow bridge?”

“Forget it, Nera arrived at the rainbow bridge and found it boring waiting for everyone that she knew to join her, so she did some transcendental feline meditation to go further. Bastet sent a scout looking for talent at the Rainbow Bridge, saw Nera and engaged her in the eternal corn chambers. Since then she has been hunting mice and keeping order there.”

“But Tabby, who told you all that.”

“But she has departed, she is no longer here.”

“Of course she is Mrs. Human. I will call her with my magical power paws. Nera, Nera, are you there, give us a message.”

“Tabby, don’t be silly, I don’t do messages, of course I am here, I am always hovering around in between mouse hunting. Hello Mrs. Human. Hows things? Mrs. Human?? What’s wrong with her Tabby, why is she laying on the floor?”

“She’s human and doesn’t understand the power of feline or meow. I found her looking up Bastet in one of those human books. Who needs a book. We have it all in the feline senses. In any case she has fainted, probably because you appeared with all that transparent smokey stuff surrounding you. Perhaps your form did it?”

“Whats wrong with my form?”

“Well let’s face it Nera, when you live in the Kingdom of Bastet, being half transparent is a bit different and walking through walls instead of entering by cat flap is not the usual thing down here.. Fluffy and I don’t mind, but probably Mrs. Human finds that a little bit over the top.”

“Then perhaps it is better if she faints. I will now go have a cookery course up there with Bastet. I have to learn how to prepare mouse au vin. Those pharaohs had all sorts of supplies in their pyramids and we have to use the wine up now and again. Have fun, see you soon.”

“Did I see Nera who left us last year.”

“No, no, Mrs. Human, probably just a figment of your imagination.”

Click here for more
Posted by Pat Gerber-Relf at 17:29