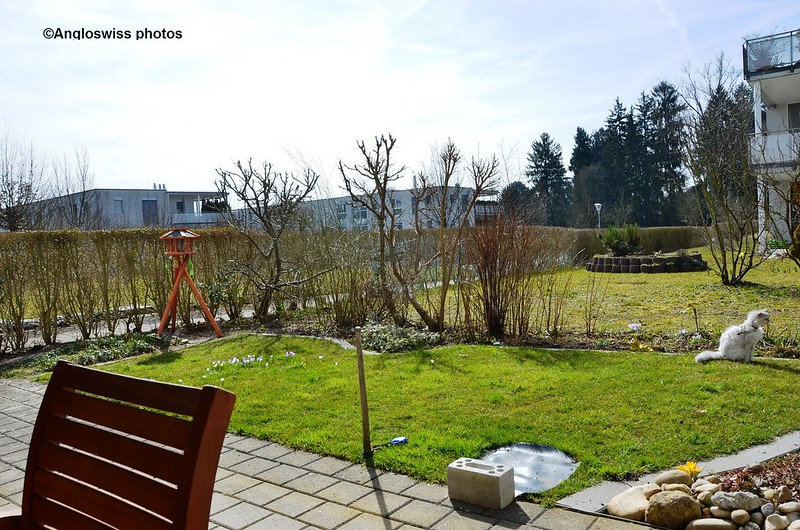 And about time too. After Winter threw its last snow showers sometime during February, it gave up and left, although there were some remains in the shape of temperatures below 0°C during the night and white frost covers on the grass in the early morning. Now the time has come to think about enjoying warmer temperatures outside. Even Fluffy our blind feline makes the most of the spring weather.

The trees have been cut ready for the new outgrowth and there are even signs of crocus in the lawn. I was surprised because this lawn is completely new and only arrived last year some time in summer. The solid was renewed but it seems that the crocus bulbs retreated to a secret place as if to say “you won’t kill us off that easy” and they have returned in their full glory.

In the bottom lefthand corner you see the top part of one of our patio chairs. Of course there is a table and four other chairs to match, as well as two sunbed chairs. You never know, I might even dare to show my shoulders and legs to the sun, in the hope that their usual shades of Mediterranean brown will return.

Today was the first day of the year that we ventured to eat lunch outside in the fresh air. OK, I managed to find a knitted jacket, my son was wearing a pullover and Mr. Swiss was wearing long sleeves. It was a simple plain lunch of veal breast slices in a cream sauce and saffran noodles and I must admit that the noodles were not the usual fresh from the saucepan warm temperature, but who cares. We survived and we did it all outside.

I am now writing this memorable blog outside in the full sunshine whilst Mr. Swiss is playing with his iPhone. I am in a dilemma. shall I lower the sunshade which would mean blocking out the ultra violet rays of this memorable day, or shall I continue to squint my eyes against the glare. I think I will continue squinting. The days are not long enough up to now for an eternal sun glare and due to my enlarged nose I avoid sunglasses. It turns my nose into something resembling a snowman carrot nose.

Yes, the golden sun is slowly sinking into the West, and our neighbour opposite is preparing her vegetable patch for Summer and probably installing protection from the four legged felines that invade from time to time. She does not like felines, she hates felines, and would probably organise a shot gun if it were not for the fact that I am an outdoor person and permanently have her under observation.

And here another prize winning photo of the first crocus in the garden, complete with bee waving to us all and being proud to appear on my blog. 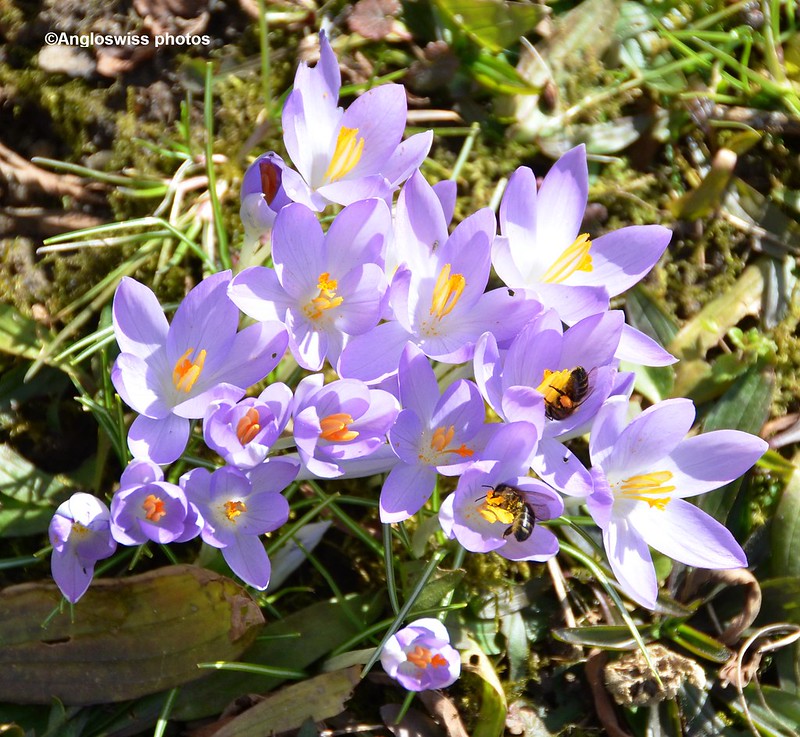