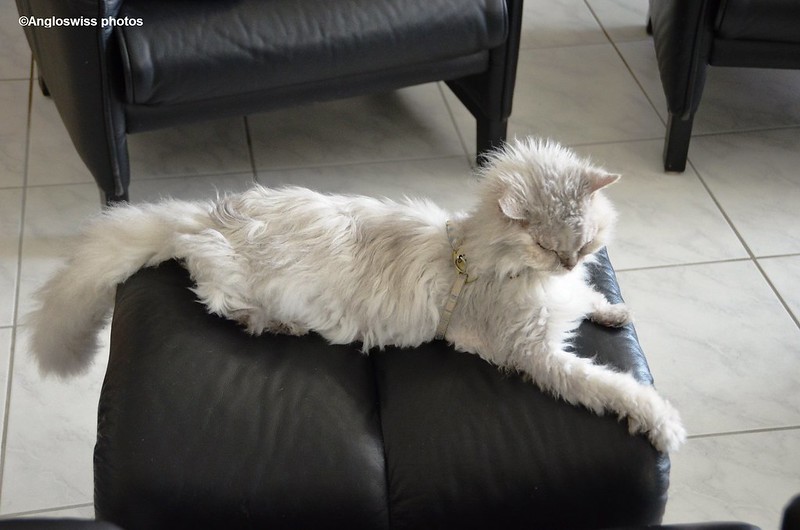 “I used to eat flies when I was younger and could catch them. Now I just feel them buzz past my nose.”

“You are blind Fluffy, that is why you don’t catch them.”

“Forget it Fluffy, you are OK. I don’t like flies, they have a bitter after taste, much prefer a bird, they fly as well.”

“True Tabby. By the way what do you think of my pose on the photo.”

“Looks good, as if you were a feline model.”

“Yes, that’s the idea. I sent the photo over my pawpad to Paw-Chat Rodin, the famous feline sculpturer and he said I have a good chance.”

“A good chance for what?”

“You know that guy on the pedestal in London called Nelson. He has four lions at the base of the statue.”

“But you are not a lion Fluffy.”

“That is just a fluke of nature. Bastet cannot do everything according to your wish. Anyhow they are going to make a similar statue of Bastet for somewhere in a place called Egypt and they need four felines to model the base at each corner, like that Nelson guy has and Paw-Chat Rodin will be able to model me from my photo online.”

“You will become famous Fluffy. Does he need a good looking Tabby feline as well.”

“He might Tabby. He reckons he can do me in marble, because I am white. I am sure he will have a chunk of granite somewhere for a Tabby cat. Perhaps Mrs. Human will take a photo of you when you are relaxing outside, but you must stay awake and look serious and determined.”

“You mean a thoughtful intellectual pose, something like his great work The Feline Thinker.”

“You mean not even a dead mouse or a butterfly is in the deal.”

“You will be rewarded by the people that will come to see your statue.”

“But that will be in Egypt.”

“We will have to watch the FelineTube film on our pawpad in that case and Paw-Chat Rodin said he would send a signed pawprint.”

“Tabby there are other things in life than food.”