Take a subject you’re familiar with and imagine it as three photos in a sequence. Tackle the subject by describing those three shots. 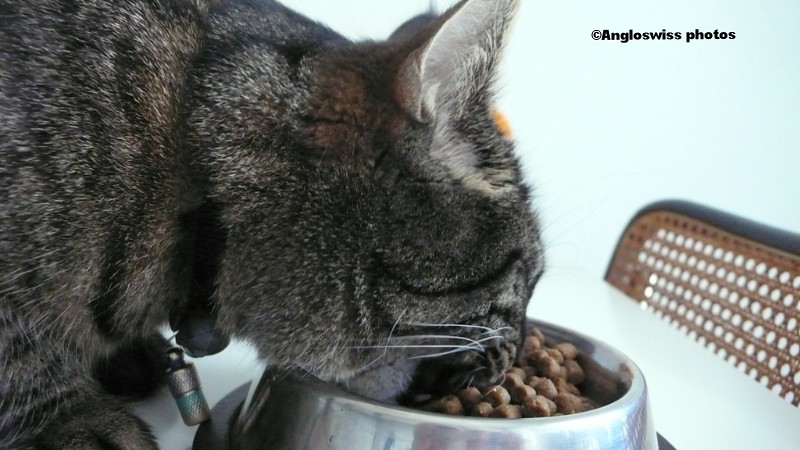 “Is that your shot Tabby?”

“What’s wrong with it Fluffy?”

“Well it’s OK, so what about the other two.”

“Mrs. Human said three shots would be too much, She doesn’t have the time to sort it on my paw pad, she has enough problems with her own three shots.”

“Yes, but munching away at vitamin filled pellet food is not particularly interesting.”

“Of course it is Fluffy. Other blogging felines can see how deprived we are with our food. Just a bowl of dry pellets, when we should be eating tuna, caviar, salmon. They will complain and Mrs. Human will have to rethink her diet plans for us.”

“I don’t think so Tabby. Humans have the idea that we eat healthy food and that fresh fish and meat is not so good.”

“Tell that to the lions, or even Bastet. It says in the book of Bastet, chapter 333, verse 20 that felines should be fed with fresh meat at all times and dead mice should not be dead longer than five minutes and we get dead pellets which probably never lived.”

“But on the 10 kilo packet it says made with chicken.”

“Fluffy, chickens have legs and walk. They are not dried pieces of chemically flavoured brown material.”

“Oh, well I quite like the pellets now and again. Washed down with a dish of fresh water they are ok. Mrs. Human said I look very healthy at the moment and am putting on weight.”

“Good for you Fluffy, but you would look more heathy and put on more weight if you were fed with fresh meat.”

“Where are you going Tabby?”

“Picture 2 and 3. Picture 2 is me with a dead mouse and picture 3 is me eating the mouse. I just have to catch it first of all.”

“Oh, in the meanwhile you can see picture 2 of me having a wash and picture 3 sleeping after my meal of chicken vitamin pellets.”

“OK Fluffy, what’s all this rubbish with the pictures. I will leave out my picture 2 and 3 and join you with the wash and sleep after the delicious dry boring vitamin pellets.”

Click here for more
Posted by Pat Gerber-Relf at 21:05