Take a subject you’re familiar with and imagine it as three photos in a sequence. Tackle the subject by describing those three shots. Photo from supermarket car park on a clear day. 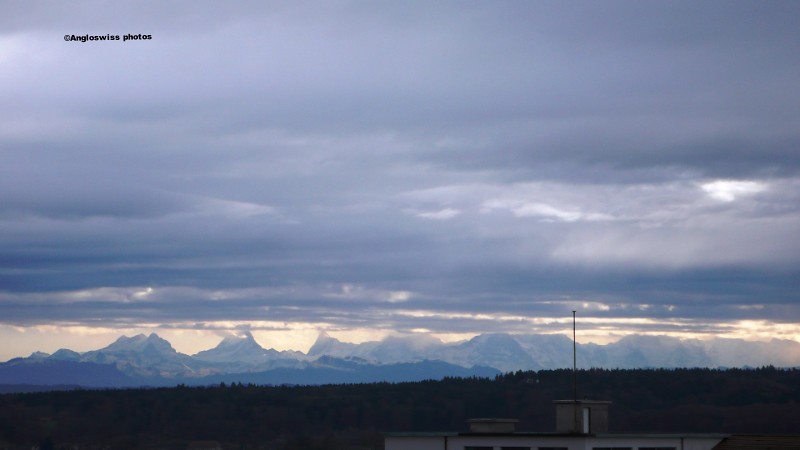 The scene is set. It could be Monday morning, Wednesday morning or Friday morning, but same place always, the local supermarket. Not Tuesday morning because it is the day when the golden oldies have 10% rebate if they have their special rebate card and that is not good. Mr. Swiss ventured into the supermarket this week on Tuesday and managed to escape after battling his way through the crowds of grey haired golden oldies that were blocking his usual rapid movements. Yes, Mr. Swiss is quite fit when he is shopping. He want to get home again.

So we have scene 1, the preparations.
What do we need? Whilst I am still combing my hair and checking on my appearance Mr. Swiss is already sifting through the cupboards in the kitchen. Do we have pasta, potatoes, rice, the basics. I believe he also examines the chocolate supply and then he calls in an urgent voice. “What are you cooking today and tomorrow?” We always shop for two days, especially if tomorrow is Tuesday, the day we want to avoid shopping because of the golden oldie invasion in the supermarket.

“We had fried potatoes yesterday, so today I think today pasta.”

“Fine, we have noodles, cravattine, penne.”

“Ah, then lets cook some Kohlrabi in a béchamel sauce with it.”

“With what? No forget it I know, they have asparagus in special offer, I will cook asparagus risotto.”

The plans are made, phase 1 is completed and we descend to the garage.

Now to scene 2
I climb into the car, front seat on the right. The steering wheel is on the left, reserved for the driver which is usually Mr. Swiss. Whilst I am getting comfortable, finding room for my long legs, Mr. Swiss is stowing the empty shopping bags into the boot. He joins me in the car and the journey begins.

We roll upwards out of the underground collective garage for all the parties living in our consortium and I take a look towards the right whilst he checks the left. We are entering the side road and you never know what kamikaze drivers are on their way ready to kill. If everything is clear we turn right and if our luck is out we approach closed barriers of the local railway. Eventually we are on our way. The car makes a signal in Winter for 4°C temperature and according as to how cold it is the signal either arrives when we leave the safety of our area or later. This morning it was later, we were almost on the road to the supermarket. There were only women drivers and golden oldies on the road. Perhaps there were a few delivery vans, but it was safe to put the foot down on the gas pedal, as long as you did not exceed 50 kmh on the way. You never know who is watching. It was a smooth journey, although Mr. Swiss did let out one small profanity on the way. Was he cursing the driving quality of a female or were there too many traffic lights showing the colour red. Oh what an adventure this is, so exciting.

Scene Three, the arrival.
Yes, success, we reached our destination with no problem more or less. There were empty spaces in abundance, due to the fact that it was Wednesday and not Tuesday. Mr. Swiss mentioned that on his exceptional journey on Tuesday the place was packed full of classical golden oldie car samples. We have a neat little Skoda Fabbia which fits into any space, except when I am driving. I prefer three empty spaces, so that I can easily glide into the middle space with no problem.

We left the car and whilst I sorted the shopping trolley, Mr. Swiss made his way to the parking machine. The shopping trolley is free. You deposit your money into the slot and when leaving the supermarket you get the money back. Parking costs money according to how long you stay. We decide we stay for 30 minutes, sometimes it might be longer, but we generally pay for 30 minutes which amounts to 50 Swiss cents. As Mr. Swiss is dealing with the financial details I make my way to the supermarket entrance pushing the trolley for support. It is an uphill road to the entrance.

Mr. Swiss might overtake me on the way as I no longer move so quick. This morning he overtook and I met an Irish lady I knew from my Tai Chi classes. We had not seen each other for some time, so of course we had to catch up on everything that had happened in the meanwhile. As she is also a golden oldie, we spent some time discussing our health problems. We finished our conversation and I passed through the automatic glass doors of the supermarket entrance. As I passed the restaurant, which is near the entrance, I saw the supermarket ginger cat who was sleeping on a chair in the restaurant. I was just thinking about taking a photo, when I saw his brother who was pacing the entrance corridor. It was then I glimpsed Mr. Swiss who was no impatiently waiting for me.

We had arrived, we were there, safe and sound. We had a small discussion about waiting for me, but I told him who I met and saw. We lost no more words on the subject, we had a mission to accomplish.

Click here for more
Posted by Pat Gerber-Relf at 16:03