Write about something that happened over the weekend as though it’s the top story on your local paper. 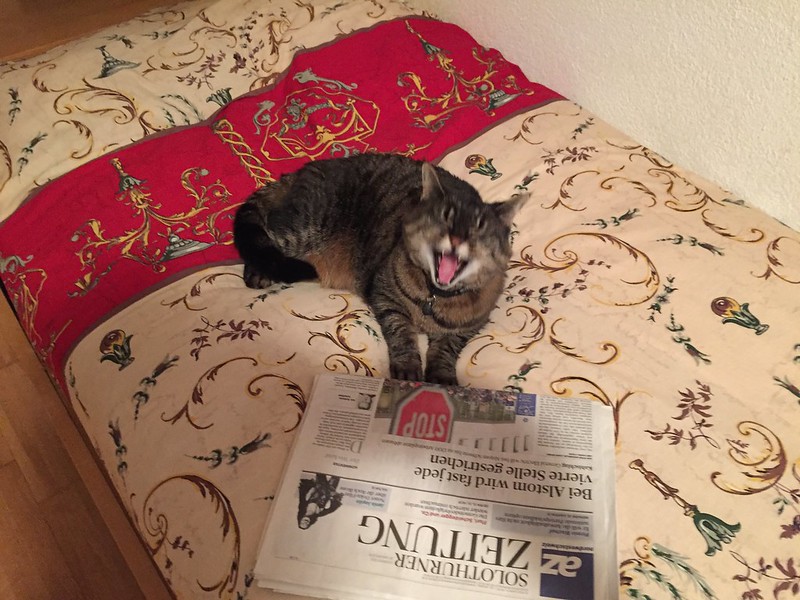 “Why are you looking so angry Tabby.”

“I am not looking angry Mrs. Human, just expressing my displeasure at a newspaper report. It says that all feline territorial rights are to be ruled over. There have been too many complaints from the humans about feline disputes and the noise made. From now on the territory belongs to all.”

“But that is much better Tabby. I am sure you felines will sort it out and will have a much better understanding. You could perhaps even from groups and join in activities like taking walks together. I am sure life will not be so hectic with all those stupid territorial disputes.”

“Mrs. Human if your neighbour decided to collect the apples from your apple tree in the garden would you be happy about it?”

“Of course not, it is my apple tree. He can plant his own.”

“Exactly, and so are territorial rights established. If Roschti walks through my territory and decides to leave a mark, we have a feline discussion and the feline with the loudest voice and longest claws usually wins. Although it might be that one of the felines manages to run faster than the other which also solves any problems of confrontation.”

“You mean when you run away.”

“Just to avoid a dispute Mrs. Human. It lays in the nature of the feline race that we establish our territory. If there are no territorial rights, there is nothing for a feline to discuss and feline life is boring. We could just as well share the mice we catch or the birds.”

“That would be a good idea. If you catch a mouse you could divide it between yourself and the other felines. Then no-one would feel left out or starve.”

“Yes of course Mrs. Human. The next time you go to the supermarket and buy a chicken, you could perhaps give a leg and a wing to the lady upstairs.”

“But then we would not have enough for ourselves.”

“Yes, of course, Mrs. Human. So please do not try to tell me how to live my feline life and I will not tell you how to deal with other humans. By the way I just read on my iPad that a human journalist that suggested abolishing feline rights has been delivered into the hospital for treatment on various scratches from felines. I think the idea has been abolished.”
Posted by Pat Gerber-Relf at 17:13