…When all you need is a tin opener might not be ironic, but it is unfortunate. Add your own verse, stanza, or story of badly-timed annoyance to Alanis Morissette’s classic. 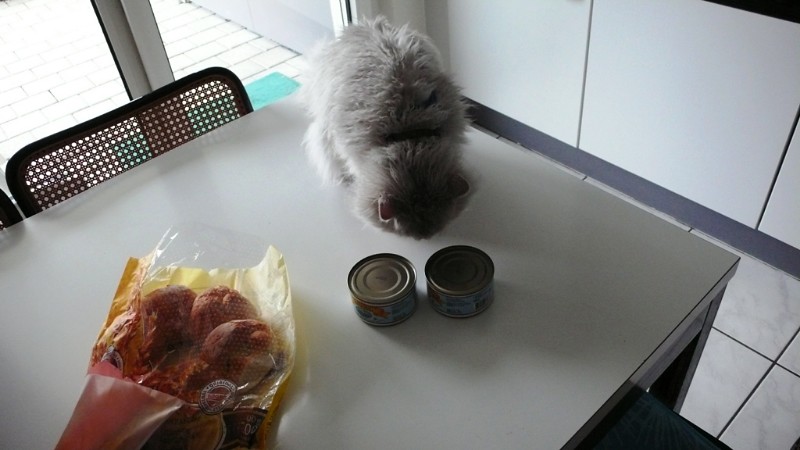 “Now that is an ironic photo Mrs. Human. Fluffy wondering how to eat the tuna fish in the tins without a paw friendly tin opener, which has not yet arrived in the shops.”

“I remember the photo Tabby. I opened the tin for him afterwards.”

“Fluffy told me that he now has tuna fish tins that do not have to be opened. He just makes a wish and they open themselves in the eternal corn chambers”

“You had a conversation with Fluffy? I thought he had left us for the rainbow bridge.”

“Oh yes, Mrs. Human, where he is waiting for you to collect him? Forget it, tuna fish tins wait for no-one. When we felines reach our 10th life, there is enough tuna fish for everyone. The Rainbow Bridge is not a feline thing, there is water below and we might fall in. We prefer dry land and so we go to the eternal corn chambers.”

“By the way Tabby, they now sell the tuna fish in pellets, so I thought that would be something easier for you to eat.”

“You mean like those vitamin filled hard pellets that I have to force down my throat every day.”

“Yes exactly, it will be so much easier for you.”

“Oh yes, Mrs. Human, Tell me would you eat your steak if it was just a pellet with a steak taste.”

“That is not the same Tabby.”

“Good, because I discovered that you can now buy packets of steak flavoured pellets and I ordered you a packet online.”

“But I prefer the real thing. I have a steak in the fridge for my dinner.”

“Not any more Mrs. Human. I gave it to the dog next door as a peace offering. The dog said he would no longer chase me if I give him some fresh meat. And now you can munch your steak pellets Mfrs. Human, look.”

“But they are very dry and tasteless.”

“Somehow that is ironic Mrs. Human. I am supposed to have fun eating my permanent supply of pellet food, and when I organise the same for you, you tell me it is tasteless.”

“It is not the same thing Tabby.”

“I know, mine are chicken flavoured and yours are steak flavoured, but let’s be frank, they all taste the same - or would you prefer something fresh? I know I prefer tuna that looks like tuna, perhaps humans prefer steak that looks like steak. I know the dog next door loves it.”