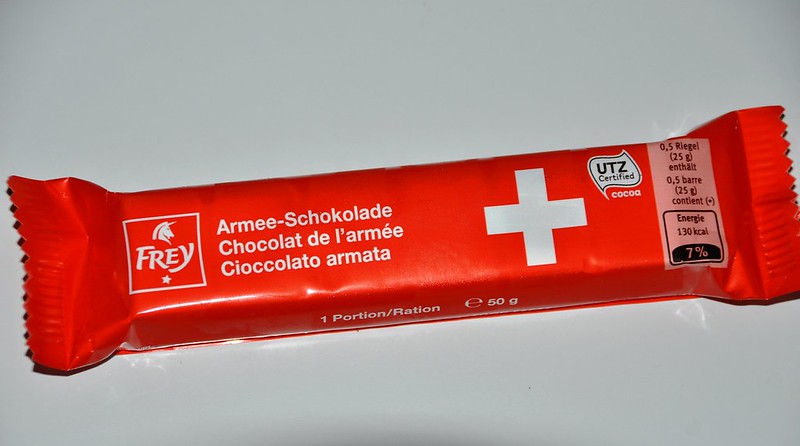 I could not find a photo of a piece of humble pie in my collection so here is a photo of Swiss army chocolate, that every able bodied Swiss soldier would recognise. Yes, we have an army and anyone at the right age, and being fit enough, must do his three weeks service every year until his time has been done. My youngest was a soldier for at least 10 years, annually, and many were the bars of Swiss army chocolate that he ate whilst on manoeuvres, but wait. He never did manoeuvres, only in the first 15 weeks as a recruit. Otherwise he was sitting in the office looking after the accounts and ensuring that they had enough to eat from the local food suppliers.

So back to WordPress and the task they have given us. It seems to be a one of those weeks where we make a self analysation about whether we hold grudges, do we forgive and forget and now to top it all, we must tell them all about when we ate humble pie. I don’t have a problem with humble pie and certainly do not make a blog about it.

I could tell everyone how I hated the new editor on Word Press and stuck with the old one just to prove “not with me”. In the meanwhile I have downloaded the new Mac App for WordPress, am loving it and have also discovered that I can do the new WordPress editor with absolutely no problems. Perhaps I am one of the lucky ones, because my photograph hosting site is not in WordPress, but in another place and so it works. I do not have to tear my grey hairs out in frustration after spending an hour trying to upload one photo with heading, as many others seem to be. I also write my blog first of all on my computer in Pages/Word and do a copy paste into the new blog interface which works nicely. I don’t know if it works so nicely if you write direct into the new editor. Here there is still a slight problem with copy paste, these instructions do not work on the mouse, so I have to apply Strg C and Strg V, but that works nicely.

The new editor is somewhat narrow, but even that I have got used to, probably because to compensate the text is bigger and being a golden oldie my horizon is narrow in any case. I do not like travelling up and down to arrive at the heading, it used to travel with me. I also do not like scrolling to get to the html heading, but I have survived. I have discovered if you can do html, half the battle is won with this new editor. If you cannot do html, then you may have problems.

So that is my humble pie. At first I blogged about how useless this new development was. It was going in the wrong direction and now I have learned to like it. I did the big test yesterday with one of my illustrated blogs, a few photos and text in between. I did not need more time than usual and to be honest I even finished it quicker, thanks to the new WordPress App on my Apple. Ok, I have an Apple, not all of us have an Apple, but WordPress have promise that the Windows App is on its way, just put your name on the list for those waiting.

So and now I am concentrating on digesting this confessional. Let’s see if there is some pie left for others. I hear the sound of the vacuum cleaner in the background, but Mr. Swiss said something about emptying its digestive system. It must have swallowed some crumbs from my humble pie.
Posted by Pat Gerber-Relf at 15:26