Textures are everywhere: The rough edges of a stone wall. The smooth innocence of a kitten's cheek. The sense of touch brings back memories for us. What texture is particularly evocative to you? 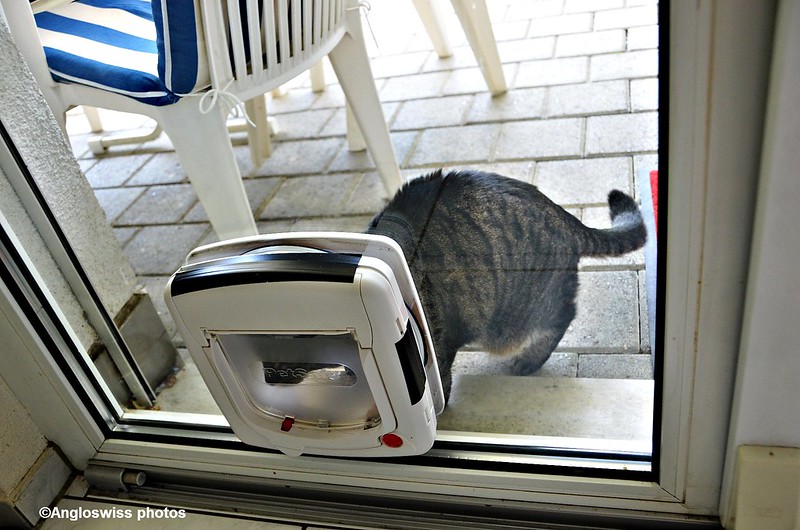 “The touch of my own personal feline flap when I enter my apartment, especially as the window has now been replaced. It was most annoying, not to say degrading, to use my own private entrance with a large crack in the glass next to it.”

“Yes, Tabby, the man came today and replaced the glass window and assembled your cat flap.”

“Abut time to. It makes  my coming and going movements much easier. Just a light tap with my nose and the glass door opens. Now all we need is something a little bit more dressy.”

“Don’t come again with the diamond studied cat flap Tabby, because it is not going to happen.”

“Who said anything about that. No, Mrs. Human, the latest is the remote control cat flap, but I need a sender and you will have to fit a receiver into the flap. All I would have to do is sort of scratch my left ear with my paw the the cat flap opens before reach it, which makes it easier to escape from any followers I might have.”

“Yes, Mrs. Human, the right ear scratch is reserved for leaving the cat flap from the other side. Logical really.”

“And where can you get this high tech cat flap, on line with my credit card?”

“That is the problem Mrs. Human, it is still being developed, but we are making progress. The great feline inventor Tim Burnout-Maincoon is working on it. He is searching for felines that are willing to help in the tests and the first prototype will be supplied free of charge to one of those brave felines.”

“A super idea Tabby. Where do I find the link on Pawnet.”

“Huh? I didn't know your were interested in such feline developments.”

“Of course Tabby, when it doesn’t cost anything. You can go and pack your bags and don’t forget your own recycling tray.”

“Mrs. Human I have no intentions of becoming a feline guinea pig for such developments. I prefer to wait until the first model appears and then I will suggest to Roschti, the feline next door who I hate, that he would try it. If he survives, I will think about it.”
Posted by Pat Gerber-Relf at 16:29