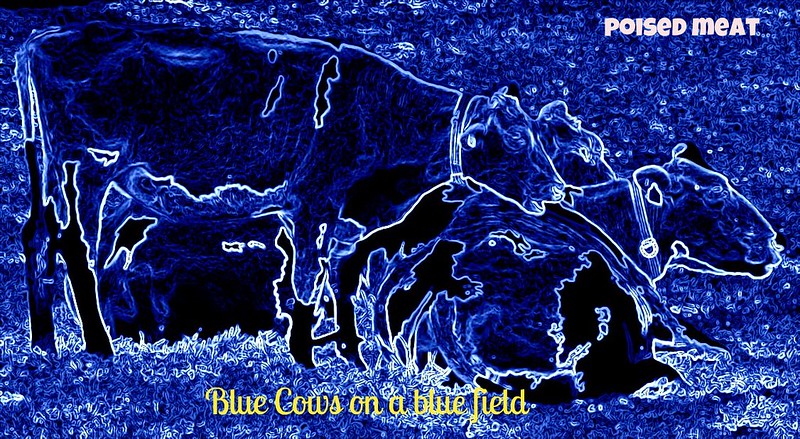 “What do you think Cynthia: my newest masterpiece.”

“Looks like a group of blue cows to me sitting on blue grass Cedric. I hope you are not hanging that one of the wall in the living room. I had enough of the green spaghetti hanging in the kitchen. Every time I serve spaghetti I have to turn the picture to face the wall.”

“Oh, I thought you would like it, but don’t worry, I was going to hang it in the bedroom.”

“No Cedric, I do not want blue cows hovering in my bedroom, but I have an idea. Let’s give it to your mother for Christmas. I am sure she would love it.”

“My mother is a vegetarian and I am sure she would not appreciate it. By the way did I tell you that when I showed it to Farmer Giles in the village, he was totally enthusiastic and would love to have it.”

“Fine with me, then give it to Giles. Where is he going to hang it.”

“He said it would look wonderful in the cow shed.

“Just the right place, I am sure his cows would appreciate it.”

“Cedric I just received a phone call from farmer Giles. He has a problem.”

“He is not sure, but he says his cows are now producing blue milk and one of the cows has given birth to a blue calf. I told him you would call him back. Where did you get the blue paint from Cedric?”

“I bought it on the market from an old lady, it was very cheap. Come to think of it she did look rather strange. She had a sort of hooked nose and a pointed hat.”

“She didn’t by any chance have a black cat and a broomstick as well.”

“As a matter of fact she did.”

“Did you happen to buy the paint at the end of October.”

“Let’s just say you will have a lot of explaining to do to Farmer Giles.”