Write a post about the topic of your choice, in whatever style you want, but make sure to end it with “…and all was well with the world.” 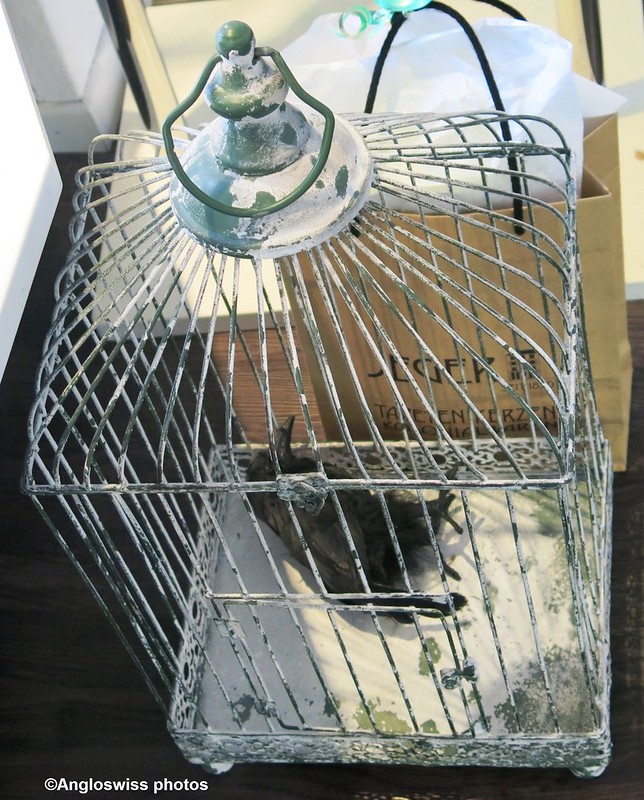 Going to the hairdressers is always an adventure. Waiting for the hair washing experience is never boring, at least not at my hairdressers. The last time I was confronted with a dead bird, although stuffed, it was dead, not flying or breathing just laying on the bottom of the cage. Probably it wanted a feather cut, but the hairdresser did not have a suitable instrument for trimming feathers, and so the bird died in frustration.

This week I was ready for a new experience at the hair thief. My hair had grown to a unmanageable length and it was time to have my normal short back and sides, with a little frim fram on the top. Mr. Swiss offered to act as chauffeur as he also had a few quests to fulfil in town. He does not go to the hairdresser, but does it all himself. He is really very independent. I wonder if Bruce Willis also does it himself, they both have the same cut. Short back and sides and also on the top, all done by machine. I did it once, but since I have been banned from taking the machine into my hands - I wonder why?

Anyhow we arrived, but he said he would go further and so I entered the hairdresser. There were greetings uttered by all, and as Heidi, my hairdresser, was busy with a creation for someone else I took a seat. I was about 20 minutes early. “How’s Mr. Swiss?” she asked. I told her he had brought me to town but had now carried on further. She was disappointed, mentioning that she had not seen him for some time. Actually he does not usually go to a lady’s saloon, but Heidi also happens to be one of my neighbours.

I was disappointed and then she added “but if you are bored waiting, you can continue with the puzzle”.

“What puzzle?” I asked and she pointed to the large window of the hairdresser saloon. In front there was a table and on the table the half completed shape of a jigsaw puzzle showing our town of Solothurn. I thought “why not” so I said down and began to study what had been completed and what should be completed. In the meanwhile the pedestrians on the small street outside observed my efforts. 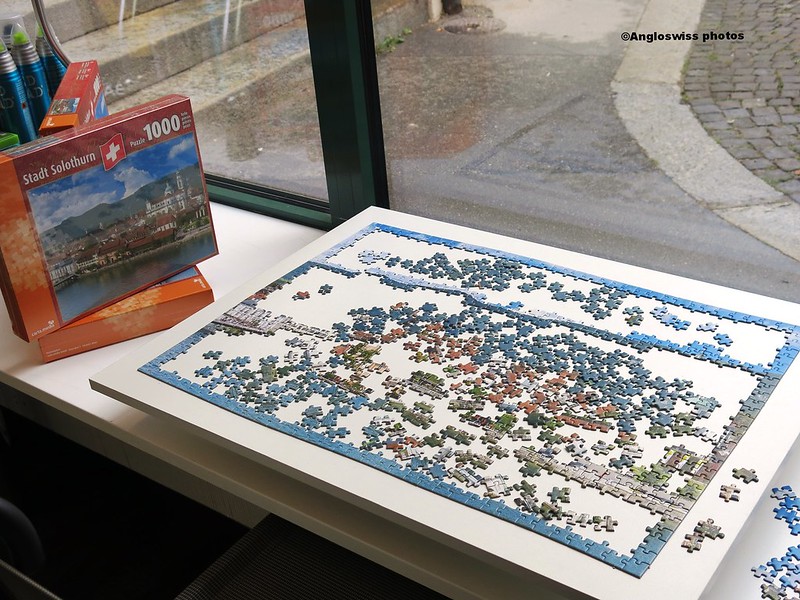 Again I was glad to have my camera with me for a photo. Next to the uncompleted jigsaw puzzle was another board with the remaining hundreds of pieces to be fitted. Immediately I had a thought “would Heidi be finished with the hair cut before I had completed the jigsaw puzzle”. It was one of those puzzles with lots of water and sky in about seven shades of … wait for it - blue. It was a child-friendly puzzle. I am usually quite good at puzzles, but it was at least five minutes until I found two pieces that fit, somewhere in the river. I tried to connect some sky parts, but they refused.

In the meanwhile Heidi said goodbye to her satisfied customer and called me for a hair wash.

“How is the puzzle progressing?” she asked.

“Quite well” I lied, “I thought I would leave most of it for the next customer”. I do not know whether she believed me, but she had already began to snip away.  And then Mr. Swiss walked in. It was a real friendly get together. He decided to wait outside in the garden attached to the hairdresser’s saloon and was soon in conversation with the other hairdresser, who was in between customers.

Heidi and I were talking about this a that during the hair cutting operation and suddenly she appeared with the hair dryer.

It was a painless operation, I was probably talking so much I did not experience my hair being removed. Mr. Swiss was then called from the garden. By then he was on first name terms with the other hairdresser.  I had to interrupt his conversation so that he could give his approval on the new haircut. He found he now had a new wife and was happy.

I paid the bill, said my farewells to Heidi and …… all was well with my hair - no sorry the world.
Posted by Pat Gerber-Relf at 15:59