Daily Prompt: From You to You 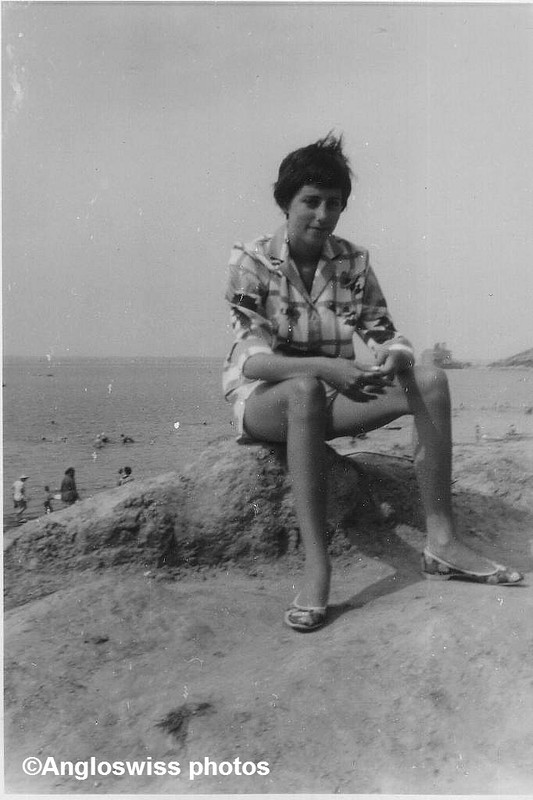 At the age of 14 I really had other things to do than read letters. I probably was about 14 years old in this picture, dressed in the latest Marks and Spencer fashion blouse, known as a scarf blouse. I was quite proud of that blouse as I picked it out myself. You might think how lovely and slim she is, but I remember that holiday well at the Isle of Wight in England with mum and dad and my aunt, uncle and cousins. I had shortly before recovered from an attack of scarlet fever. The skin on my hands and feet had just finished peeling, something like a banana skin, after going through a bout of very high fever and probably the fresh sea air did help me on my way to recovery.

We often spent our holidays on the Isle of Wight. It was a couple of hours train journey from London to arrive at the coast, a place called Lymington where we caught the ferry over the Solent to Yarmouth on the Isle of Wight, an island South of the english coast. We usually stayed at a holiday camp and had our own apartment, my uncle’s family staying in the apartment next to ours. The time was spent on walks on the Tennyson Downs which was along the cliff tops. It seems that the english poet Lord Tennyson lived for 40 years near the downs. Wikipedia tells me the poet used to walk on the downs almost every day, saying that the air was worth “sixpence a pint”, even cheaper than a glass of beer. As it was an island there was beach everywhere and I managed to get my colour back in the sun. In the evening the holiday place had entertainment in the bar.

Dear me, carry on regardless, you did it your way would be about the only words I could tell myself. My head was full of Beatles songs, Carnaby Sreet fashion in London and Mary Quant who was the fashion designer of the time. I think that Vidal Sasoon hairstyles were approaching and the Rolling Stones were appearing in the Marquis club in London.

I was heading for my GCE exams at school which took place two years later. My week-end entertainment mainly circled around Saturday afternoons when I attended a local football match, (the game with the round ball) either at West Ham United or Leyton Orient, although I am not really sure of the time when all this happened. At the age of 68, when you reflect on the past, things get a little mixed up with their order.

And now to write a letter to myself in 20 years. Huh? At the age of 88 I probably am thinking about downloading the free Windows 20 programme. This morning I took the plunge and told my computer to go ahead and give me Windows 10 with all the bells and whistles. I checked yesterday and discovered how I could remove the tiley surface, which reminded me of a primary school picture book. Windows 10 clapped their hands and sent me a mail to say I was now in the waiting list. It might take a few hours, a few days, a few weeks, even a month, but eventually I would get my free download/upload. I would just have to take my place in the queue. So in 20 years, at the age of 88, I will definitely have Windows 10 and will be planning for Windows 20. I am sure Windows 20 will be just a chip implant in my brain, if my brain is still functioning. Otherwise I am sure they could slip the chip in next to my pacemaker which I will probably have in 20 years. Yes. windows 20 will throb constantly on my computer.

I was actually not going to do this prompt, as I found it so stupid, but you see perseverance is everything. You just have to understand the meaning of life and the daily prompt and everything will be OK.

Labels: daily prompt, from you to you