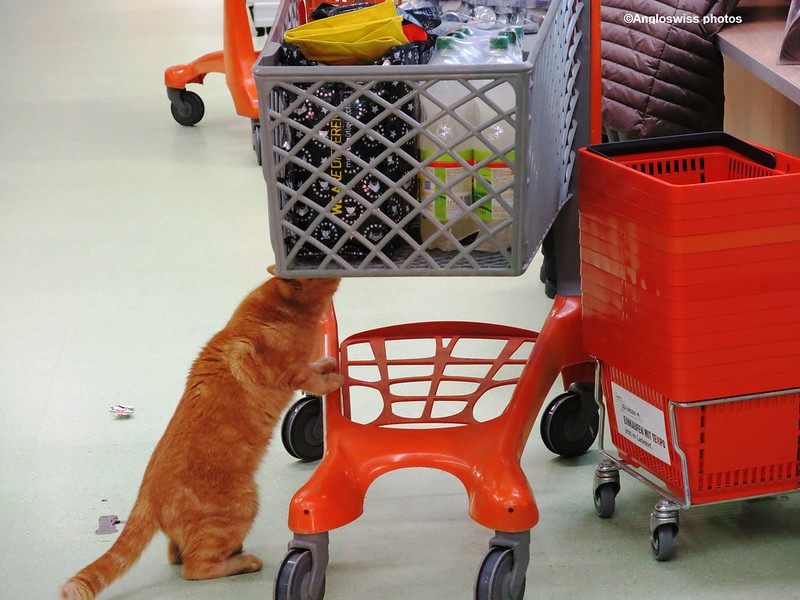 “You see Fluffy, our agent at the supermarket is communicating.”

“Yes Tabby, but what is being communicated?”

“It is obvious. The human that bought the items in the trolley has something that the feline wants.”

“Do you think the human noticed?”

“Probably not, humans are not as clever as felines, but we can always try.”

“I suppose it is due to their lack of telepathic communication. Humans always have to form grumping noise, things to hurt our ears. Totally unnecessary. What a lovely world it would be if silence prevailed, just interrupted now and again with a few hisses and growls. None of that “leave it alone”, “stop sharpening your claws on the furniture” or “do you want a tummy tickle”. Just a few waves from the brain would do it.”

“Unfortunately Fluffy, the humans do not have brains, at least not as well developed and advance as the feline brain. Even their ears only have six muscles each in comparison to the 32 muscles in each of our ears. We should sympathise with the animals less fortunate than we felines.”

“Shall we have an international “human day” in sympathy.”

“Do what? No Fluffy, that is not a good idea. They are under the impression that every day is a human day and we do not want to give them wrong ideas. They might even cancel our weekly supply of tuna fish and with the mistaken logic that “pellets are good for felines” we would only be fed on those tasteless boring machine made items.”

“But Tabby, I quite like the pellets, especially the chicken flavoured ones.”

“Fluffy, I sometimes despair. Baste says in chapter 933, verse 45 “felines should be fed on organc food.”

“Fluffy, natural products, birds with feathers and beaks and mice with tails. Not uniform brown pellets. Even Mrs. Human says that organic is healthy.”

“”Fluffy, I despair. Sleep is healthy so let us partake in a few hours and awake refreshed to our meow world.”
Posted by Pat Gerber-Relf at 17:10