Take a complicated subject you know more about than most people, and explain it to a friend who knows nothing about it at all. 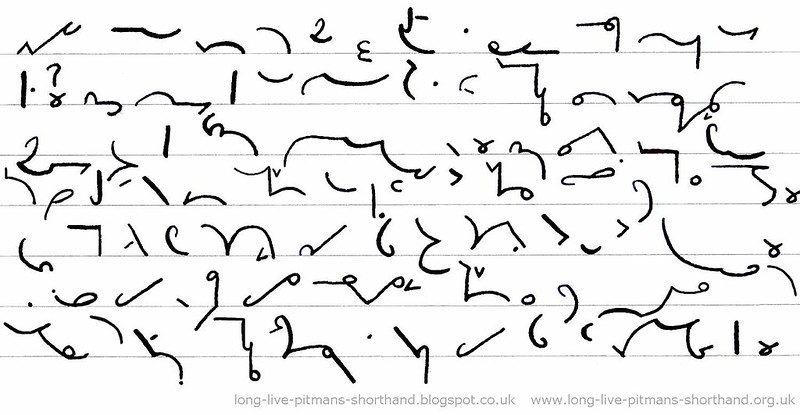 The only complicated thing I do today is “Walking on snow” which I avoid when possible. There are no rules, there is no way “How to”. We are basically all dummies on snow, so I decided to leave this subject to someone that can do it, like the Yeti.

On the other hand I could give you all a dummy course in stenography. You know the quick way on how to jot stuff down that someone is dictating. If you were attending a political summit conference and the powers that be are deciding to slice up some significant country, then it is important to get it all straight in the notes. What did you say? Oh, today is the 21st century and we don’t have to take notes, we have other means like iStuff. I know so we will go back in time when the “i” was not yet invented, the pre “i” days, when I was growing up and we had to depend on our intelligence.

Stenography is a means of writing to save time, and so you only write what you hear. If you have hearing problems, then go back to knitting or other complicated things like handwriting and don’t bother. So where were we, yes? The dots and dashes are for vowels and the little lines and curves are for consonants. Of course they are not just dots and dashes and it depends on where the dot is for the actual sound of the word. If the dot is above the line then you write it higher. It might be on the line and in some dark cases it is below the line. This turns the word, as an example into “bat”, “bet” and “beat” adding the lines for a “b” and a “t”, although the lines are often halved when writing a “t” or “d” meaning that you only really have to write the “b” in a halved size. Are you with me? Of course, we are all dummies and dummies recognise dummies. Not all consonants are lines, some are curves. Oh I forgot, use lined paper and a pencil when writing. The pressure on the line is important. A “t” is a light stroke, but a “d” is a heavy line, bold and shouting to be heard.

Writing the word “love”, you will begin the word with a curve, being an “l”. Love is writing on the line and the “v”? Yes that is another simple step, the “v” would be a little hook at the end of the “l”. If you had been loveD, it would of course be a half curve and if you had lived, well that is another kettle of signs. It would be written as an “l” with a little hook and beneath the line, and the “l” is halved in its size. This is fun, I am sure you are enjoying it all. Now we can progress to shortening the shorthand, to clarify things and speed it up considerably.

“Thank you for your letter” is often the beginning of a correspondence, but as this phrase often occurs we swing through the words with curves and only write “thank for your letter” all in one outline. As “letter” has a “ter” at the end the sign is doubled. As we are now at the advanced stage of shorthand, we have began to omit the little dots and dashes for vowels as we recognise the word by its outline. What did you say? I am going too fast. Well shorthand has to be fast. Imagine recording the Gettysburg Address (write Gettysburg with two little parallel lines beneath, because it begins with a capital letter) you would have to keep up with what he was saying. Luckily it was not a long speech, but an important one so it had to be his exact words.

Shortand can also be applied to foreign languages quite easily as you are only writing what you hear and the exact spelling is applied when writing it in longhand, although a knowledge of the foreign language is required. This could become complicated. The sign for the word “the” in english is a dot on the line and the sign for the word “a” a dot in the air. However, German has approximately 9 ways of saying “the” according to the grammatical case. If you are German this is no problem, but if you are a typical candidate for “the German dummy” you are not too sure of the correct way of saying “the”. It might be der, die, das, dem, des etc. etc. which is not so good if you only use the dot on the line and you would write the wrong word. This also applies to “a” - ein, einer, eines, einem etc.

In the meanwhile I am putting on my special snow proof shoes with the sharp profile, wrapping myself in three layers of quilted jackets and taking my ski poles as support for a walk on the snow. Yes, I agree, that would have been easier. Oh yes I can write Pitmans stenographie, I applied it for many years in my office career and I even passed my exams in the commercial class. It is all a matter of writing what you hear as Sir Isaac Pitman, its inventor, said.

Click here for more
Posted by Pat Gerber-Relf at 16:51