Your home is on fire. Grab five items (assume all people and animals are safe). What did you grab?

I have been there and done it before and do not want to bore you all with my last experiences, and to be quite honest I have nothing new to say.

“Mrs. Angloswiss, you cannot do this.”

“Why not Wordy, you are doing it all the time.”

“But we want to hear what you take with you.”

“Wordy I can tell you one thing, if you happen to be on a visit at the time, I will not take you with me. I am sure they can reshape a pile of melted metal into something worthwhile: like a robot that only brings something new?  No, no forget it, but here is the link to my last attempt on 30th January 2013 if you want to read it again Burning Down the House

And now to something completely different 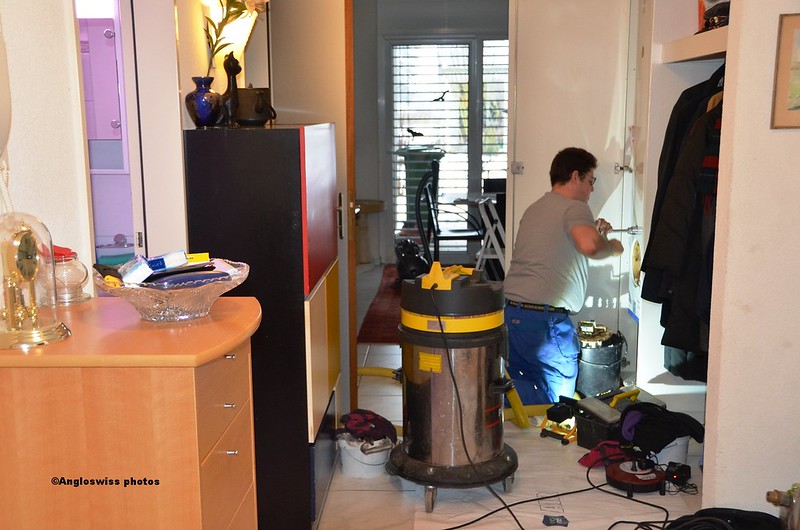 Today was one of those days where things are not as they normally are. After breakfast and the computer check I had to take my daily shower. I usually do that later when the housewife duties are completed, but today was different. We had a visitor and I did not want the boiler decalcifying man to see me in my raw silk nightgown with all the frills and laces. It might have been too much for him.

They arrived on time, there were two of them, the worker and the organiser. The organiser left after deciding what the worker should do and then the worker began. I managed to get a few centimeters of hot water in the kitchen sink to do some cleaning jobs before he started. The first action was drought. We had no water for a few minutes but that was just a first step. The water returned, but cold. I had to mop my floors with a mop soaked in cold water. As we had floor heating this was not so tragic.

He then emptied the boiler water, about 300 litres. I was glad he found a built in boiler drain to do it, otherwise we would have been wading in our apartment and the felines do not like wading. They prefer dry territory.

“You have quite a lot of limescale” the boiler man said. “It seems the last time it was done was six years ago.

We hung our heads in shame.

“But for a two person household I think we will leave it at six years.”

Actually we are a three person household, but since No. 2 son moved out some years ago when it was a four person household, I must admit the showers have been reduced in number, he had a little shower addiction now and again. Not that I am complaining, cleanliness is next to godliness I think they say, so what could possibly go wrong. I am digressing.

There are metal rods in the boiler to trap a large amount of the limescale. Unfortunately these rods do not last a lifetime, at least not a human lifetime, so they had to be replaced. I could hear the tinkle of the cash register as the boiler man uttered his verdict and the rods were replaced. Mr. Swiss then took a closer look at the limescale remains which were slowly piling up. It was then that I sneaked a photo. Just imagine the boiler man was just doing his job and now he is famous across the world for my boiler maintenance. I did it so professionally paparazzi that he did not notice it. He had a lamp with him to discover the limescale. Yes these boiler people are the Sherlock Holmes of the chalk world.

After a couple of hours he was finished and the hot water returned, although with a delay of 2-3 hours until the 300 litres had again warmed up. Our boiler generally only runs during the night (half price electricity), but today was an exception and we now have hot water again. Actually reflecting back to the days of my childhood, we never had hot water from a tap, we had no boiler. We did have electricity, but my late grandmother remembers adding her signature to the list of wanting electricity in our street. I thought of my younger days without hot water and decided even life is possible with cold water.

The boiler man did not leave immediately. He had another important job to do. Being a plumber he replaced a plughole which was looking much the worst for wear. The metal was no longer shiny, the surface being scratched and suffering from 15 years of usage: and I again heard the merry sound of the cash register.

He the packed his tools together, used his monster vacuum machine to suck up the layer of limescale and other remains from the floor, shook our hands and said goodbye. I don’t know how it is in other countries, but shaking hands is quite common in Switzerland. Thank goodness we no longer need a chimney sweep, shaking his hands is not advisable.

Normal service was resumed. I cleaned through the apartment and began to cook our lunch,  spaghetti al tonno (spaghetti with tuna fish), also preparing two small dishes of tuna fish for our felines who were watching my hands with curiosity when I used the tin opener.

I sometimes wish we would have a revised prompt from 1946, I am sure I never did that one.

Click here for more
Posted by Pat Gerber-Relf at 16:49