Tell us about a time when you had to choose between two options, and you picked the unpopular choice. 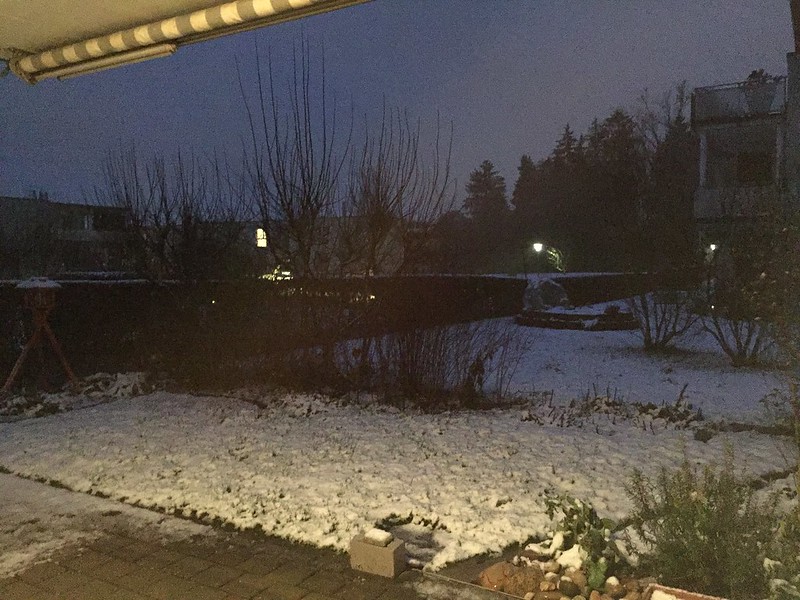 This week it snowed some time in the night on Monday and we awoke to a snow covered garden. To be exact, Mr. Swiss awoke to a snow covered garden, I was still in bed thinking about arising. This was the popular choice for me and it was also the popular choice for him. It is really according to how you look at it. He took a photo and so did I, but an hour later when the dark had become light. His photo is more interesting than mine capturing the lighting effect of the early morning on the snow.

Otherwise picking unpopular choices never happens really. Today my option was to arise after my golden oldie midday sleep and move my weary body: either stay in bed and enjoy the warmth and relaxation or move and do something a little more energetic. The unpopular choice would have been the second, but on the other hand I cannot stay in bed all day. I could, but it perhaps would not be advisable. Mr. Swiss had already finished his midday snooze and was in action.

He announced “I am going into town”. My thoughts rotated on the unpopular choice of getting ready, dressing in sensible clothes and accompanying Mr. Swiss. It was inviting of course, Shall I stay at home or go with him? He was ready to put one foot out of the door and I was still thinking about it. It was not a matter of popular or unpopular, it was a matter of doing something I was not convinced about.

Mr. Swiss is now on his way into town for a short visit and I am still at home writing my daily prompt and being satisfied that I did not stress to go into town. Mr. Swiss found that we are now living an “old people life” and who am I to disagree.

Life is full of choices. I remember when I had finished school and been working in the Citiy of London as an office worker. I wanted more and began to scan the newspapers for a different job. I wanted out, see the world, and searched for something in another country. I wanted to go places and do something completely different. Mum was not happy with my decision and dad did not say very much. He never did actually in case mum disagreed. I found a job advertised in the newspaper for Hamburg in Germany working in a shipping company. As I was already working of the P & O shipping company in London, I decided this would be ideal. I wrote and got a refusal as the job had already been given to someone else.

I was disappointed, but I then realised that I wanted out from my daily boring routine. In the meanwhile I had changed my job in London and was working temp. This was my sort of thing. I was employed by an agency where they supplied office craft for various places where someone was perhaps ill, away on holiday, or just a job where they could not find anyone to work. I was getting a super wage, had no holidays, and no insurance. I was a temp. Every week I was sent to a different office, a different company, and I loved it. I still had the yearning to go and asked the agency if they had jobs in other countries. They did not.

I eventually applied for the job as a secretary in Zürich and was successful. I began making plans for my journey and finishing my London life. In the meanwhile. I left for Zürich and deiced at last something completely different. Some time later the company in Hamburg had written to say that they could now offer me the job as the person that accepted the job had now left. Mum did not tell me about this offer, I was already in Zürich at the time.

This had nothing to do with unpopular or popular, I just took the first opportunity which lead to meeting Mr. Swiss after I changed my original job in Zürich for another job in Switzerland. Who knows how life would have developed if I had gone to Hamburg. For me there is no such thing as an unpopular choice, just a choice.
Posted by Pat Gerber-Relf at 15:57