Tell us about the top five places you’ve always wanted to visit.

It’s too late. It is often too late to do the things you wanted to do, the words you wanted to say, the visits you wanted to make. For me time is running out, although I hope there are still a few years daily prompts left.

The five top places are no longer five top places because the world is changing. The Turks have shot down a Russian plane and the Russians are to happy about it, threatening revenge, so that is two countries I will not visit, although seeing the Hagia Sophia Istanbul or visiting Lenin’s remains in Moscow would have been interesting. I have never seen the pyramids. My dad saw them at the expense of the British army in World War II and even has a photo of himself with a camel. That was a real adventure holiday for him. It seems that all the interesting places are at the moment under siege, dangerous, or out of bounds,  so I stay where I am and visit the supermarket, the local river, the next town (with roman origins), the castle on the hill just across the road and hope to wander over to the other side of Switzerland one day to  visit No. 2 son. He will be visiting me on Sunday with his wife to celebrate a golden oldie birthday, mine. 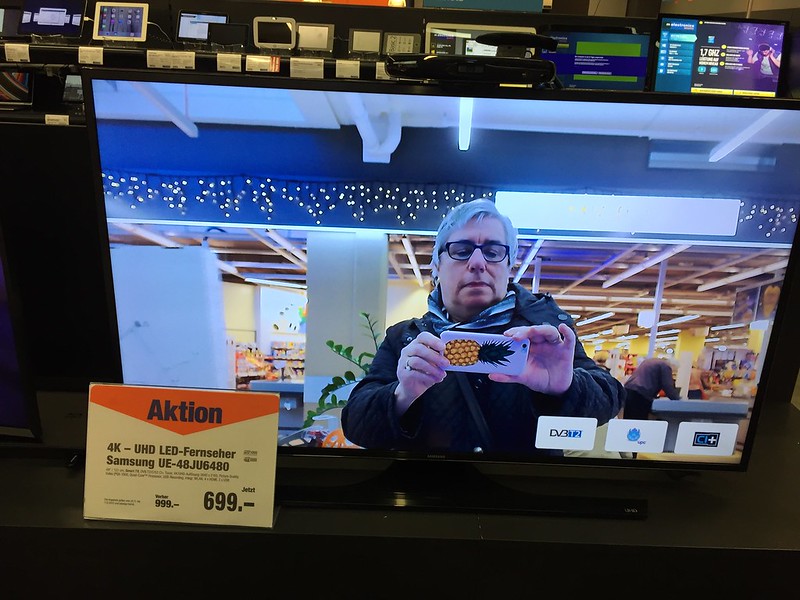 In the meanwhile I meet the world at the local supermarket. I hear many foreign languages being spoken, who needs to travel. It was only Monday when I realised that I had become famous. I had paid the bill and was walking to meet the man of my life who had proceeded to the kiosk at the exit. And then …..yes, I saw myself on the TV. There is a row of TV sets as you leave and I saw a familiar figure on the screen. she looked just like me. It was me. The George Orwell experiences are ever present, and it seems that Big Brother was watching me. Somewhere there was a camera following my every move. Of course, this was a photo never to be forgotten. Who has to travel half the world to see the Great Wall of China when it all happens in the supermarket?

I approached the screen and discovered I was almost life sized. I raised my iPhone and shot a photo quickly. Someone might have been watching and shaking their head at the antics of a rusty golden oldie taking photos of a television screen. I did have my camera in my bag, but the iPhone does just as well. The price tag 699.00 Swiss Francs was my value on this TV set. At last one of my dreams was fulfilled. I was on the television.

When I was finished I quickly looked around to see if anyone saw me, but I think the people were too occupied with paying at the cash register to notice an old lady taking photographs with her iPhone, an imitation teenager. I was in the process of going when something caught my eye: yes another supermarket wonder. It must have something to do with the season. 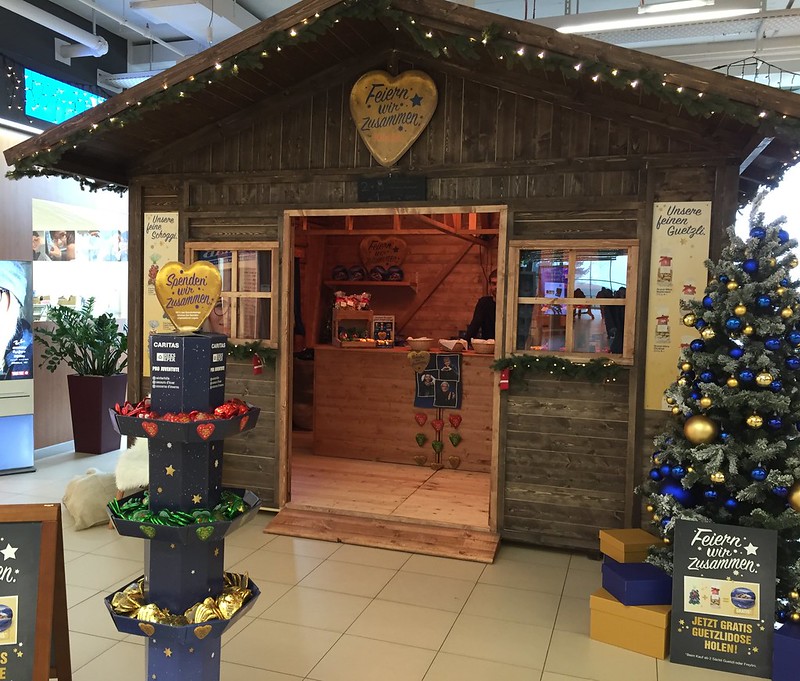 A Swiss chalet had been built complete with Christmas Tree and various chocolates. A poster was saying “let’s celebrate together” although I did not actually have the intention of spending my Christmas celebrations in the local supermarket. I stood in my typical iPhone photo shooting pose and pressed the button, twice: always take two photos as the first might not be so good, you tend to shake a bit at my age. I noticed a young lady from the corner of my eye who had stopped walking suddenly to allow my photographic effort. She did not want to ruin my perfect photo. I made a signal that I was finished and she proceeded to the chalet. I then noticed that she was the lady who was in charge, giving out chocolate hearts to the customers.

It was now time to go, Mr. Swiss would be worried wondering if I had been kidnapped by one of those people dressed like Santa Claus. He did not have the money for the ransom fee and probably would have gone home eventually, tired of waiting. We met at the exit something like Rhett Butler and Scarlett O’Hara, but not quite (yes I was exaggerating again) and he swept me off my feet to the car where we departed for home. Who needs the top five places when you have Mr. Swiss.