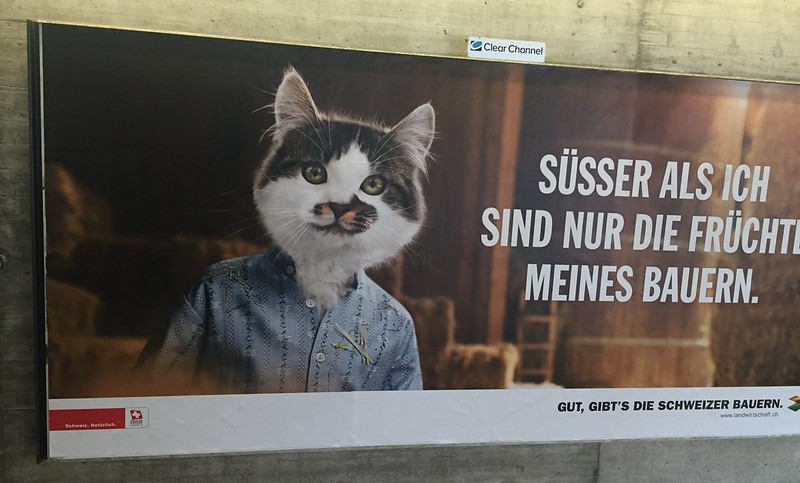 This morning Mr. Swiss and I decided to go on an excursion - how exciting. He treats me at least three times a week to a car ride to the local supermarket, so sweet. Of course I take my camera with me, I always take my camera, you never know. As we left the car Mr. Swiss moved to the machine where you pay for the parking space I noticed a poster, so out came the camera and I was taking a photo. The feline on the poster was dressed in sort of farming gear and the words translated say “Only my farmer’s fruit produce is sweeter than me”. I really found this a fantastic print, what imagination.

Unfortunately to take the photo of the poster, I had to stand back to get it completely into the picture. I was using my mobile phone as I can upload the photos quicker when I arrive home; just a few manipulations into my Flickr app.

“Are you finished, you are blocking the path for everyone” said a distraught Mr. Swiss, whose only thought was to make life enjoyable for me with the shopping trip. Actually there was really no problem, because the other people were avoiding me and making a circle around me, not to disturb my photographic efforts. Me, in the the way? Never.

We continued with the shopping, meeting a few people on the way and eventually had two bags full of produce, not exactly from the farm, but to cover two dinners and evening meals.

We were approaching the car, Mr. Swiss in advance, as always and then I realised that my photo of the poster was not really that what I wanted. A close up of the feline would be so sweet in my collection of 16,000 photos and so I stopped to take another photo.

I heard a voice on the far side of the car park where our car was waiting to be saddled for the return journey. It was Mr. Swiss.

“I am taking another photo.”

“But you took one when we arrived.”

“I know, but it wasn’t a good photo, so I am taking another one to be sure.”

Why is it that people that do not take photos seem to have no understanding for those amongst us that are aspirants for a Pulitzer prize. I decided to continue until I was satisfied with my unique photo and here it is. 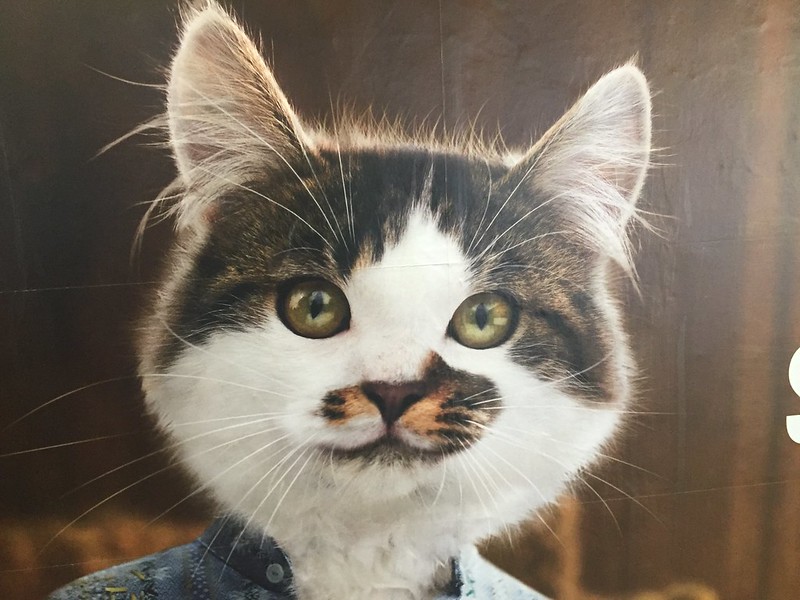 I think the feline looks much better in close-up, a wonderful artistic achievement. Some people really have no understanding.