My topic generator tells me that peace is cheap. I am not so sure about that one, it seems to me that for the sake of peace a lot of people have to die, but let’s not get political. It is too complicated and we all have our own point of view.

Something else came to my attention today, when I did my usual Wednesday visit to the local hunting grounds, know as supermarket. For some time an empty desolated tent had been constructed on the left of the main entrance. The gardening season had passed, carnival is next year and as we don’t celebrate halloween, it could not be for this purpose. Actually the local supermarket really did their best to convince the Swiss people that halloween was something we had been missing out on for the past years. Our cemeteries were quiet at the end of October and the children were deprived of tricking and treating.

A few years ago, the idea was born in the public relations departments in the Swiss supermarket chains - let’s do it. Contact our manufacturers in Hong Kong and China and tell them to produce plastic ghosts and coffins with a hint of haunt. Sweet companies were organised to produce sugar coated mini pumpkins as well as chocolate covered vampires and skeletons or whatever. After all what the yanks can do, so can we. Unfortunately after three years of trying the Swiss gave up and left it to the Yanks. Above all they were losing money as no-one wanted or needed halloween, and the few children that ventured to knock at a door and pronounce their trick or treat threats were either sent away empty handed, or no-one bothered to open the door. No, Switzerland was no a halloween land, although on 1st November the cemeteries are full of visitors paying their respects to the departed. It is All Souls Day and the flower shops do a good trade in selling their arrangements for the grave.

But actually  I started somewhere else. On the left of the supermarket entrance, on 14th October, the secret was aired, and this is what I saw next to the tent entrance. 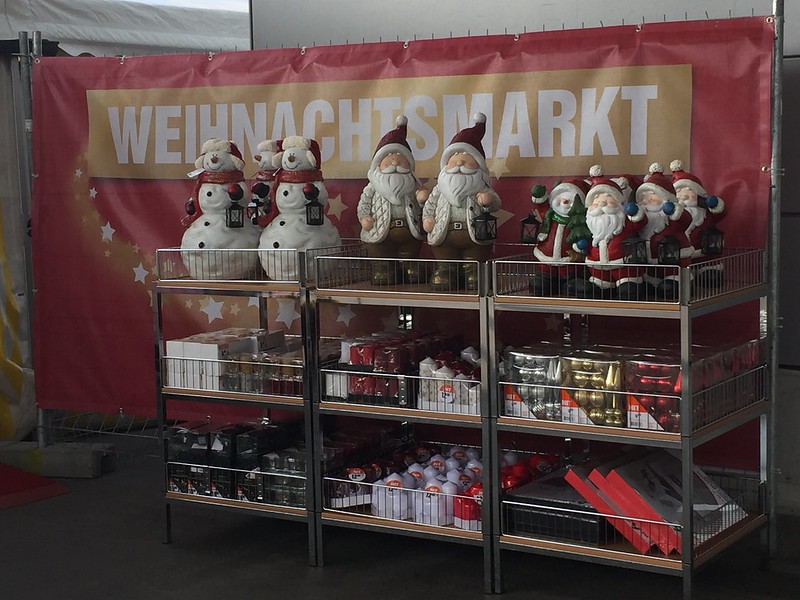 Weihnachtsmarkt means Christmas market. They had arrived, the father christmas, snowmen, candles and decorations for the tree. I felt sorry for the snowmen, we still have temperatures of 8-10°C and they might melt already. Perhaps  it is a good idea to start early. I do not think that my relations would appreciate receiving my Christmas cards in October, but they were also packed in neat see-through plastic waiting for a customer. Perhaps I should phone the local forest department and reserve my Christmas tree to ensure that I actually receive one. I believe there is a text “peace on earth and goodwill to men”, although I very much doubt that it is today inexpensive when I saw what they were charging for these monster mega Father Christmas statues.

I decided to leave it for the time being. First of all I have Mr. Swiss birthday at the end of October, at the beginning of December it is MY birthday, so what’s the rush. I am not sure about the inexpensive peace at Christmas, there is too much money and advertising involved.