Daily Prompt: Ode to a Playground

A place from your past or childhood, one that you’re fond of, is destroyed. Write it a memorial. 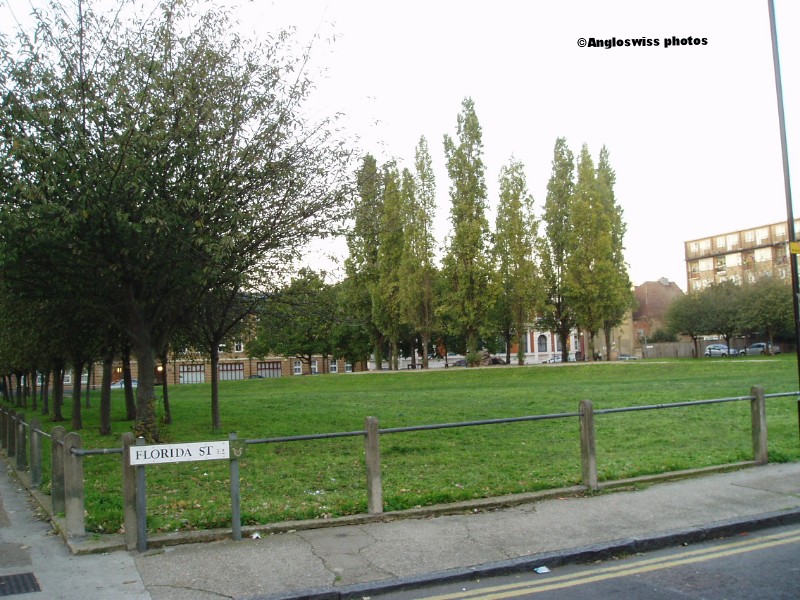 What Playground? The one that was built in 1884 in the East End of London and managed to survive a blitz war that finished in 1945 to fall victim to the bulldozers and rebuilding of London? My playgrounds no longer exist. Norah Street which is now the green lawn in the photo, had about 60-80 houses. Now just a memory, although I was gone when it was demolished. Mum and dad were happy that they could move to a new house with a bathroom and hot and cold water as well as a toilet inside the house.  Our toilet was outside in the garden, next to the coal bunker. It could get very cold in Winter and the spiders loved it. It was their safe home. Of course for emergencies we all had our own “goesunder” which was our name for the pot that goes under the bed. Today they are sold as antiques. Wish I had kept mine, it was decorated with pretty flowers and had a handle of course. How else could you empty it in the morning. Oh the nostalgia of growing up in the East End of London after the war. My playground was the square surrounded by our houses and the neighbours kids and me would play on the road in between. Traffic was not so much in the 1950’s, so we could skate up and down with no danger.

Of course there were school playgrounds. My infants school has now become a boys only primary school and my primary school no longer exists. Yes, also demolished to make way for a modern block of flats. So let’s move to my high school which was half in the City of London in Spitalfields Market. We had a playground, even if we were at the age from 11 to 18. The younger of us would play and the older girls (it was a girls only school) would stand around and compare notes on the latest fashions or boyfriends. Being in the middle of a main fruit and vegetable market, our only entertainment was from the workers in the market that would now and again throw some rotten vegetables over the wall which we would throw back. Today the market has made way for one of those modern shopping areas and there are no longer rotten vegetables or market boys. They have been moved away. You really do not want your english city business men and tourists to be confronted with such low life I suppose.

This is not really a memorial and as time passes you have to move on. Forget good old London with the original places showing where Jack the Ripper committed his murders on prostitutes. Oh yes, that was all in the area. There used to be little old shops on the way to my school, now all gone to make way for a hamburger place or and Indian restaurant and Liverpool Street Station is no longer the old raw concrete building, but transformed into something nice looking made of glass and chrome, all shicky micky. Not to mention the new bank they built with a floor large enough to accommodate four football pitches.

I don’t really like today’s London, it is not the London of my childhood, but you have to go with the times and at least the living quarters now have a bathroom and an inside toilet.

I do Londo revisited once a year to see my 100 year old dad, but one day that will be no more. Then I could perhaps write this again on the next repeat all about my local town of Solothurn.
Posted by Pat Gerber-Relf at 15:58