Daily Prompt: Comedy of Errors (and a bonus assignment)

Murphy’s Law says, “Anything that can go wrong will go wrong.” Write about a time everything did — fiction encouraged here, too!
Bonus assignment: do you keep a notebook next to your bed? Good. Tomorrow morning, jot down the first thought you have upon waking, whether or not it’s coherent.

“Where are you going with the camera in your hand?”. A justified question: it was evening and I was leaving the apartment with a camera.

“I want to take a few photos.”

I added “in the cellar”.

I did not wait for a further question as I decided I would not really have any answers, and so I proceeded on my way. After completing my photo safari in the cellar I moved to the lift for my return journey. We are on the ground floor. Lifts are interesting, you never know what might be inside when they open.

I pressed the button and heard noises in the distance which clearly showed that the lift was ascending and not descending as someone got there before me. One of those people that lived on the second floor, as we only have three floors and the second is the top floor.

I was still waiting, the red light extinguished itself to show that the lift was no longer in action and I heard the lift stop and people made an exit from the lift. Now was my chance. Just as I wanted to press the button again the lift began to move on its own. I heard it descending and decided to wait. Somewhere between the second floor and the cellar it stopped. I realised someone was leaving the building. It had come to a halt on the ground floor. I could hear voices carrying to the outside of the building and the light extinguished again.

Now was my chance, but just as I wanted to call the lift to the basement it sailed away again. I heard voices greeting those that had passed them on their exit from the building and so I realised I was too slow, the lift had again been snapped away by someone entering the building. I was still standing in the cellar, opposite the lift, and waiting, hoping that Mr. Swiss would not be worried.

In the meanwhile whilst the lift was again rising to the second floor (do we really have so many neighbours on the second floor?) I had a brainwave. If the lift eventually arrives I will take a photo of the door opening, it would be a good shot to use one day for a repeated daily prompt.

Actually I was going to use a photo of the grid for this prompt showing how many empty prompts are still in existence of today’s prompt that originally arrived on 27th February 2013. It is a deserted grid. How many of us have abandoned the daily prompt. I had a quick glance at the prompt I wrote in 2013 and discovered that it was not a successful prompt. I followed the instructions with a comedy of errors (based on the truth actually) and it seemed that two years later there were still only 7 blogger likes on my prompt. I could, of course, tell everyone that “I do not care a rat’s arse” about the likes to quote a fellow blogger, but I will not insult the rats.

And now to return to the lift. It arrived on my floor, the red light was gone and the doors began to open, slowly but surely, It was then that I saw something horrific, astonishing, a shock to my system. A strong smell of perfume mixed with vodka, gin and beer hit me as the heavy metal door slowly slid to the left. I hesitated. 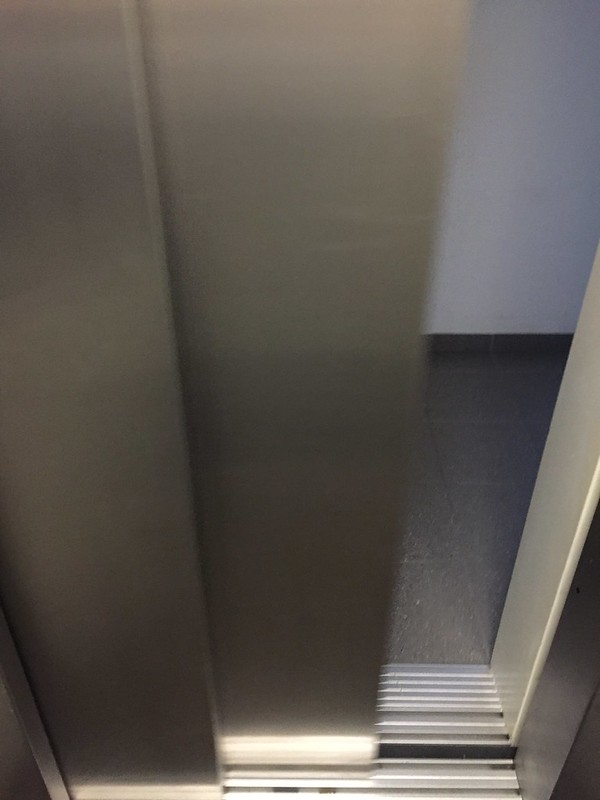 Yes, the lift was empty. I decided to take the stairs before someone snapped it away as I was entering the lift. I no longer trusted this lift.