And in the beginning there was meat

I read today in the newspaper about the new meat rules.

Ugh felt hungry, he always felt hungry, it was just an urge to eat something. He was sitting at the entrance to his cave and a creature walked past. He did not know what it was. He saw that it walked on four legs and had fur on its body, covering layers of meat. Ugh was not bothered whether it was a rat or a cat, even a dog - but it was meat and so Ugh killed the beast. He bit into the flesh and saw Ooh his neighbour who lived in the cave next door.

“Ooh” he called and Ooh came see what Ugh wanted. Ugh pointed to the meat and shook his head. Ooh knew immediately why Ugh needed him. It was only the evening before when Ooh threw two stones at a passing beast. He missed the beast but the stones rubbed each other in the air, a spark arose and the spark set alight to a branch of wood on the ground. Ooh had actually discovered the power of fire and he was happy. It was warm. The beast he missed with his stone throws was also cold and came closer to the fire and Ooh being inquisitive about this new discovery pushed the beast into the fire. There arose a wonderful appetising smell, what we today would probably associate with a b-b-q, although of course Ooh knew nothing about this. He pulled the beast from the fire, its fur being singed which fell off and he sank his teeth into the meat. Ooh was happy.

Ugh came to see what Ooh wanted. Ooh pointed to the cooked grilled meat, which was a little burnt and black at the edges, but Ugh was not spoilt. Mrs. Ugh was not such a good cook, she just picked the grasshoppers from the leaves and ate them together with Ugh. Anyhow Ugh was completely enthusiastic about this new discovery and they decided to call it fr, because their vocabulary was quite limited at this time. In the valley of Neander actions spoke louder than words. So Ooh visited Ugh with two stones and threw them in the air, they landed on the ground and nothing happened. Ugh was about to hit Ooh on the head with a large branch when Mrs. Ugh arrived.

“Ooh fr” said Ooh, “Ugh fr” said Ugh and they realised that woman knew all the time how to do it, but kept it to herself.

And so the Neander developed over the years having descendants. Perhaps he did not live a long life, but there were many wild animals, such as mammoths and hyenas, and other Neanders, that might have shortened his life. We are, however, almost certain that it was not the red meat or even the grilled meat with the burnt trimmings that killed him.

We now leave Ugh and Ooh and return to the present day of Mrs. Angloswiss, who was actually a direct descendent of the family Ugh, although she did not know it as they lived some 200,000 years ago, but she often had good ideas like Mrs. Ugh. 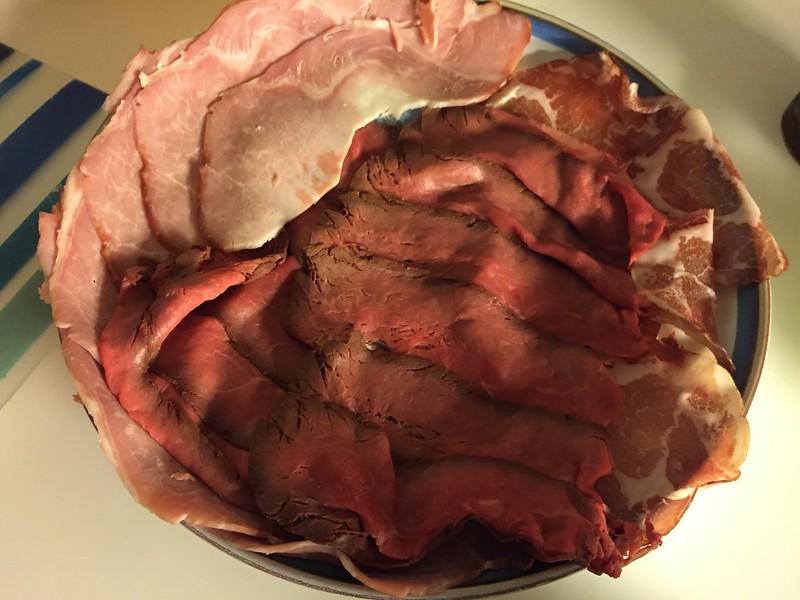 This was part of Mrs. Angloswiss evening meal, served naturally with fresh bread and some fresh cucumbers and tomatoes. She was looking forward to it. It was a good day for food. Mr. Swiss was also happy with his hamburger at lunchtime served with a Swiss Rösti and baked tomatoes garnished with sage and thyme from the garden.

This was until Mrs. Angloswiss read the newspaper, it was an english newspaper, but it made no difference, the news was worldwide and it was clear. There were new meat rules. Processed meat such as bacon, sausages, salami, chorizo and burgers were a high risk to health, even being suspected as a cause for cancer. This placed Mrs. Angloswiss, descendent of Mrs. Ugh, into a state of shock. She was responsible for feeding her family the wrong choice of food. Of course, not only Mrs. Angloswiss, but Señora Italia and Frau Wurst were also concerned. What did not kill the Neanders, the Huns and above all naturally, the Romans, was a danger to our modern day civilisation in the shape of a fried sausage according to the newspapers.

Mrs. Angloswiss decided not to tell Mr. Swiss and they both enjoyed their evening tea with roast beef, slightly red as it should be, ham and coppa. Somewhere in another dimension Ooh and Ugh were watching their descendent and were a little perplexed. They had been eating raw meat until Ooh discovered fire and their cause of death was not the food, but a hungry mammoth, so why the fuss.