Fears evolve over time. What is one fear you’ve conquered?
Thank you, BasicallyBeyondBasic, for suggesting this prompt! 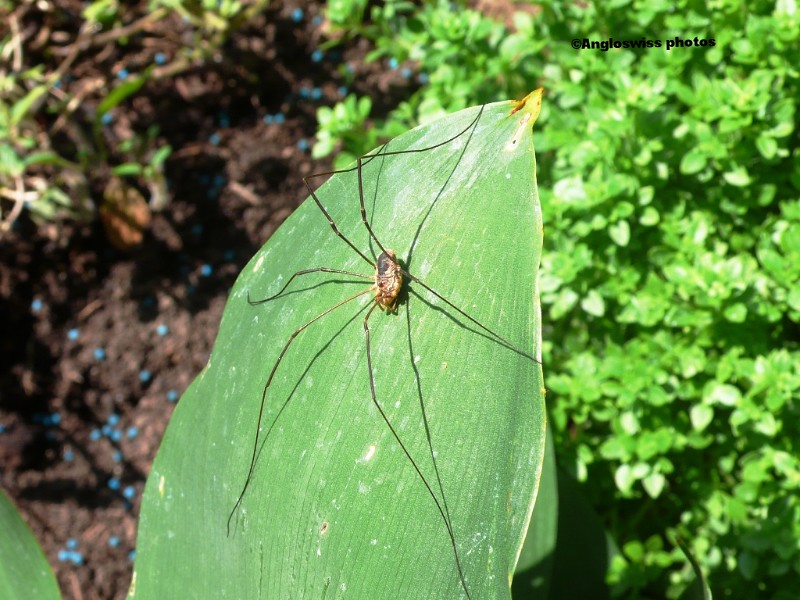 I just discovered that I have 201 photos of various spiders online, and some more in my archives.It seems that I have developed a fascination for spiders over the years, although probably more because they are a good subject for a photo. They do not move so fast, usually hang in a web and arrive in all shapes and sizes.

So why did I choose this particular spider? Nothing special or extraordinary, just big and it is the one that resembles the “daddy long legs” from my childhood. I did not live in a palace as a child, our house would probably be known today as a “slum”. We had no running hot water, no bathroom, just a metal container and the toilet was outside in the garden. The garden toilet was the first memory I had of a spider, no spiders. They were all the ancestors of the one in the photo: big, round fleshy body in the middle and the legs, yes the long legs. I grew up with them, but they were not my friends. As the house was built in 1884 and no-one bothered to make improvements, except for putting a new gas cooker in where there used to be a small fire with an oven next to it, the spiders had handed their home down from father to son(s).

Reflecting I remember my first memory of a visit to the outside toilet and examining in details the whitewashed walls, which were no longer as white as they should be. There he was, sitting in corner, suspended and watching, he was watching me. After a further scrutiny of the surroundings I saw his brother, sister, mother, father and a few smaller examples which were probably the children. Yes the whole family was there. I decided to leave the toilet and seek refuge by mum.

“Mum there is a spider in the toilet.”

“On the wall and the ceiling.*

Undaunted mum arrived and killed them and waited patiently before the door until I was finished. As I grew older my fear that I would be killed and eaten by a spider did not disappear, especially if they began to move in my direction. Was this the reason I moved to another country? I discovered that in other countries there were also spiders, but different, in all shapes and sizes.

So how did I overcome this fear? I had no intentions of making friends with the arachnophobic race of insects, but eventually I had no real choice. Almost 20 years ago we moved into the country where the fox and hedgehog say goodnight to each other, and the spiders were the original settlers, staking their claims everywhere. If a plant grew outside, the spider’s web would soon be anchored in a corner. It was then that I had my first digital camera and I discovered yes, they were a good subject for a photo, I soon had a collection and began to give the spiders names. At first Fred, Joe etc. but then I realised they were a species, not just the common garden spider but with scientific names. I bought a book about spiders and I became an expert.

Some spiders realised that I was no longer a threat and moved into my home, generally in Winter. I was now faced with a decision. Did I want to share my home with arachnophobia? I thought it over. I realised that a spider’s web was a good place for the recycling of flies. Flies arrive in hundreds and are thus not missed when a few are killed with a fly swatter. Why do it yourself when the spider does it for you. And so it came to pass that a few spider webs were kept in strategic places in the home, especially where the kitchen meets the garden in Summer. Both spiders and flies seem to spend the Winter building up their strength for the Summer in secret places.

I can now say I am cured. From the day where I shared the toilet with a daddy long legs, I now send them an invitation from time to time to do their spidery deeds in ridding my home of other unwanted insects and remember it is not a home without a spider.

I would add, of course, that each spider is to be examined to discover what species it belongs to. Suspicious spiders with strange colours are definitely a no go, and if you happen to live in Australia or other countries where the spiders have developed their lethal weapons, then do not invite them. Otherwise, I am no longer afraid of spiders. Now fly children and their lookalikes (known as maggots) are another kettle of phobia, and not my sort of thing.
Posted by Pat Gerber-Relf at 15:55