We have been having a real heat wave, temperatures of over 30°C accompanied, or should I say not accompanied, but rain. It has been dry and hot and seems to be accompanied with all sorts of strange insects crawling around that are rarely seen.

We keep the windows and doors closed during the day and also the blinds. We live in a dark place, but it kept the temperature on a normal almost bearable scaled. When the evening arrived, and the sun had returned to the other half of the world, all windows are thrown open hoping that fresh air would enter the home. Not only does fresh air enter the home but a few flying missiles, known as moths. I don’t mind moths if they are the friendly kind: the months that circle around source of light and eventually turning into kamikaze pilots by burning their wings on the heat. I have no bad conscience, it is there own fault. This week I entered the kitchen and saw this study in black and white sitting on the tiles. 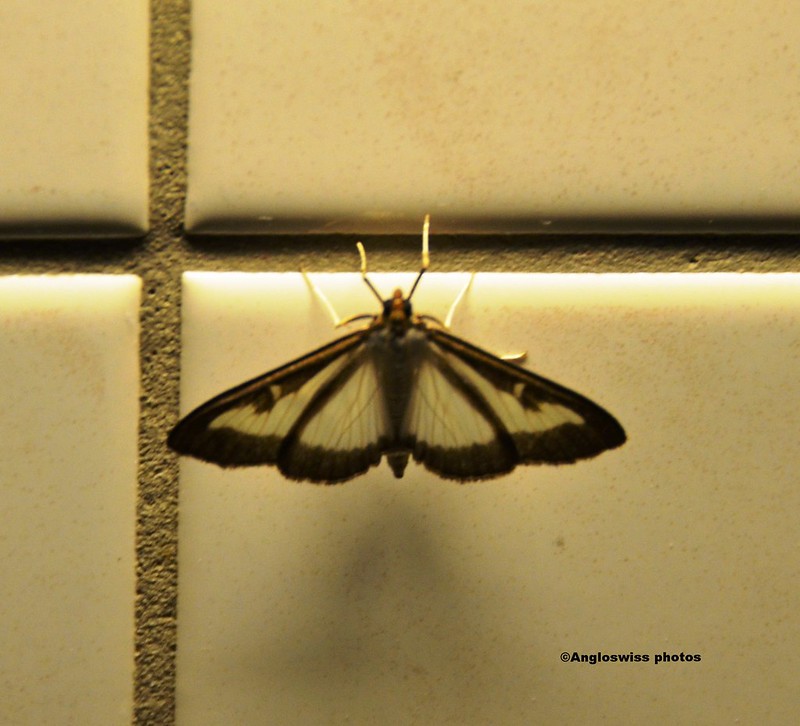 Of course my first reaction was to take my DSLR camera, tune it for a closeup and take the photo of the day. Now what do you do? You feed the computer with the words “white moth with black edges on the wings” and see the result.

You can really always rely on your computer, because I immediately was confronted with photos of my moth and even a name. It is known as the box tree moth. Personally I have no box trees in my garden, but we have a few neighbours that have these specially shaped box trees in containers on their balconies and even some box tree hedges in their gardens.

It seems they originate in Eastern Asia, but found they way to Germany and Switzerland in 2006 where they were discovered. I have strong suspicions that had we had not decided to import box trees for decoration in our gardens, it would never have emigrated to Europe packed in a container with box trees. We always have to interfere and have something different to the others. Personally I am not a fan of these spherical shaped little bushes, they are so artificial in their appearance.
I found him quite a pretty moth and so left him (or her) to his monthly activities in the kitchen. There was no food laying around so an opportunity was not given to lay a few hundred eggs and make the family of box tree moths feel at home. Next morning my moth was laying on the floor, dead, not breathing and not flying. I did not kill it, I am innocent, although if it had still been flying around it would not have had a long life.

It was eventually sucked into the vacuum cleaner and I have  not seen any further examples since.
Posted by Pat Gerber-Relf at 15:25