When was the last time you were embarrassed? How do you react to embarrassment?

Ask a silly question get a silly answer. Embarrassment no longer exists in my vocabulary. I am too old and prefer to watch how the others embarrass themselves by their remarks and actions. 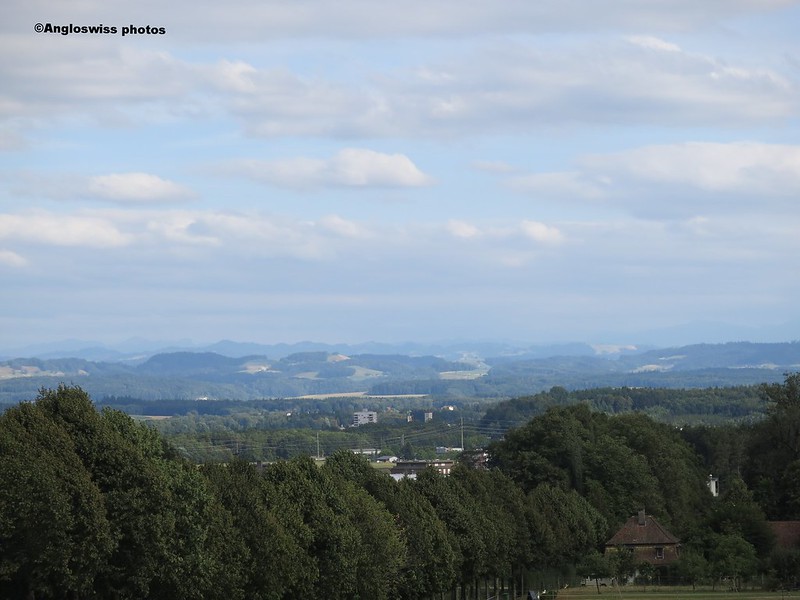 Some time last week, on a day when the temperatures were normal and not burning a path in the garden, I took a walk all on my own. I returned unharmed much to the relief of most of my fans, as  I had a daily prompt to write afterwards. Up on the hill at the local castle I had this view of the so-called Bernese middle land - sounds like something from Lord of the Rings, but we only have Swiss Gnomes and they do not live in the middle land but in Zürich on a large road known as Station Road translated. On a clear day the alps would be visible , but it was cloudy and the alps never make good photo in any case. They have a sort of bluish tone and I never did get the hang of how to do it properly with my camera. The White bits in the middle at the front of the photo would be the estate where I live.

This morning we went on a safari trip to the local supermarket. We packed our iPhones to ensure we could be found if we got lost and had containers for the spoils of the chase. Those supermarkets can develop into treacherous places, especially if you are looking for something in particular. Actually I was. Our local chain of supermarkets, known as Migros, had one of those special actions meaning that each time you paid at the cash desk you were given an hand/armful of folded cards, closed with a perforated edge. Now the surprise is that when you tear off the perforated edge the card opens and you find what you might be given free. Unfortunately the majority of these special cards have only “sorry, next time lucky” printed in the middle with a special hieroglyphical code which could lead to winning a holiday or some other great prize.

Mrs. Angloswiss is a fool for such things and the first time she received about 10 of these cards (given according to how much you spend) she found a prize printed on one of them, she could collect a special container filled with organic herb salt. Now I always wanted a pot of organic herb salt, it was my supermarket dream. Today I searched for my organic herb salt and found none. Foiled again you might think, but to avoid embarrassment (in keeping with the prompt) I searched and found a male assistant doing something to the shelves in the supermarket and asked for help. Yes, I was a damsel in distress, near to tears. This is one of the reasons why I always search for a male assistant, they are young and sympathetic to the problems of golden oldies.  He took me to the shelf containing the organic herb salt and found where it should be. Unfortunately the shelf had an empty compartment where the organic herb salt usually is, but undaunted he searched further and with a glint of satisfaction reflecting in his eyes he found my prize of the week.  I don’t know who was happier, the assistant in finding he was successful, or me getting something for nothing.

Needless to say our lunch was spiced with so much organic herb salt, it had even adopted a green aura when being served. The fried potatoes/hashed browns were green and the steamed fennel also had a coating of green sprinkles. I decided not to overdo it so the chicken filets were left with a yellow coating of spice, which I afterwards drenched in a special Andalusian sauce mixture which is my favourite also available at the local Migros supermarket.

Yes it was a successful day and we returned home tired but happy. Only the potatoes were somewhat tiresome, as they were quite small and I needed ten minutes to peel them, but even that was conquered. I know this is a boring blog, but so is my life, only spiced now and again from a pot of organic herb salt.
Posted by Pat Gerber-Relf at 15:59