My Last Day in Germany

All good things have to end and so my last day arrived. I did not have to board my train from Bulley until 10.30 in the morning so had some time to finish my packing a take my breakfast.

I was awake early enough and then it happened, the noise of planes circling around. I thought we were under siege and then I remembered that somewhere in the area there was an airport. After the war it was mainly used by the Americans but now known as Frankfurt Hahn Airport. As you can see it was earlier in the hands of the Americans, but now attached to Frankfurt.

I thought I was in a Hollywood film with the noise of the planes thundering through the Mosel valley, but I was wrong. It was a normal event and the local vineyard authorities, whoever they were, were spraying the vines against their various complaints, one of which being mildew, from a helicopter. Ok understood, you cannot have all the hard work of producing grapes for wine disappearing under a mildew attack,.

I was ready with my camera poised to take a few action photos when the helicopter disappeared and all was quiet. Just my luck. No problem, said my son’s mother-in-law, the helicopter will return. It had to refuel on the top of the mountain somewhere. Apparently they have to fly upwards to get the fuel because if they would fill the tank around the Mosel river on the bottom of the valley, they would be too heavy to ascend to the vines. The things you learn as a golden oldie. Eventually the helicopter blade turning sound returned and they were back. It was not easy to find them in the background of green vines, but with my usual accomplished talent, I took a photo, no many photos, from the window of the breakfast room. 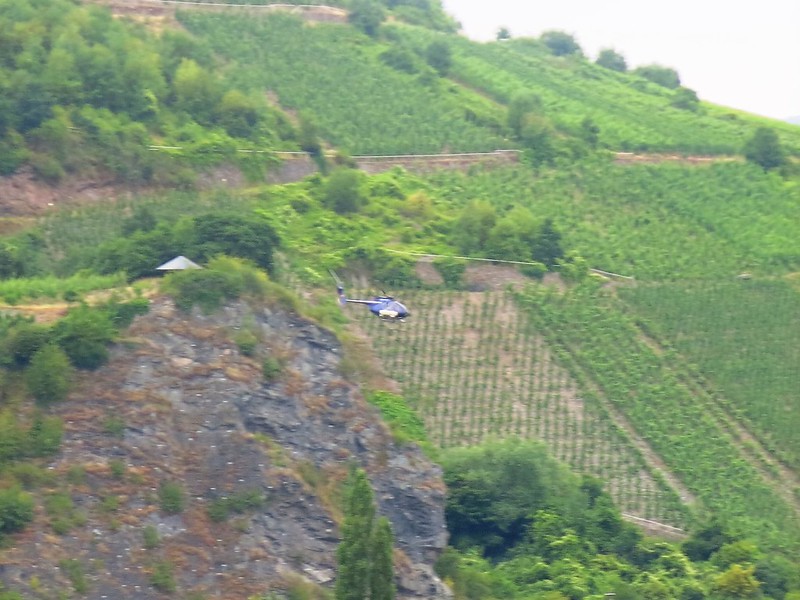 Sorry for the poor quality, but I only had my point and shoot camera with me. The DSLR Nikon would have been too big. Eventually the Hollywood film was finished and after breakfast and saying goodbyes, I departed.

My son took me to the station at Bulley. He planned three-quarters of an hour to get there, although the drive was “normally” about 20-30 mintues. He must have had a sixth sense. When you approach the village of Bulley the last part is crossing the River Mosel on a bridge to arrive at the station and then we saw that nothing was moving. All the cars on the bridge were standing and we were the next to go onto the bridge. We then saw the disturbance. The bridge is not exactly meant for heavy traffic and two cars in different directions could pass each other taking care. Unfortunately an idiot of a lorry driver with Rumanian number plates decided to cross the bridge, meaning that he had blocked everything and was creeping centimetre by centimetre along the bridge. We had to watch and wait until he cleared the bridge without knocking cars from the opposite direction into the river. I could have walked across the river with my case, but No. 2 son said wait, we have enough time and let’s see what happens. The lorry survived and so did we and we arrived at the station where my son placed me on the platform and organised my ticket. The Swiss railway organised all my tickets, but the last return part of the journey from Bulley to Koblenz was not in their repertoire. I hugged No. 2 son and stepped on the train to Koblenz, where I had 10 minutes to wait for my direct train to Basel, Switzerland, but….. Yes it happened again. In Koblenz there was a 10 minute delay for the connection, due to railway work. This did not bother me too much as I like to have some spare time on my railway journeys, although Koblenz is not the most pretty station on the German network. 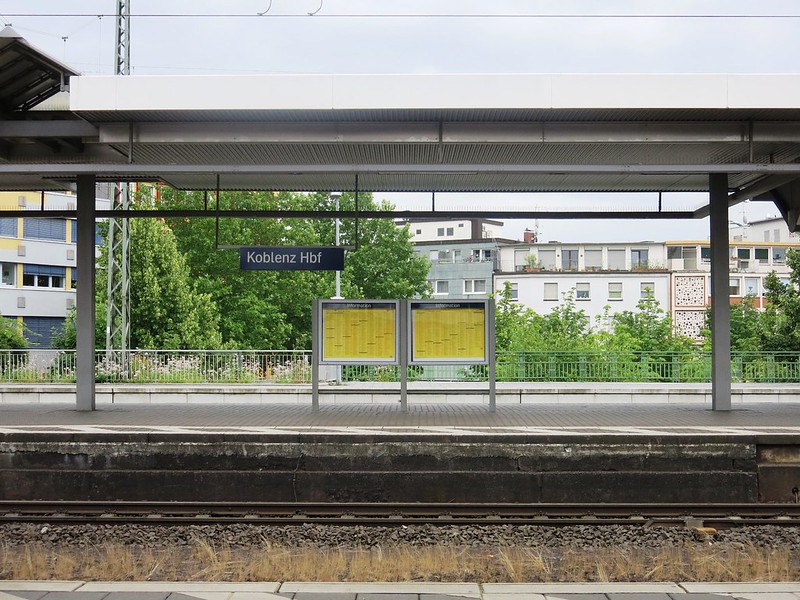 The train arrived and I took my seat. At the next stop, I think it was Main am Rhein, it was discovered that one of the wagon doors on the train was blocked, another 10 minutes delay. I then took the opportunity to tell a young lady in german railway uniform, that I did not like my reserved seat as it was not facing the direction the train was going, but the other direction and whether she had something else. She was very kind an helpful and found a love single window seat in the next carriage travelling forwards. Yes, I know I am very fussy sometimes.

Eventually we arrived in Basel with 30 minutes delay which was the exact 30 minutes I needed for my programmed next train. However, Basel being international, there was another choice and I caught the train destined for Lugano which was non-stop to Olten, where I had to change trains for my destination in Solothurn. I was keeping Mr. Swiss informed during the Swiss part of the journey of my progress, my telephone now on the Swiss network.

I arrived in Olten and what did I see? The train had engine problems and was standing still in Mägenwil. Where is Mägenwil you are thinking, and yes so was I. However the next connection for Solothurn was just five minutes away. At least it would have been if the train was not blocked by another train standing still in Mägenwil - are you with me? This train arrived with 10 minutes delay. I would mention it was a hot sunny day and my last train did have an apologising note not he door to say “sorry for the inconvenience, but the air-conditioning in this train is not working”.

I eventually arrived in Solothurn station to be met by Mr. Swiss who had been searching for a parking place on the station, meaning I had to wheel my case up the slope to meet him. The main thing was I was home again.

I promise that is my last report of my Odyssey to the valley of the river Mosel. No, there is a wedding report to come, but the official photos have not yet arrived. Watch this space.
Posted by Pat Gerber-Relf at 16:09