Tell us about something you know you should do . . . but don’t.

I should stop writing these daily prompts, but I don't. 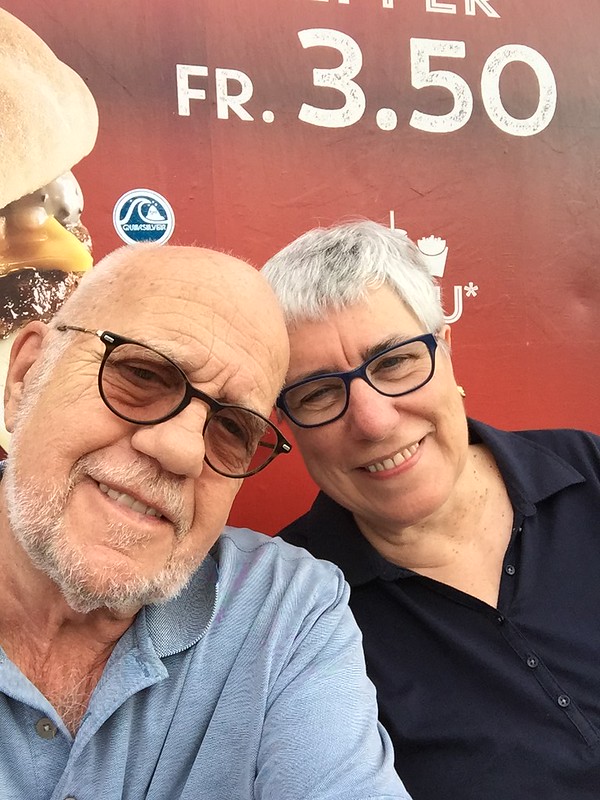 Any bids? Just 3.50 Swiss francs for the pair of us. No problem. We are quite easy to look after, just three regular meals a day, but perhaps not a MacDonalds hamburger which was the actual advertisement behind us. Yes, golden oldie Mr. Swiss did a selfie at the local railway station before I departed for my 5 day trip to Germany, making sure he had a photo to remind him of me in case I decided not to return and he forgot what I looked like.

Otherwise forget the shoulda thing. I mean it is not even english, and there is nothing I should do, but don’t. I now have time to do what I want to and if I do not want to do it, I don’t do it, quite easy, although I do have a bill to pay for my newest Kindle that I bought online from Amazon. Just a flick on the keyboard on my finance paying computer and it will be settled. I am quite happy with my new Kindle voyage. It has an illuminated screen so that I can read it when resting in my coffin during the day: vampire night flights can be quite exhausting sometimes. It also has something called 3g which means I can upload books when I am travelling in far away places. There was a small problem on my trip to Germany. I now have a portable charger and took it with me to Germany. Unfortunately I forgot it in Germany, but No. 2 son arrived this week and brought it with him, so I had to make do with uploading on the computer in the meanwhile. Today I even received a mail from Amazon asking me how pleased I was with my exclusive origami cover and charger. Of course I told them, in Anglo Swiss style, that the origami leather cover was ideal to show off with, after all it was a limited edition. Yes, only the best for Mrs. Angloswiss.

Yesterday evening it rained, not just a short shower, but the real thing soaking the garden at last and saving me a trip with the hose. Today we have normal temperatures, where you do not feel like you are a cat on a hot tin roof. We can breathe again and there is a fresh wind blowing. Even the flies have withdrawn. I had a record hit list of about 6 dead flies yesterday, each one personally killed by my own fly swatter. I cannot bear to see them squirm so I make an effort to kill them with the first swat. Yesterday I was quite annoyed. I settled down to my after lunch golden oldie sleep and there was a fly winging its way over the bed. This fly definitely had a death wish as it was zooming past my ear, settling on my arm and generally being an annoyance. I had to rise to fetch the fly swatter from the living room and waited until this fly settled on the bed. I then pounced. It took two swats, but I had him. Unfortunately his 100 brothers and sisters were waiting to take over, but none ventured into the bedroom, they remained outside on the porch.
Angloswiss Ltd. together with partner, might even be going on walking trips again, although there are a few stormy clouds in the sky. However it will be difficult to encourage Mr. Swiss as he is busy watching the daily stage of the French bicycle race known as tour de France. The riders have overcome the pyrenees and are now approaching Paris where they will partake in the last stages around the town. I am not a bike racing enthusiast myself, but I like to see the scenery as they cycle past various towns.

I so wish we had something more original for our daily prompts, and not things written in a foreign language.
Posted by Pat Gerber-Relf at 16:09