Daily Prompt: S/he said - the state of Europe - It's all greek to me

Pause whatever you’re doing, and ask the person nearest you what they’re thinking about (call someone if you have to). Write a post based on it. 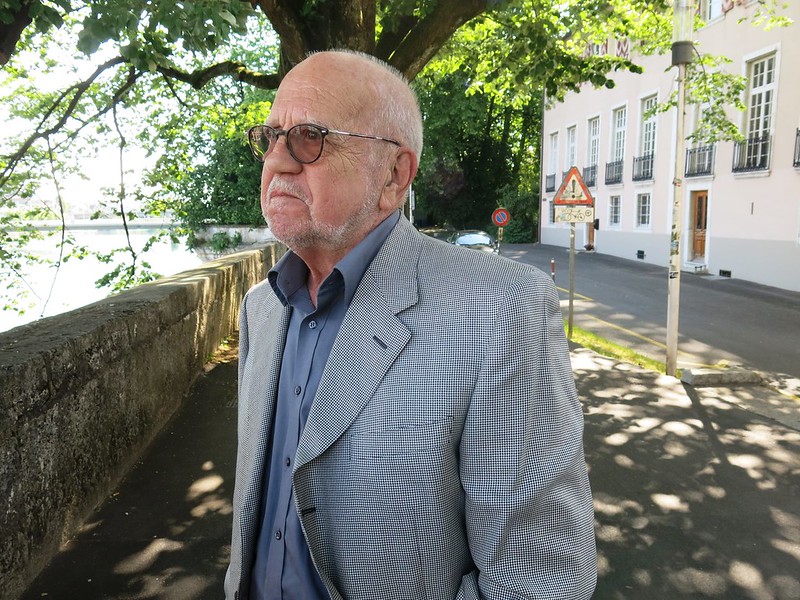 The person at the moment nearest to me is Mr. Swiss who is relaxing in the heat of the afternoon sun, around 35°C in the shade and trying to read something on his iPad, if he wasn’t being disturbed by his wife who is making attempts to tell everyone what he is thinking about. This is not an easy task WordPress, it requires a certain amount of diplomacy and fine feelings which I do not have and I am not getting helpful answers.

I asked “what are you reading on your iPad”, and I got an answer - yeaaa. He is reading the Solothurn News, our local newspaper, and is particularly concentrating on the state of affairs in Greece. Actually Greece has been a main concern of Mr. Swiss for some time, as Greece is also the concern of Angela Merkel (the chancellor of Germany), so you see he is in good company. Why Greece? Is he thinking about planning our next Summer holiday paying a visit to the Acropolis or perhaps one of those nice little islands in the sun. Of course not, the problem lays deeper. Greece is a threat to Europe. They were a threat when they joined the EU, because they were broke then, had no money, and forgot or did not tell the rest of Europe about it. They still have no money, and the future of Europe lays in the balance. Can Europe exist without Greece? What is more important are the Greeks that are rushing to their banks and picking up their hard earned savings before the banks close down, no longer having money. Of course the rich Greeks have money, but not in Greece, perhaps in a Swiss bank account. The wealthy Greeks do not even live in Greece, they are probably counting their Euros somewhere in Monte Carlo or the South of France.

Mr. Swiss has become an expert on the Greek situation in Europe. He is keenly following all TV discussions which seem to go round in circles talking about the same thing. During this time of Greek problem solving, I remain outside on the porch reading something on my Kindle. He does not need my advice and I would only disturb his thought concentration. Today the newspaper tells us that we have a European day of fate. The Greeks will be voting whether to stay in the EU or not. The Greek finance minister, Mr. Varoufakis describes the Greek creditors as being “terrorists”, meaning the rest of Europe. Once again I am glad Switzerland did not join the EU and so it’s not my problem. Ok, of course it is my problem, but I don’t really bother with it. I leave it to those that understand what it is all about - no names mentioned.

I really do not think this post is leading anywhere. Now and again Mr. Swiss passes a comment about the hot summer days and checks to see that all windows and doors are closed and the blinds are closed on the windows. Tabby and Fluffy my two felines are inside in a lethargic state. They do not move, are conserving their energy and having dreams about their fur coats having zips so that they can be removed.

Me? I am sitting on the porch under the sunshade and a large umbrella to shelter my sensitive skin from the sun’s rays beating down. I even get a sun tan in the shade at the moment. Our automatic lawn mower, known as Mowey, has just done his half hour journey in the garden and now resting. “I want a baseball hat when I am doing the job and what about something to drink afterwards” where his last words. He is no sulking and said he will not mow the grass again in the sun without a sun shade.

An ambulance has just passed through our village with its doo-dah noise from the local hospital on its way to another village. This is happening at least once a day at the moment. I have strong suspicions that they are collecting golden oldies that are suffering from the heat. I am surviving in the heat tanking up on cola with more ice cubes than liquid at the moment.
Posted by Pat Gerber-Relf at 15:58