Think about an object, an activity, or a cultural phenomenon you really don’t like. Now write a post (tongue in cheek or not — your call!) about why it’s the best thing ever.

We all have computers and if we want to used them we apply a switch somewhere, lights begin to flash, internal noises may occur (I have an Apple so no internal noises) and a fan might be involved somewhere to keep it cool. That is our part of the work. We choose a web site, which probably is already fitted into our tab system and we are ready to go. What are the people on the other side of this wonder work of cybernetic mystery doing? Nothing really, because we have pulled all the right stops. Daily Prompt probably has some sort of random choice programmed integrated in their masterful site. I don’t even think a human is involved. Same time, same place the grid appears showing todays choice of prompt. I am strongly of the opinion that not even the humans (if there are any in the WordPress organisation) know what today’s prompt will be.

This is very clever. It means that wage bills are reduced to a non existing fact. You do not pay machines to choose the daily prompt as no humans are involved that have to pay taxes, use their brain to decided what to do next or even visit the canteen for the daily hamburger. It all runs on its own.

Somewhere in Silicon valley there is a building where machines are whirring, cogs are turning and various lights are flashing to show that the prompt is arriving. The Daily prompt is no longer a living thing, it is dead. The only living things dealing with the daily prompt are us, the writers. We, who are sweating blood to produce something of interest to show that we are still interested. Some of us even pay for this dead prompt strategy for the privilege of having a .com addition at the end of our website address. I am one of those humans that do this. Even this is automatically added to my credit card once a year. I receive a message that the cost of my .com will be charged to my account. If I no longer wish this to happen I put a cross in a box or something like that. This would mean that my web site would still exist, but without the .com bit at the end. Naturally when you have a .com, it would be a disappointment to lose this, and so like all other computer vegetables I allow this to happen. I am paying a machine to grant me a .com address. Even my felines meowed for a .com and so they have one as well on their own site.

But I am still here, writing my daily blog. Actually today I have a purpose in my daily prompted life. I must come to a close as I will visit the local garden centre. It is the end of July and my garden needs two rudbeckia plants. I actually bought three this year. One is flowering nicely, the second is thinking about it and the third decided not to appear. I have an appointment with Mr. Swiss in half an hour to visit the neighbouring village of Zuchwill where the garden centre is. How exciting and romantic: holding hands and taking a walk through the garden centre. In the meanwhile to keep everyone happy and to prevent more groans, here is a photo of the rudbeckia plant, taken in the neighbouring bed in the grounds of our apartment. 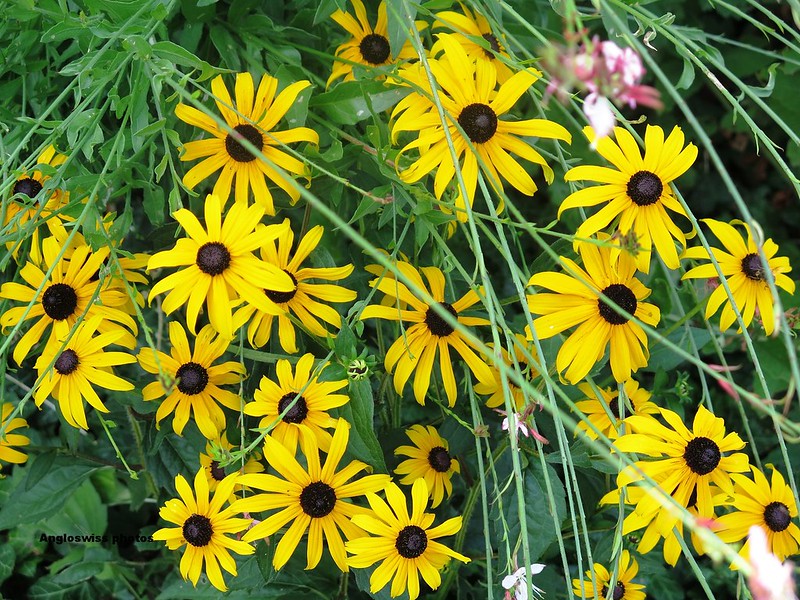