Daily Feline Prompt: Sweet Meows (are made of this)

What is the best dream you’ve ever had? Recount it for us in all its feline glory. If no dream stands out in your memory, recount your worst nightmare. Leave no frightening detail out. 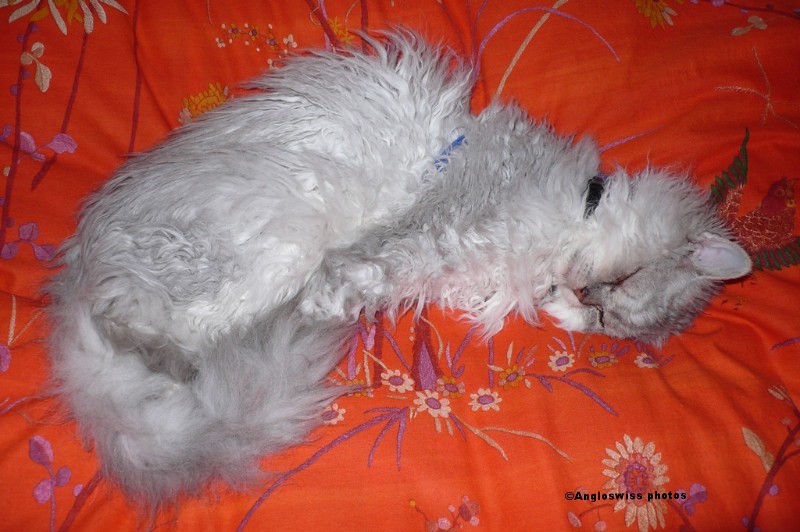 “The best dream I ever had was when I fell into a tin of tuna fish.”

“Fluffy, that is not realistic. Tins of tuna fish are too small.”

“But it was a dream and it was a mega tin of tuna fish and dreams are not realistic.”

“Of course they are Fluffy. I dream every time I sleep about realistic things: birds, mice, defending my territory against other felines.”

“But you never defend anything against other felines Tabby, you usually run away and disappear through the cat flap.”

“Remember the famous words of Walt Disney “if you can dream it, you can do it”.”

“He also said “all your dreams can come true if we have the courage to pursue them”, but your courage seems to disappear once you see another feline. But Walt Disney was a human Tabby and humans have bright ideas that do not usually work out. And I still haven’t seen you defend our territory from Roschti, the ginger tom that lives next door.”

“Err Tabby, I don’t think Roschti takes our feelings into consideration when he walks through our territory ignoring you.”

“He ignores you as well Fluffy.”

“Don’t change the subject and I do not run away from him.”

“I know, you hide beneath the table and wait for him to leave.”

“Oh, let’s dream the feline dream of taking over the world.”

“But we have Fluffy, it is just that the humans do not realise it - yet.”
Posted by Pat Gerber-Relf at 16:48

Labels: cats, daily feline prompt, Sweet Meows (are made of this)