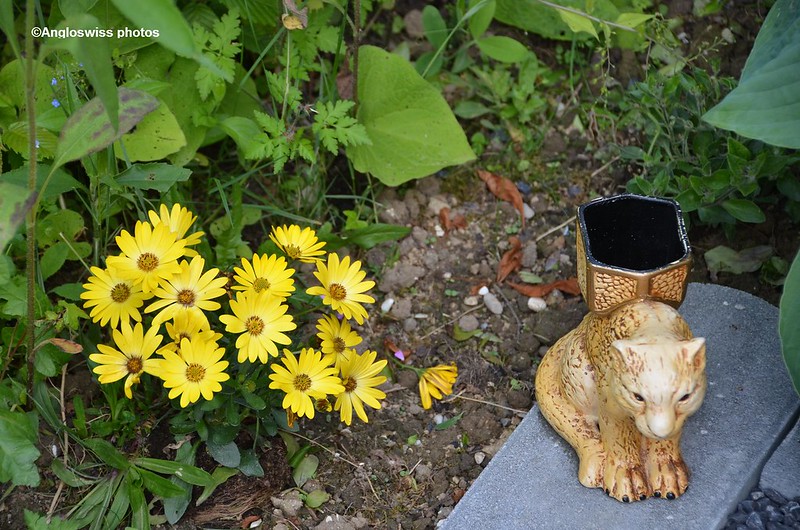 This is one of the few things I still have from England. Ok, it is not a toy. You do not play with leopards made of china. I believe it belonged to my grandfather, who probably picked it up on a visit to one of the cheap markets in the East End of London (when no-one was looking). Actually we had two and mum said they were book ends. Obvious they originated from the British Victorian era when Britannia ruled the world, or thought they did. The animal (a leopard?) had a partner and they both formed two ends, having books in the middle. Books were not a great thing at our house, so they usually sat on granddad’s fireplace ledge wondering what their reason for existence was.

On the other hand they both had a container on their back, although I do not remember what it contained: probably dust and a home for spider webs. One day on a visit to England I said to my dad I would like to take them with me to Switzerland. This was no problem, I think dad was glad to see it go, yes, it was now an it. Them no longer existed as the second piece of this unique suspiciously valuable creation, has broken. Someone dropped it. Now it has found its place in my front garden where it guards my flowers. I just had a brainwave. Perhaps a small potted cactus could be placed in the container.

Way back in 2013 when I was still young and lovely (correction I am still lovely, perhaps not so young, but that is a matter of how you look at it) I wrote my toy story Original Toy Story 2013. I told everyone that I was born and had a childhood and my childish hobbies were playing with stuffed animals and guns. I did not grow up to be a taxidermist and neither did I join the mafia (my knowledge of the Italian language was not sufficient and my family did not originate in Sicily) so what more can I tell you.

I am now living in the middle of the Swiss civilisation. I thought the Swiss would grow up with crossbows in memory of William Tell, or perhaps they would play with cheese fondue sets, having fun melting cheese and showing mummy how good they were at it without burning down the house, but no such thing. I remember my oldest son growing up with lego, his favourite building programme being constructing a record player and using my 45 rpm discs as a completion to his task.  He was always very musical and now helps the local rock bands in town as a roadie when they have a concert. His record collection is a couple of thousand CD’s, so the lego beginnings were pointing him in the correct direction.

My second son was more into drawing, although unfortunately he was not discovered as a second Picasso. As he got older he progressed to a so-called Carrera Racing track and it became quite dangerous to cross the floor in the living room with a chance of being knocked down by a speeding car which ran on a track by some sort of electronic system. Unfortunately he did not become a second Clay Reggazoni (Swiss driver) or the Paul Newman of the film racing world. He passed his driving test eventually (less said better done) and has now limited his driving experience to European roads in a normal car.

Mr. Swiss tells me he was busy learning to be a locomotive driver, probably dreaming of riding over the Gotthard pass with two locomotives pulling the train. It is quite steep and one locomotive is not enough. The Swiss like to do things in style. In later years he changed the train driver target to becoming a drummer, but on a real drum kit, and that stayed, the result being that we do have a drum set in our hobby room and another in his rehearsal room. I always thought that playing piano would have been better, because you do not have to take the piano with you when having an engagement, there is usually a piano already waiting. Taking a drum set means taking up half of the room in the car and assembling it when you arrive for an appearance. When you are tired and weary after a gig with the band at midnight, you again take it apart, load it into the car and assemble it again when arriving home.

I see no connections between my life now and my childhood. The grandaddy of computers, ENIAC, has only just appeared in the States in 1946 my birth year, otherwise I would probably have got there before Bill Gates and the gang.
Posted by Pat Gerber-Relf at 16:21