The Cat Sat on the Mat

I was in the basement of the local supermarket with Mr. Swiss. We were looking at some new cushions for our outside furniture as the others had suffered due to the outside weather conditions. We always buy new ones every year. Unfortunately due to a misunderstanding and golden oldie forgetfulness we forgot to measure at home before choosing new ones. I remained in the basement at Mr. Swiss transferred to upstairs where they were settling the exact chairs we had. He sent a distraught assistant to the basement to fetch a measure so that she could measure the chairs they had to ensure we bought the right size and I was left to my own distractions. And then I saw the cat, so I removed my camera from my bag and began to shoot whilst waiting, this was a must.

The cat sat on the mat was the first sentence I learned in my first reading book at school. Just a stupid start to a life of reading. However, this cat decided to take it literally. 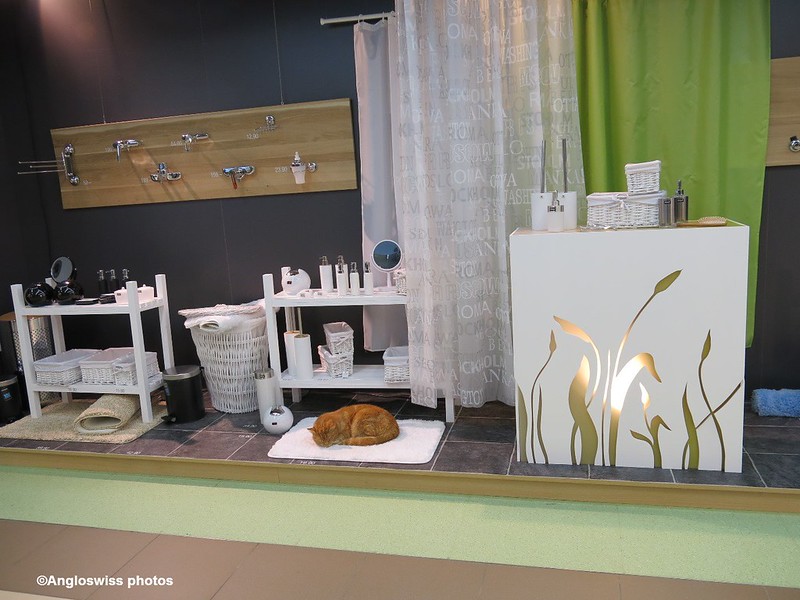 Can you see the cat amidst the surroundings of the advertised bathroom equipment. Cats are not stupid, if they are tired they sleep and do not wait until they go home. There are so many opportunities for a place to circle into a land of dreams and what could be better that a comfortable bathroom mat with its soft poster in a supermarket. To explain, this ginger example of the feline race lives somewhere near the supermarket, there are actually two and if you are lucky you find them both. You never actually know which feline you are photographing as they are lookalikes, but I suspect that while this one was sleeping in the bathroom the other was probably making himself comfortable on a chair in the restaurant.

So let’s have a closer look. 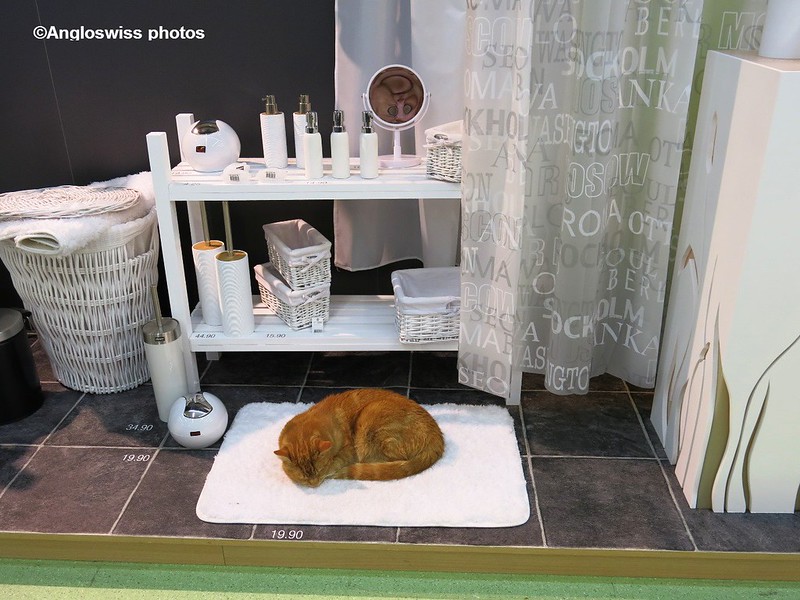 I was wondering if the price of nineteen swiss francs was for the feline or the mat. In the meanwhile three other shoppers took photos with their smart phones as they were walking past, another gave him a tickle between the ears which the feline did not actually enjoy. This cat wanted to sleep and not be a victim of human endearments.

Mr. Swiss eventually arrived and could not find me as I had met a lady I knew and was carried away in my conversation about the cat and other female things. He called me on his iPhone and I answered and what a surprise, he was only around the corner looking at the cushions for the garden seats. Unfortunately we had a little misunderstanding about the exact size, so as the problem was not so urgent, we decided to measure the ones we already had and wait until the next  shopping safari on Friday. We need five cushions and there only had three in the supermarket, so what’s the rush. We then departed and the cat slept on as if nothing had happened. The feline now had an audience of at least five shoppers.
Posted by Pat Gerber-Relf at 21:48