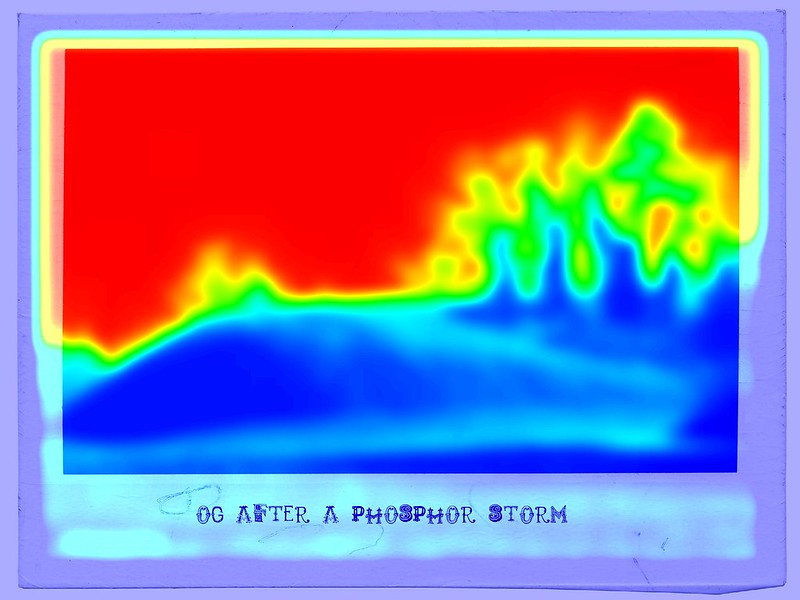 I was sitting in my favourite chair, watching my favourite television program, when the lights went out. “Strange”, I thought, especially as the television was still in action. Even stranger because there was no electricity, at least it seemed so. The complete street illuminations were extinguished and inside my house all electrical gadgets were out of action. No accompanying humming from the refrigerator, the lamp in the living room was dead, just the television was still working, but not showing my favourite programme. So what was it showing? Well I think it is called “white noise”, sort of a screen with lots of sparky stripes and noise.

Suddenly it stopped. The screen became black and there were signs across the screen. They were large at the top followed by smaller signs at the bottom and then it appeared. Well I have to say it, it was even coloured, although not exactly in accordance with human colouring basics. It (he or she) was blue with no hair, one eye in the middle of the head and ten fingers on each of its three arms. Then suddenly subtitles appeared whilst he was talking in a language which seemed to consist of just consonants and no vowels. Everything just pressed together with a bit of moisture in between, the strange thing being that the subtitles were in English.

“Good evening viewers, we are proud to present the first interstellar television programme from planet Og” were the words printed on the screen. It then continued:

“Viewers I am sure you are surprised, but not as surprised as we are. We have been trying for many ogomins (our time measurement system) to transmit television programmes from our planet to other worlds. Due to a remarkable similarity in the earthly satellite system, we have now had our first breakthrough and are pleased to show some samples of our programmes, transmitted with the courtesy of Ogovision. Yes viewers, we have been watching years of programmes from your world, our favourites being mainly the cowboy films, which show a great similarity to our own historical background. Of course, we had no cows, but our bongos are very similar. At one time they were driven in hordes from one side of the storm desert to the other by groups of bongogs, brave Og citizens supplying fresh bongo meat to those inhabitants that had no bongos.”

Now this is interesting I thought and then suddenly there was a flash on the screen and the following was transmitted.

“Drink Plop, now available in the special saving box. Loved by children and women and when mixed with the pink variety, also available in licensed restaurants, only for masculine Ogs.”

Then there appeared three female Ogs, at least I think they were female. They were also blue, but had quite a thick layer of orange fur on their heads and sang in a high pitched voice.

“Plop, plop, plop
Makes you hop, hop, hop
Bring it home in a box
It’s even good for a glop”

Then the original speaker returned.

“That was our commercial break and now for the news. There has been trouble in our capital city of Oggo. School children are complaining that they are no longer allowed to come to school on their Glinkos. Glinkos have now been banned, as their digestive system is ruining our roads. The acid content of their pellets tends to burn holes in the road surface. Here is an interview with our minister, Mr. Glook, responsible for transport.

“Mr. Glook you have had many complaints from our school children who say without being able to ride their Glinkos to school, the will need much longer to arrive, and there is the problem of the Glinko’s daily exercise.”

“Yes, well we have examined this thoroughly and found that the children have been very careless with the Glinko. They just put the female and male sort together in the same stable which has lead to an increase in the Glinko population.”

“Is there no other solution than to ban the use of the Glinko?”

“At the moment we have to take immediate steps to stop the Glinko population explosion. A medical solution is being developed to control the birth rate, but the children will just have to have patience until this is applied.”

“Thank you Mr. Glook, and now back to the studio.”

“Well here we are again in the studio. We will now have to break up our transmission for this evening due to phosphor storms on the Og surface. It was a pleasure to be able to transmit to planet Earth and we will return tomorrow at the same time.”

Then there seemed to be an interruption in the Og television studio and another Og person spoke quietly to the commentator. He then returned with the following comment.

“I would like to apologise to our television viewers on Earth. It seems by this pilot production that the complete electricity supply on Earth came to a halt. Our Ogian engineers are working on the case and we hope that tomorrow this little accident will no longer occur. In the meanwhile, we Ogians love you all, especially your cowboy films. We have one small wish. Please do not show any science fiction films in the evening. It hurts our feelings and our children cannot sleep afterwards.”

The screen then returned to the “white noise” syndrome and the lights went on again. I was not very happy as the beer had got warm in the refrigerator in the meanwhile, but I decided I would definitely tune in again tomorrow evening at the same time. At last something different to watch on the television and not the same old boring programmes.
Posted by Pat Gerber-Relf at 15:47