We each have many types of love relationships — parents, children, spouses, friends. And they’re not always with people; you may love an animal, or a place. Is there a single idea or definition that runs through all the varieties of “love”?

I know what love is, so what’s the problem? and now to something more intelligent. 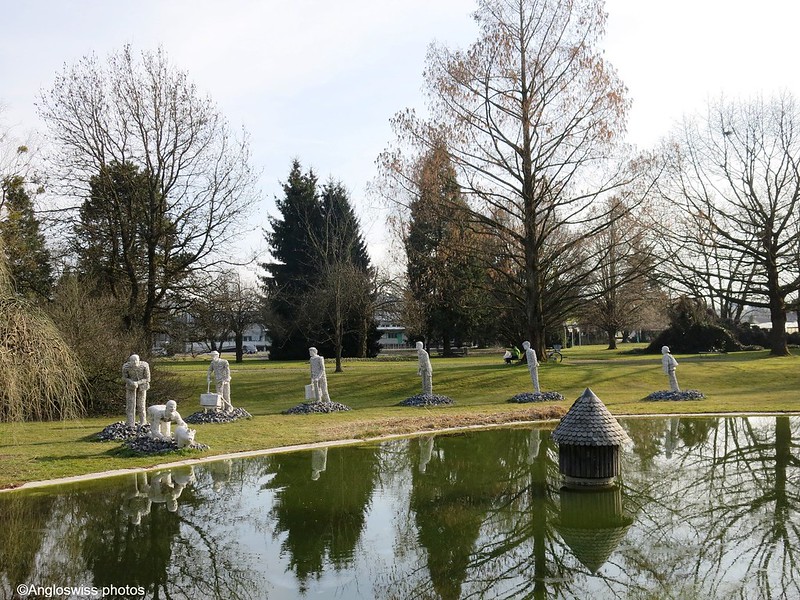 Lately I have been feeling the Spring so I go out more and yes, I love walking and enjoying the fresh air. Last week I went places and saw things, but not without my camera. Friday afternoon was a little different. Mr. Swiss and I did not really know whether to go or not and then I made a suggestion. There is a garden centre nearby with a park attached, so we decided to take the five minute car journey to the village of Zuchwil and pay a visit.

Our garden at home is now ready to go and there were a few ornaments to replace which had cracked under the cold and snow. I should have put them in the cellar during Winter, but did not realise that they could freeze. We had a look and found a statue of an owl and a meercat. I fell in love (look WordPress I love) with the meercat. He was standing up ready to call his pals and I had to have him. In the meanwhile Mr. Swiss was choosing an owl from the selection they had, as he is not a meercat person.  We put our trophies in the car and then took a walk around the accompanying park.

As it was early Spring with a nip in the air (a very cold nip) there was no fantastic flower exhibition, just a few crocus and snowdrops, but we found sculptures they had bordering the small lake they have and so I naturally took a photo, or two, or three. If you look closely they represent the seven ages of man beginning on the right with the child and ending with a bent human frame ready to go. As we were now towards the end of our afternoon exercise I found myself somewhere between No. 6 and No. 7. I found them quite well made and very original.

Here is a photo of our front garden after the gardeners had put it in order. If you use a magnifying glass you can see my meercat standing in the opposite corner. 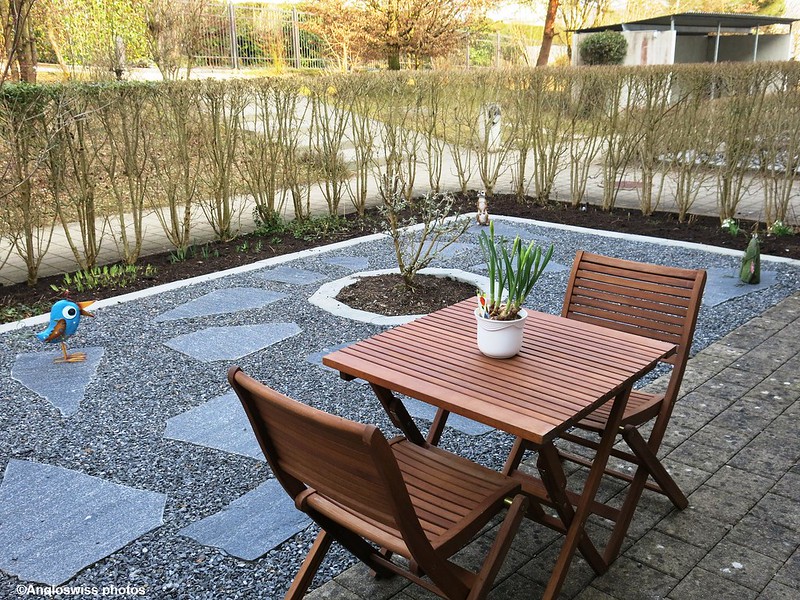 So I did it and survived. On Tuesday a walk to the local cemetery via the local stables and chicken coop. Wednesday a walk along the river bank without my camera which I still regret. Next week I will definitely visit the river again, the ducks and swans are waiting. Thursday it was the cemetery again and Friday the local garden center.

Today was another keep fit walk to the local castle. Mr. Swiss was particularly proud as the castle is on top of a hill, as most castles, and I made it. I got there in one piece and was glad to see four benches at the top for the weary travellers. Afterwards we met a friend of ours. She was also taking a walk along the same path, but in the opposite direction. She was so pleased to see me again. She did mention that she saw Mr. Swiss now and again on her walks, but he was always alone and she found it wonderful that I was with him as if it was some sort of exception. Mr. Swiss congratulated me on my successful walk as he decided I had now achieved the status of being worthy to go walking with him. At the beginning we had some problems, he was always ahead and I had to catch up, but I was taking photos. Today we arrived home together at the same time despite the fact that I was still taking photos. Admittedly my strength was waning when we finished our walk, but I keep that to myself.

Tomorrow is Sunday, a day of rest, but neither of us go to the church, so I am wondering what he has planned. Of course this whole walking thing has turned my time table upside down. Throughout the winter I spent my afternoons writing my daily prompt, reading and other such restful pastimes. Now I had to revise this way of life.  My writing sessions are mostly early evening, combined with uploading my many photos, but we do everything for our health I suppose.

Click here for more
Posted by Pat Gerber-Relf at 19:40

Labels: daily prompt, I want to know what love is, Walking