Here’s the title of your post: “An Offer I Couldn’t Refuse.”
Set a timer for ten minutes, and write it. Go! 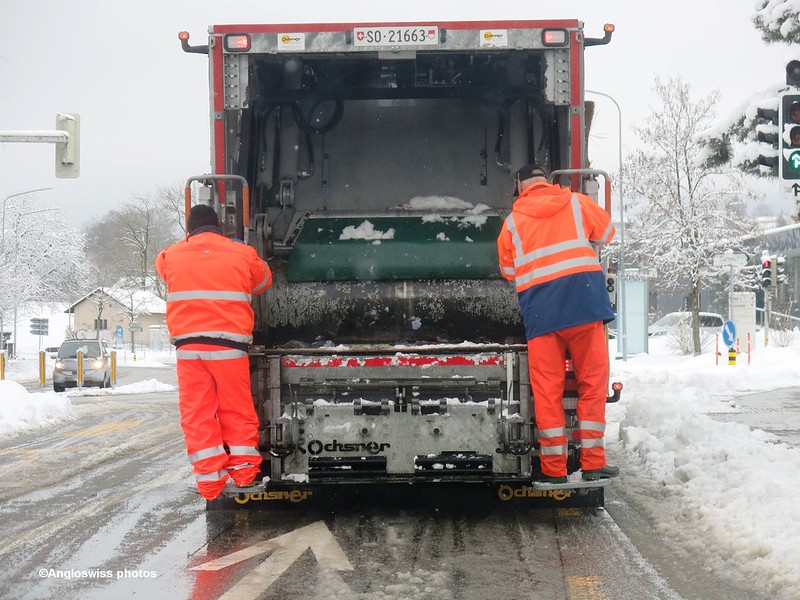 The State collect my garbage once a week, usually on Friday, unless a holiday is in the way. It is not really an offer. I have to pay for it. Our garbage men have to have a nice garbage crunching machine on wheels to kill all the plastic bags containing the refuse, such as food remainders and dead prompts (see yesterday’s daily prompt). It all has its price, and we pay about $1 for a plastic bag. Mr. Swiss and I have a sly system to save bags and money. But I thought it would be nice to show the men that sacrifice their lives daily to collect the garbage. They are now immortalised on my blog.

So this has nothing to do with “An Offer I couldn’t Refuse” because this process is not an offer, but a vital necessity, otherwise we would be an open house for all sorts of strange creatures and smells.

Of course WordPress brought this old new prompt entirely for my benefit. First of all because it is new to me and I have never seen it before and secondly because today is 4th February. I am sure they noted in their online records that 46 years ago I said “Ja”  (Yes) in a small registry office in our local country town of Solothurn in Switzerland after being asked by the late Mr. Beda Baumgartner, who was the marriage registrar. It was not really a matter of an offer I couldn’t refuse, as marriage is not an offer, it just happens, especially if you get a Swiss passport into the bargain. I had visions of gold reserves, cheese fondue, Swiss chocolate and of course Mr. Swiss was also part of the bargain. You do not look a gift horse in the mouth, you accept.

I was a mere 22 years old at the time and my life was before me. I was tired of renewing my work permit and registering at the British Embassy annually, so I decided to simplify matters and became Swiss. Ok, not that you all think I am a cold calculating person. On the day I began my new job I saw him at his desk and walked past. I do not think he noticed me, just a new english girl in the office. It was when the dictation of a simple letter took an hour instead of the normal five minutes, that suspicions spread. This all happened in April and on February 4th 1969 I stood in front of the late Beda Baumgartner and said “Ja” after being prodded in the ribs. My german was not so good at that time and the ceremony was completely in German, so it was a sign that I should say something and I decided that “Ja” was the best choice. If I had said “Nein” the resulting conversation and excitement would have been too complicated in German. Mr. Baumgartner was wearing his registry office dark suit with pin stripes and we were wearing - sorry I can’t remember.

Time is running out, you cannot squeeze the turning point of your life into 10 minutes which has actually now been 46 years. We never got around to doing a church wedding and we also only had two witnesses present at the big occasion, a married couple we knew. Afterwards we had lunch at my mother-in-law’s place. We had light snow on the day and I remember before we said our “Ja” stuff and I got my Swiss nationality in the registry office, we had a drink in an old restaurant next door to the registry office. The restaurant still exists, but since it has new management and is now a shicky micky place with exclusive meals and all the trimmings.

And as the golden sun sinks slowly in Switzerland I am sure it was a good offer and I am still Swiss (and British).

Click here for more
Posted by Pat Gerber-Relf at 16:14