WordPress Daily Prompt: Once Upon a Time - Forgetfulness


Once upon a time I was resting in my normal golden oldie sleep after lunch and sometimes things go through your head. I was actually back in the land of living but decided to spend a few minutes, (15) in bed surfing on my iPad hoping for a daily prompt, which did not arrive and then a thought struck me. The evening meal would be a pizza. Not just any old pizza but one of my pizzas, the one I make myself (I buy the pastry). If you make a pizza you need cheese. My pizza has a layer of grated Greyerz cheese at the base and is topped up with Mozzarella cheese, you know that white one that swims in a milk liquid to be placed on the top of the pizza and yes, I (we) had forgotten the cheese. I did not want to go shopping, so I would have had something in the fridge, but not the real McCoy. My hero Mr. Swiss volunteered to take a five minute car journey to the local supermarket and buy the necessary.

He left and I was seated in the kitchen with my other computer partaking in a weekly photo blog, Picture This, hosted by an online colleague in Blogger. I was astonished to see that it was snowing with mega flakes outside so I took a photo. 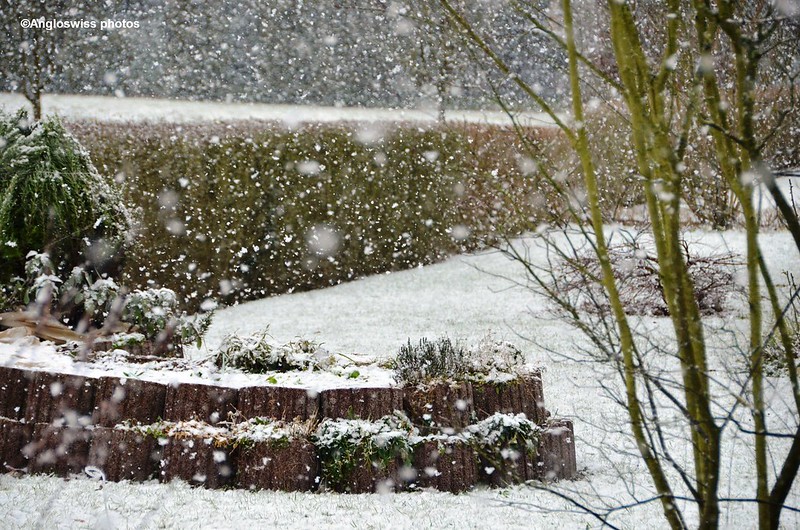 “Oh dear” I thought, poor Mr. Swiss battling his way through a blizzard to buy the pizza cheese. I immediately had a guilty conscience although I remember the last words of Mr. Swiss before he left “no problem, forgetfulness comes with old age”. How true but I forgot and he is older then me. Eventually he returned armed with a plastic bag containing the missing cheese.

He said that as he drove off it started to snow which was not so bad as they were large flakes that melted as they hit the road surface. However, he was surprised to see so many people in the supermarket and had to fight his way through the crowds for the cheese. I told him I should have done the necessary, but he found it would not come into the question. He had to battle for a free car parking space and that would have presented problems for me. OK, he was right. I am not good at fighting for parking spaces. I prefer two spaces together, as it is easier to park and today there were only single parking spaces in complicated places.

There is a happy end to all stories. I began preparing the pizza as Mr. Swiss had bought a set of videos from an American television series “Fargo” which we wanted to watch afterwards. My style pizza is basically quattro stagioni, although sometimes there might not only be four seasons, but a few more added. I am not giving instructions how to make a perfect pizza. It might not be perfect for you, but it is our pizza. Of course I have a photo, presenting pizza al  Angloswiss.

Click here for more
Posted by Pat Gerber-Relf at 19:58