Have you ever made a New Year’s Resolution that you kept?

I do not make New Year’s Resolutions because I am too lazy to keep them. If I want to do something I do it and need no resolution to guide me. I thought about resolving not to do the daily prompt, but I am doing it in any case, so it was a good thing that I did not resolve anything in that line of things. I would have broken my first resolution of the year if I had actually made the resolution not to do the daily prompt.

I was going to resolve not to smoke, but I am a rescued smoker since at least twenty years, so that is another resolution that I could not keep this year because I already did it without resolving to do it at the beginning of the year. 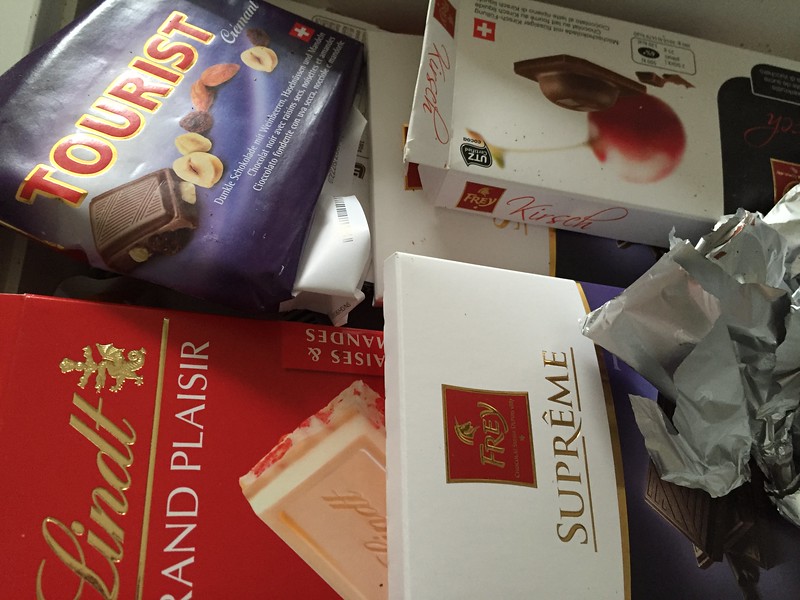 There is always the chocolate/sugar problem of course. I never bothered to resolve anything to do with this because it would then become a problem and up to now it is not a problem, although I am a diabetic on tablets. At least my sugar levels are still more or less organised. Sometimes they go up, they might remain and even go down. Going down is also not so good, known as hypoglycernia, but no problem, just grab a bar of chocolate, eat a few squares (we have enough in the fridge - see photo) and all problems are solved. Your sugar goes back to how it was before you avoided eating it, so why make a resolution about not eating sweet stuff, just a waste of time.

I was going to resolve taking more walks in the fresh air, but sometimes it rains, it might snow and it might be a heat wave, so there is absolutely no point in resolving anything in that connection. The weather does what it wants and so do I. I could resolve to always take my camera with me, but that would be a waste of a resolution as I always have it with me most of the time. I have even now bought one of those arm bands with a place for my iPhone meaning I can take my iPhone with me if I do not have a pocket in my trousers or a handbag. I am always available, online, connected with the cyberworld.

Actually when I think of it, resolutions are a waste of time and spoil the enjoyments of life. I could resolve not to be so much on the computer and then I would have more time for other things. I decided this would not be a good idea and as my computers would become victims of neglect. Neglected computers are not happy computers, they feel unwanted and it is always a good idea to keep in touch with them and what else can a veteran daily prompter do all day, computers are part of golden oldie cyber life.

I was thinking of resolving to do more housework, being a domesticated human, but that happens automatically. My vacuum cleaner and washing machine are part of my life when I am not online.