Your local electronics store has just started selling time machines, anywhere doors, and invisibility helmets. You can only afford one. Which of these do you buy, and why?

On 21st May 2014 (Pick Your Gadget 21.05.2014) I had a discussion with Mr. Swiss in the local electronic store about a method to ensure my disappearance. I decided I will stay where I am and do not need magical things. In the meanwhile it seems that Mr. Swiss had second thoughts and was waiting patiently until this prompt arrived again. How did he know that it would arrive again, of course he knew, they all arrive again. So I awoke in the morning to find a large door with a cloud design in the kitchen. It was tied around with a big blue bow and a label saying “with love - have fun”. This time I could not resist and decided to take the chance. I was worried if I did not, this prompt would be dished up again in a year.

I untied the bow and opened the door. 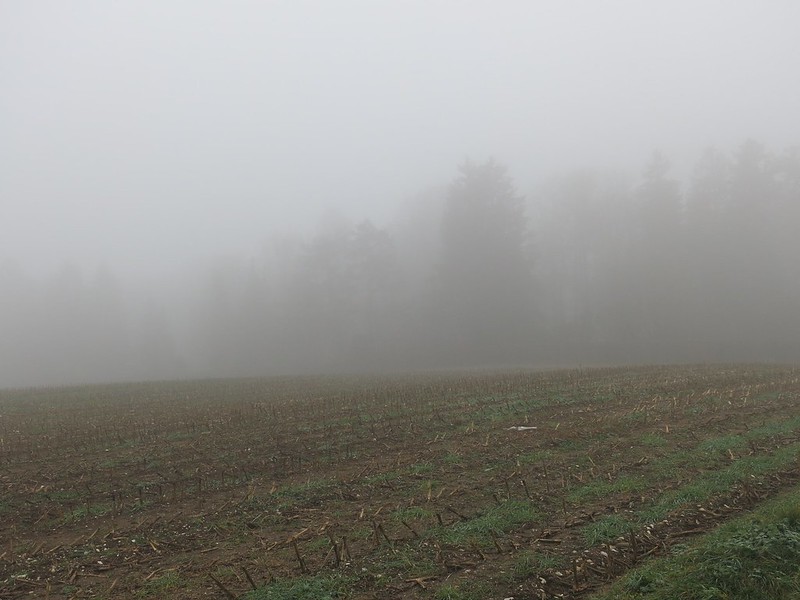 I had probably forgotten to clean my glasses, but no, this was the real thing, I was in a misty place and could only see outlines. Of course, my curiosity was aroused, there is nothing like groping your way through a thick fog after opening a door. It was a silent mist, all noises were suppressed. I decided to move on, perhaps I might find some light. 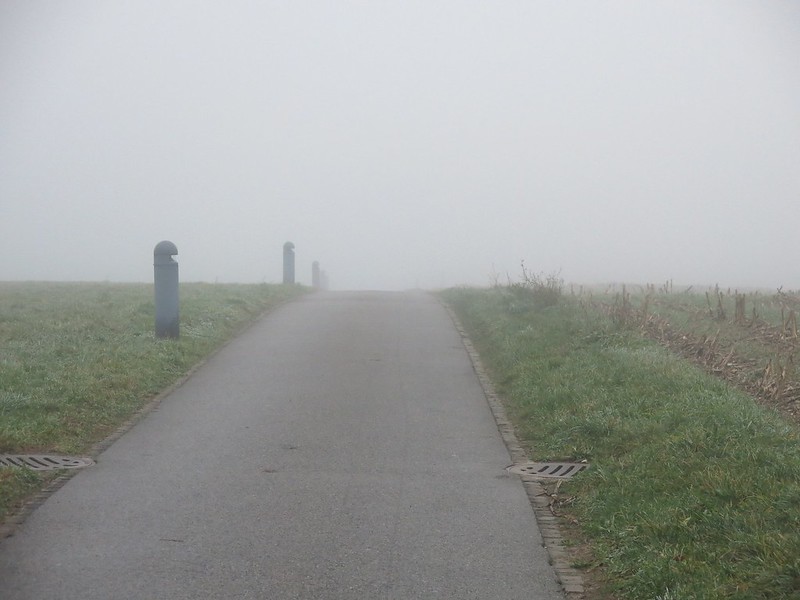 I could see the outlines of a path. Paths always lead somewhere, so what could possibly go wrong. I was sure that eventually the sun would shine, although perhaps I was in a place where sun did not shine.I decided never trust doors especially if they are bought in the local electronics store. That guy who worked there was always a suspicious type. I did not like the way he laughed and smiled when he saw you, his two overlarge pointed corner teeth protruding over the bottom lip and I have a distinct dislike against people with red eyes.

“Hello” I called but there was no answer. I was the only living person in this place and then I saw a figure looming out of the mist: a very tall figure. 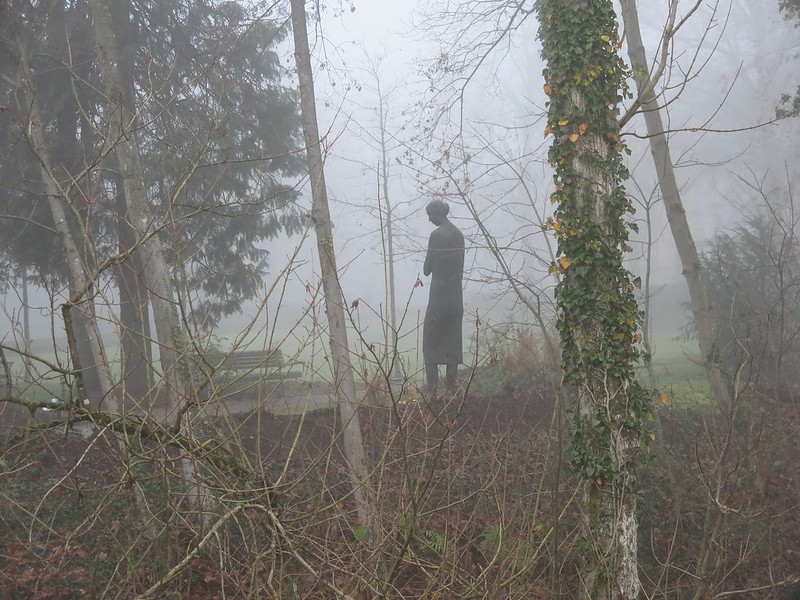 I was sure it was a women, although it could have been a man dressed as a woman. She had her back to me and was staring at an empty bench. I was now exhausted from my walk in the mist and my hair had begun to curl, due to the dampness of the air. I had never had curls, so always look on the positive side of things. It would have cost a fortune at my local hairdresser to have a perm, and now I was getting it for nothing. Perhaps it was all part of the wonderful surprise door.

I am drifting. I was tired and so moved towards the bench.

“Hello lady, do you mind if I sit here?”

She did not turn around to see me and there was no answer, she was still staring at the bench.

I heard a creaking sound. It reminded me of my joints in the morning when I arise. The figure was turning in my direction. I was glad as it was not my joints, but the joints belonging to the figure. She pointed towards the bench and made a strange laugh. I could then see her face, so I decided I would not sit on the bench. Ladies that have eyes with no colour, just a white disc, were not my idea of something human, and I did not like her teeth. They were very pointed. She pointed in my direction and took a step. She pushed me onto the bench.

“Ok, lady, you could have said take a seat.”

This lady was not talking, she was a person of actions. It was  she opened her mouth and approached my arm. I decided to go. i ran as fast as I could, shouting for help and saw my rescue. There was an ambulance parked and it seemed to be waiting. All its lights were switched on, as far as I could see in the mist. 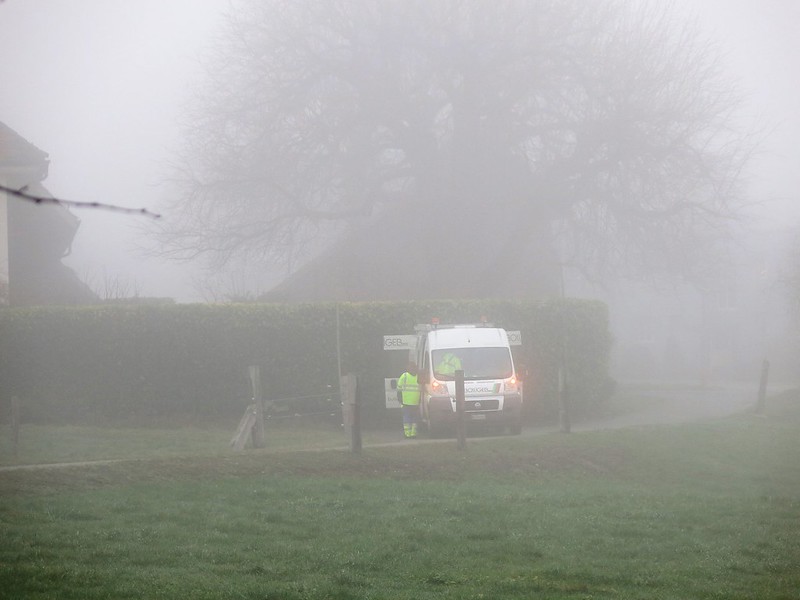 “Look Joe, another one.”

“Yes Fred, looks like that that guy at the electronics store was having a good day with the turnover yesterday.”

“I think those doors were selling like hot cakes. They were half price. Amazing the people that believe they are getting a bargain, just  because it was cheap.”

“I just feel sorry for the ones that didn’t make it. They are either still searching for some light in the fog, or that statue got them.”

“Yea, too bad. You mean the statue that lives every time someone asks if they can sit on the bench.”

I was rescued, although Joe and Fred seemed a strange couple, they both had six fingers on each hand, or perhaps I was seeing double. They even had three sixes on their jackets, must be some sort of rescue team.

“OK Mrs.” Joe asked, “just take it easy, we will bring you to safety. Luckily your Mr. Swiss paid extra for the return journey.”

“You mean he knew all about this.”

It was only when I saw some light that I felt safe, although the light seemed to have risen up from the ground suddently, like an elevator. 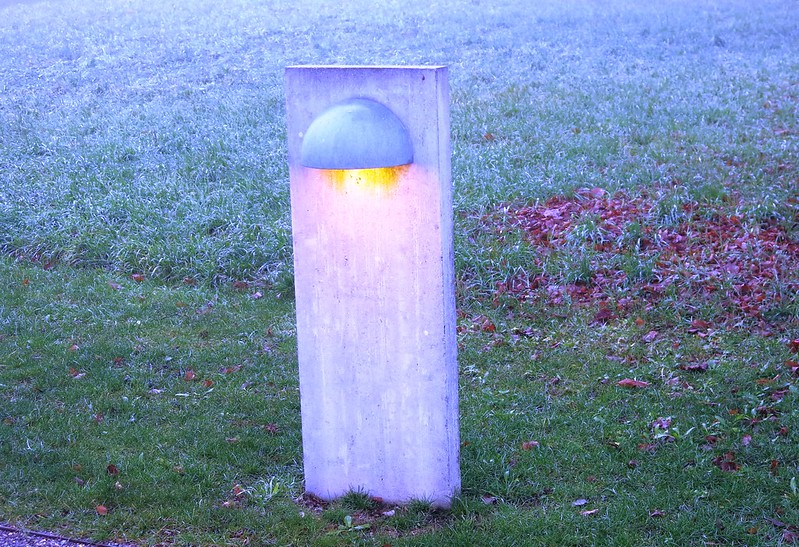