What’s the one guilty pleasure you have that’s so good, you no longer feel guilty about it? 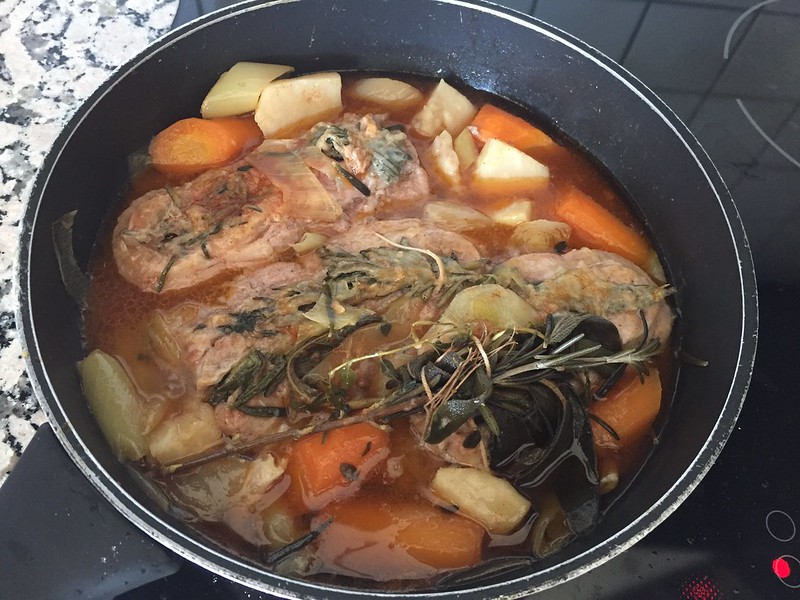 Me guilty, no, that is a thing of the past - at leat on 14th May 2014 I scrambled a few thoughts together to tell everyone my secrets. Since some months have past, so time to take a review on the situation. It seems that at that time eating was a guilty pleasure, like eating for the fun of it and not to survive. Things have changed, I still enjoy eating, but do not feel guilty, why should I? This was Sunday dinner. Admittedly I don’t cook for just I, me and myself, but have a family to feed. However, if you cook, why not make the most of it and so I do. Simmering slices of veal with the accompanying vegetable is a pleasure. Eating ice cream with whipped cream is a delight and looking forward to munching a cake after a golden oldie sleep if a privilege. You cannot take it with you, so enjoy if you still can.

There was a doctor that analysed my blood and discovered by chance that it seemed to have more sweetness than it should. It all began with a coincidence. “We have a do a sugar test”, so I told him to go ahead. His guilty pleasure was fulfilled when he discovered that my blood had more sugar than it should. He did not care about my guilty pleasures. At the beginning it was not exactly a shock, but having visions of going on the needle and having black forest cake cancelled from my pleasures (which were not guilty) was just an annoyance. Today, 20 years later I find it a challenge to enjoy the pleasure of a sugary environment and discovered that I still feel fit afterwards. At the age of 69 the guilty pleasures have become just pleasures. I get daring to the extent that the dish of veal was accompanied by a generous portion of noodles. I mean you might as well be hung for a sheep as a lamb, although this was calf meat.

So I do not have one guilty pleasure, that would be silly. My life is just one big guilty pleasure. I remember my mum’s famous words when the tobacco price in England was raised again. She was a smoker, my dad was a smoker and yes, as a teenager I was a smoker. It was the days when it was not a dangerous pastime, just something everyone did. So mum said “what pleasures does an old boy have when he can’t smoke a cigartte.” Looking back on these motherly wise words, it seems that she got something wrong somewhere, or was she telling me that she did not feel guilty about smoking her packet of cigarettes every day. One day she gave up, not because of guilt, but mainly because of the money.

Today there is not much left for a golden oldie to enjoy. I don’t smoke (can’t afford it), do not drink (don’t enjoy it), but I have my little pleasures, not combined with guilt. My first movement in the morning, before arising from my sleep is to reach out for my iPhone on my bedside table: more practical than a lamp. It lights the way when it is dark and supplies information. First of all I connect it to the wifi and then the daily thrill of being there begins. It makes a noise to tell me that people all over the world have sent me e-mails. I say hello to Facebook and realise that my problems are small compared with the problems of the others. People I do not know personally, will never know personally and probably to not want to know personally, but they tell my all about their guilty pleasures. I then spend some time in WordPress and so the day begins. I am online, I am there. This is my golden thread throughout the day, without a computer I am lost. How did I manage before Bill Gates or Steve Jobs appeared on the horizon. We had guilty pleasures but could not tell everyone all about them.

And now I will  leave you, after all there is more to life than a daily prompt, computer and a piece of cake. Ah yes, I have a few photos to take.