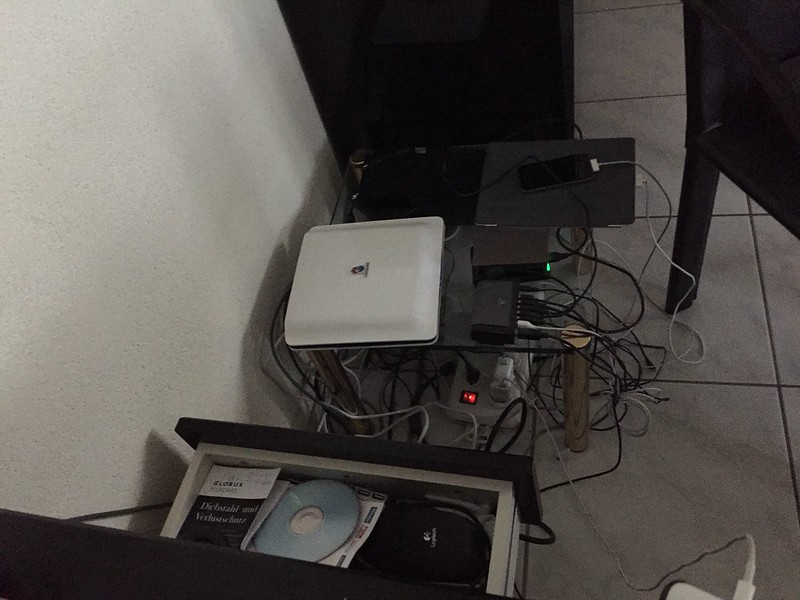 When I saw these two words on the Topic Generator I was going to give it a miss. However, circumstances have changed my opinion (as well as a silly churned up old daily prompt). At home we have a small private storm which could be reworded as stormy private. Yes our super fantastic technically advanced computer provider has decided too change things. It is not broken, and it does not need any sort of revision, no, so I ask why mend it and even replace it. As you can see from the photo it is very neat and compact, in spite of the many hanging cables on the floor.

It all began with an SMS (you know one of those telephone message thingies) from the provider to tell us that their established system will be renewed with IDP. I discovered that IDP is Internet Datagram Protocol meaning that all our modem and cable connections will now be made via Internet. It seems the telephone is already there. Before I continue, I am far from being an expert on these things, that is the world of Mr. Swiss, although he is also not Bill Gates but he seems to know what is actually going on and some of my explanations here might not be as correct as they should be. We called our provider and asked them all about it. It seems that they also wanted to include our television in this new and wonderful system, but Mr. Swiss found that if the Internet would break down, as it has from time to time in the past, we would be left without our TV connection. I mean they do not have to jeopardise everything now do they. So the television remains were it is (to be quite honest I do not really know where it is, but it works).

The young lady on the phone said that she could take that part out of the package (yes it is a package) with no problem and so we forgot about it all and decided to wait and see what happens. Today in the post we received a real package, one you could unpack and examine.

“What is that” asked, no exclaimed, Mr. Swiss.

“Looks like something electronic” was my answer. “Perhaps it has something to do with that new and wonderful telecommunications experience.”

Mr. Swiss opened the box of Pandora and what did he find. Cables and switches Yes, our provider were efficient and quick, but complicated. A “how to do it” plan was included to show how you can set up your connections. After closer examination Mr. Swiss realised that the cable was not long enough to attach the modem to whatever it was supposed to be attached to. A further telephone call was made for an explanation.

“When will the new system be activated?” he asked.

“Tomorrow morning” was the answer.

It was then that I applied some profanities in the background, with visions of being Internetless for a few days. Mr. Swiss sort of signaled to stay cool as it seemed that the gentleman on the phone could probably hear my various exclamations. It was then that Mr. Swiss did lose the cool and calm state of mind and asked if they were perhaps overdoing it. The gentleman explained that we had received their e-mail and agreed to the installation. Mr. Swiss informed them that we never received an e-mail and that it was all done by SMS and as far as he was concerned an agreement did not exist. It seemed to be an assumption on their side, a false interpretation of the state of affairs. I was still trying to remain calm and collected in the background.

“We do not want you to covert tomorrow. The cable you sent is too short in any case. When is the deadline for this new IDP system?” he asked

The result was that Mr. Swiss, with my verbal support in the background still being rather excited, told them what to do with their new system in a civilised way, thinking probably uncivilised, and so this afternoon Mr. Swiss made an excursion to the post office and returned the new unused toys.

I would add he also called in at the rival company and made arrangements for our Internet to run on their system from November. This other company is cheaper and has a very good reputation. Above all I was in the  village first aid group with the wife of the big boss, so what could be better.

I now rest my case and hope that Part 2 does not follow and the gentleman on the phone remembered to tell the workers no to change our system tomorrow. If you hear nothing from me tomorrow you will know why.