When was the last time you were ready to throw in the proverbial towel? Did you end up letting go, or decided to fight on anyway? 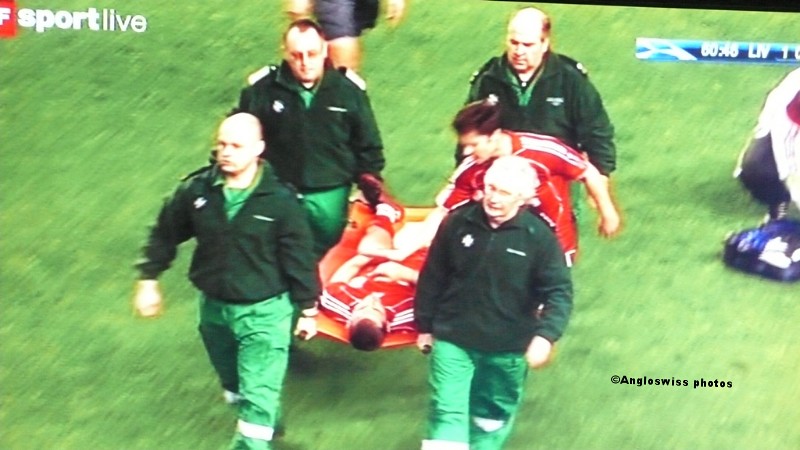 On 22nd April 2008 the english soccer team Liverpool played Chelsea in some sort of cup match. It was so long ago I cannot remember the importance of the game but if I was sitting in front of the TV taking photos so it must have been something big. As you can see this player was forced to throw in the towel due to some sort of strange injury. He had no choice and there are times in daily life when you also have no choice.

I began to write this prompt and decided who wants to read about the times when I was forced to throw the towel away, only to regain it afterwards. I just put it in the washing machine and continued. However the towel begins to fray at the edges and it might tear. What do you do? You buy another towel: perhaps a red towel so that the blood stains do not show, or even a brown towel to hide the rust when you use it.

I know the first thing that comes to my mind at the moment are the daily prompt ailments which prevent us from writing a daily prompt. Of course we can do our own thing. I did my own thing yesterday because during the European day there was no daily prompt. It only arrived in the American hemisphere at a normal time. I did not throw in the towel, and this morning I could even put the towel in the washing machine to adapt to the prompt that never was yesterday European time.

I know most of the daily prompt victims and they know me. I think I am a normal person, do not commit murders or rob banks and enjoy a small polite discussion at the end of the prompt. All the more I was astonished to discover that yesterday I was more or less told I lament and there is a solution to my daily prompt problems. I was really only astonished. Many adjectives have been applied to me, but never that I lament, this having the meaning of being a passionate expression of grief and sorrow. I then wiped my tears of frustration from the keyboard, put away my Kalashnikov and wrote an answer. It seems my answer was read and the whole towel throwing fight was dropped. Comments on both sides were deleted and we remained civil. This is the way to go.

Which way are you going daily prompt?

“Did you call Mrs. Angloswiss?”

“Oh, hello Wordy, I though you might turn up.”

“Of course, it is Sunday, chocolate cake baking day.”

“No Wordy, today is towel throwing day. Do you throw towels Wordy?”

“Of course not Mrs. Angloswiss, I do not need towels, just a shine up on my metal parts and rust remover and then everything is fine.”

“No Wordy, everything is not fine. The Daily Prompt was at least 8 hours late yesterday and I went to bed without seeing it. This morning it was there and thanks to a few spare minutes I managed to adapt my prompt and write one for my feline friends.”

“Then everything is OK Mrs. Angloswiss?”

“No, Wordy, it is not OK. I am fed up with this Russian Roulette you are playing with the daily prompts. Sometimes you pull the grid trigger and you have a result. Other times the grid trigger does not work or shoots past the target. What is going on?”

“Well, it’s like this Mrs. Angloswiss. Oh, can I have another piece of chocolate cake, the bit with the chocolate flakes on top.?”

“Wordy, you are changing the subject. Tell me about the daily prompts.”

“I suppose you can compare it to a chocolate cake. Sometimes they are perfect, prize winning in taste and consistency and other times they get burnt on top, or might be a little dry because the mixture had too much flour and not enough butter. You know what I mean. Daily Prompts are like that. Some days they arrive and others they give up on the way.”

“Wordy is that your explanation?”

“Stop lamenting Mrs. Angloswiss and put that Kalashnikov down. My metal plating is not bullet proof.”

Again Wordy and I have an undecided issue to solve. Come back for more on a day when the daily prompt is working. There is a linen basket for depositing your discarded towels as you leave.

Click here for more
Posted by Pat Gerber-Relf at 16:24