What person whom you don’t know very well in real life — it could be a blogger whose writing you enjoy, a friend you just recently made, etc. — would you like to have over for a long chat in which they tell you their life story? 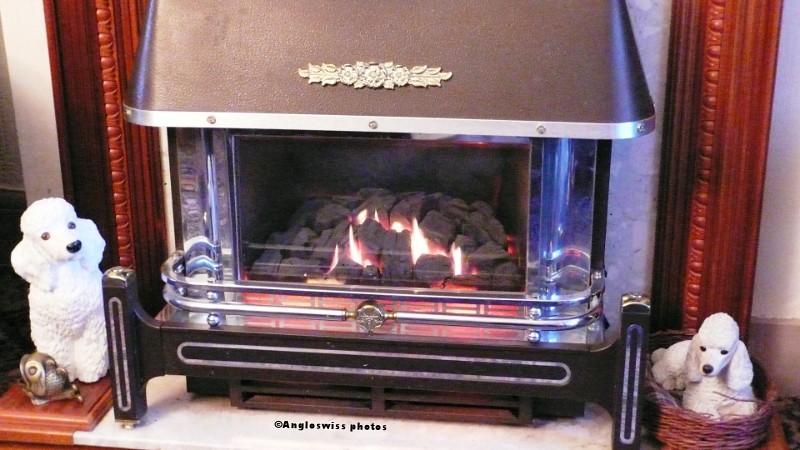 There are not many firesides left today, all being replaced by electricity and gas. This fireside is completely artificial. Although the flames flicker it is all show, just to make it homely. I do not really do long chats and listening to someone telling their life story is the most boring thing I can imagine. We bloggers tend to include details of our private life, it is an occupational hazard when blogging. If I ever have the opportunity to meet them, I would not waste time listening to their life’s history and they would probably tell me to read all about it on their blog. After all the main motto of our blogging site seems to be “tell us all about it”.

Of course there are a few that I would like to have a conversation with, but most are dead. I would start with Giuseppe Garibaldi - Who? Yes that is exactly what I thought when I discovered that many pubs in England, especially places on the coast, were called The Garibaldi. Apparently he made a big impact when he paid a visit to London in the 19th century. The streets were lined with people wanting to see this hero. He also managed to cross the pond and visit an english colony over there. He was not a bad looker and he probably thought they would offer him a part in a film: “How I won the battle of Palermo” but it seemed that was not the case and it was Lucky Luciano that got all the honours. I asked my family in England who this Garibaldi was, but they did not have a clue. In my later years I knew a few Italians in my workplace so asked them what they knew about Garibaldi.

“He was a freedom fighter” was the answer.

“Whose freedom, what freedom?”

Is seems the secret surrounding Garibaldi had almost been forgotten, even by the Italians. So what do you do? You go to the library and lend a few books. Better was when I was on a visit to the Swiss capital of Bern, just a half hour away from where I live by motorway. I discovered one of those dark bookshops with a random dog eared collection sitting in a bookcase outside on the pavement and lo and behold they had two books at a very good price (probably because of the dog ears and looking like something the dog brought in) which I bought. I was now equipped with my Garibaldi collection. Ok, he was an adventurer, a real dare devil. He went to war on a horse, one of his wives riding with him very much pregnant and decided to unite Sicily and all the other states in Italy to make one country. Now even the mafia could not unite Sicily, so he had to give up. Eventually he lived in a villa on the island of Sardina where he died and was buried. A friend of mine was on holiday in Sardinia and visited his villa and saw the grave. I decided he would be worth a fireside chat. Read all about it Giuseppe Garibaldi.

My next victim would be Fidel Castro, the ex boss of Cuba. I seem to have a thing for those rebels and freedom fighters. I knew nothing about Castro, so bought his autobiography. It was very interesting. I don’t know whether I would invite him for a fireside chat. I do not like cigar smoke, it would make me cough and not smell so good afterwards. Sorry Fidel, lets meet somewhere outside, perhaps in the garden.

Dracula would be a conversation worth, but I would have to meet him in the middle of the night and decorate the fireside with garlic to pacify his longing for some fresh blood. Perhaps I could hang a cross over the fireside, just to make sure that I would survive the chat. I could, of course, meet him at the hospital in the blood bank. He would definitely be happy and I would have no problems.

Talking of blood, today was the big High Noon at my docs, for Mr. Swiss and me. I got there first so could talk all about it with the doc. She had a sheet with all my values, blood, joints, cholesterol, iron, etc. etc. According to all the details I am one of the most healthy people alive. Even my blood sugar was normal, although she confirmed that was because I am taking tablets. The cholesterol levels were good..

“Does that mean that I no longer to take my daily tablet for cholesterol?”

“No, it is because you take the tablet that it is normal.”

“If everything is so good, why do I have pains in my body when I arise in the morning?”

“That is normal, it gets better when you start moving.”

I could not disagree with this, but I said look at my fingers on the left hand. She did.

“That is arthritis, mainly in the thumb and the first finger. We could operate it.”

I decided no, there would be no operation. I have never heard of anyone dying with arthritis in the thumb and one finger and besides, it looks quite interesting. One finger twice the width of the others and the thumb with a strange bump on the joint. Not everyone has such interesting fingers.


So, time to go, and be careful of those fireside chats, although I would be free on Sunday evening and next week on Wednesday evening if anyone is interested.

Click here for more
Posted by Pat Gerber-Relf at 17:13