Tell us about a time when you were left on your own, to fend for yourself in an overwhelming situation — on the job, at home, at school. What was the outcome?

69 years ago I was born. Did anyone ask me? No, I was pushed out into a noisy world, I had no choice. From the beginning I was on my own. Ok, no fending for myself, I had a bottle thrust into my mouth to give me milk because mum was not able to give me the milk I should have had. From the beginning I was neglecting, get on with it, so Ii did. I was depending on a glass receptacle with a nipple. I did all the sucking myself, I suppose it was an automatic reaction, but it worked and I survived. I did my recycling system all on my own, although I was continuously being washed and trained to avoid the mess. I had no problem with it.  It was all instinct for the lack of an explanation and so mum looked after the cleaning part.

I was sent to school, no-one asked me. I would have preferred to stay at home, eat and play but no. I was forced to go on my own to school, sit in a class with complete strangers and even play with them. I suppose playing on your own is boring. They thrust a book in front of me, gave me a pencil, later a pen and I had to write things to prove that … I don’t really know what I had to prove, but it was all in the genes I suppose so I did it.

The real problems began when I had to earn money, pay my way. This was a daily routine that I really did not want. I am sure if I had been born into wealth, like the daughter of Mark Zuckerberg, or one of Bill Gates three children, I would not have to had do this work thing, but no-one asked again, find a job, earn money and get on with it. Life goes on but I was always left to fend for myself, I did not have a special hand raised over me for protection, I just got on with it.

Getting married and having children was another thing I did, although this time I had a partner, and so we got on with it together. All part of the human biological system I suppose. I never sunk in my life, I got on with it. Of course I had a few near misses, two broken arms, a 7 hour operation but I survived. It was something like the birds I saw today fighting for their food in my  bird house. 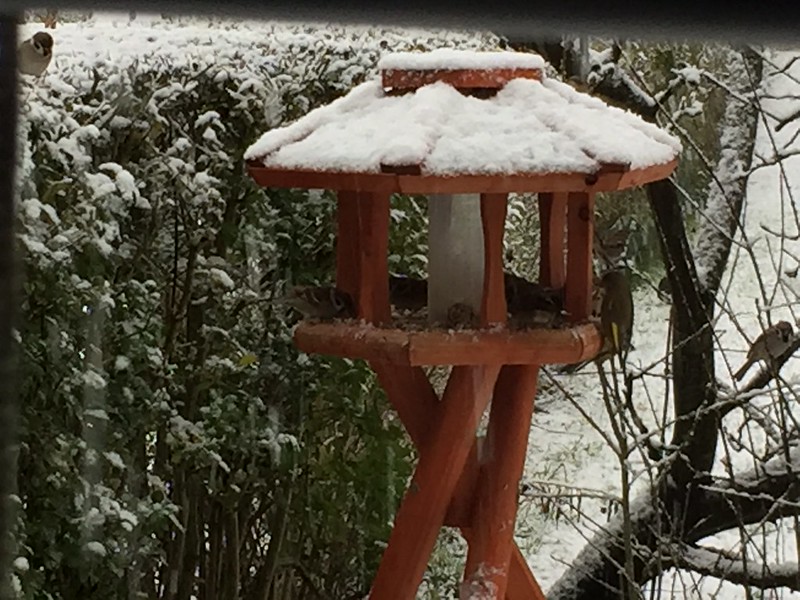 They do not ask, the sparrows take what is offered. Since the day when they were pushed out of the nest they had to fend for theirselves. Now I help them on the way in winter filling the feeder daily. I watched as one sparrow pushes the other out of the way to get to the food. Tits are more polite, they wait on the tree and fly down for a sly peck of the food, but they are on their own.

Perhaps I was one of the lucky ones, I did not sink, I just got on with it, my motto being “you have nothing lose”. And when I go to the happy hunting grounds I will do it all on my own. What a happy go lucky prompt this is turning out to be.
Posted by Pat Gerber-Relf at 16:45