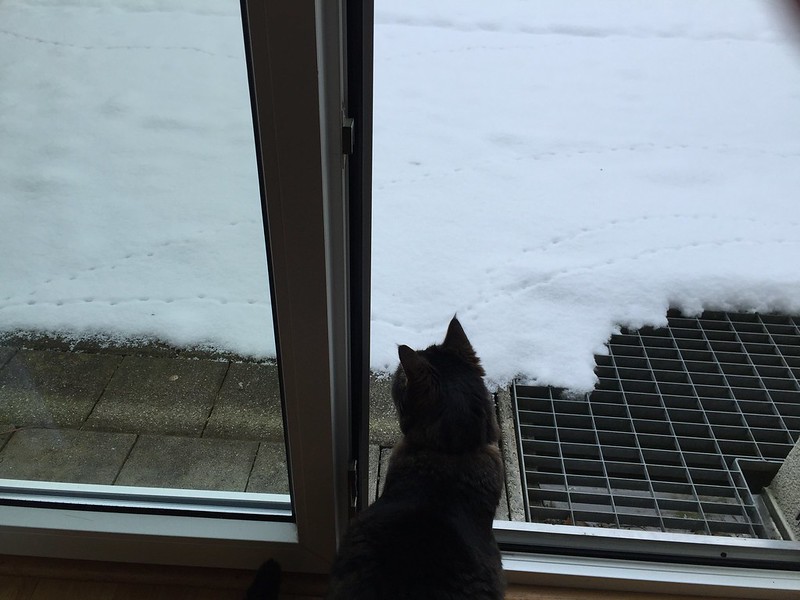 “Mrs. Human, what’s that white stuff outside in my territory?”

“It’s frozen water that comes down from the sky.”

“I thought frozen water was what is in my bowl outside in the morning. That is transparent, but that white stuff is not transparent”

“It varies according to how cold it is I suppose.”

“You suppose? You are supposed to explain everything to me, but “suppose” in a human word when the human does not know why.”

“Things are not always so easy to explain.”

“That’s is because the human brain has not yet achieved the level of the feline brain. I will have to ask Bastet the reason for the difference between snow and frozen water, she will know.”

“Believe what you want Mrs. Human, she is always here. All I have to do is to programme my whiskers and I am already on the receiving end of her wisdom.”

“I thought whiskers had another purpose.”

“Yes Mrs. Human, just think. Do not forget we felines were gods and….”

“I know Tabby. Why do you not know the difference between frozen water and snow in that case?”

“Because we felines had not yet invented snow when we were gods. That came later when the Norwegian cats appeared on the scene. My ancestors originated in the old country, where the pharaohs lived and Bastet was top of the hit parade and not some guy called Bruce Springsteen that I have never heard of. We even had a guy called Ra, the sun king who died every day, only to be reborn the next morning. Bastet was Ra’s groupie. By the way did you know it was punished with the death sentence if you touched a hair on our feline bodies?”

“No, I did not Tabby. In that case what do I get for serving a dish of tuna fish.”

“Satisfaction that you have chosen the right meal for your feline.”