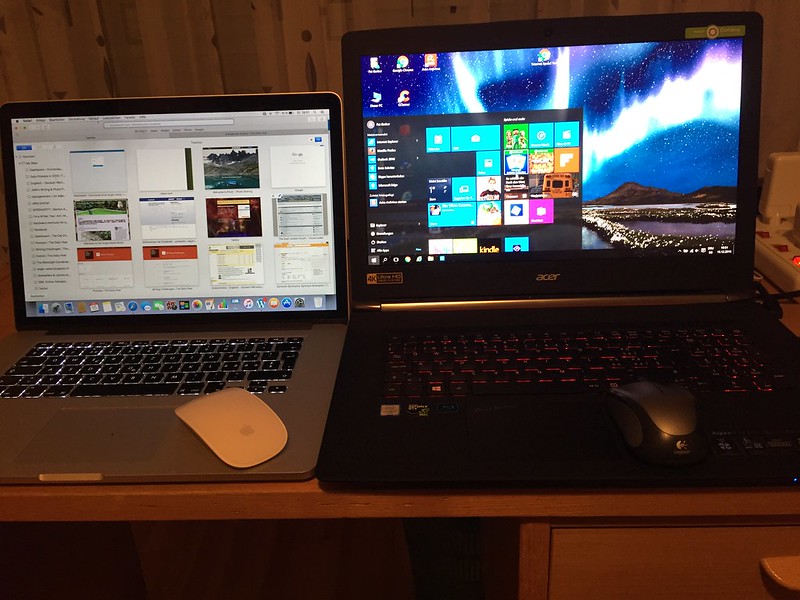 I thought I would take a photo of both of my computers to prevent jealousy from the beginning.
On the left is my Apple Macbook pro and he is still my favourite. Always ready at once, no waiting and never hanging on the electricity whilst working on it. I have about 10 hours time which means I only upload it in the evening for about 30 minutes according to how much I have used it.

It was then that Bill Gates and his merry men decided to introduced Windows 10 which no-one really loves, at least not as an upgrade on their computer as it slows down everything. However, I decided that a Window 10 computer would be a handy thing to have and so I went on a safari on the various web sites. I landed again by Acer but this time decided to go the whole enchilada and chose an Acer Aspire Nitro VN7-792G Black Edition (17.30", UHD, Intel Core i7-6700HQ, 32GB, Win 10) if those specifications mean anything to anyone.

I am pleased with my new computer and am now learning the ropes. I can either use the brick system or the old Windows 7 system and Mr. Computerman organised both for me, so I can choose and hop from one to another. It is a nice quick computer, no waiting time for it to start and has wonderful red lights behind the keyboard. Mr. Swiss found that red is not the ideal colour for the eyes, but I do not even notice it and I do have red eyes now and again, so it does not really notice. It was quite a painless process to get it going and at the moment am having fun.

Admittedly it was not a cheap computer, but who cares, I do not change them every year, at least not normally. I am trying things out at the moment. Mr. Computerman organised my Chrome as browser as I did not want this new Edge thing. My WordPress app is also already there. I have also uploaded couple of photos and began to organise my various files which needs some getting used to, but being a cyber golden oldie I am finding my way.

I have now put my new computer to bed for the night. Mr. Swiss organised a nice place for him, next to his grandfather Acer and they are now resting.
Posted by Pat Gerber-Relf at 20:33