Daily Promt: If I Ruled the World

You’ve been given the superpower to change one law of nature. How do you use it?

I do rule the world, at least my world, so what’s new. I change the laws of nature every day to suit myself. At the age of 69 either you can do it or are still learning how to do it.

Last week was an exception to the rule, my rule of course, because I usually make the rules here, although sometimes there might be a democratic discussion. Talking of democratic discussions it was all about democracy last Wednesday. I remember it being Wednesday because that is the day when I go shopping in the morning with Mr. Swiss, but as said we changed one of the laws of our nature.

The change was happening already at 7.30 a.m. in the early morning hours when I was preparing my bowel of breakfast cereal and and cup of tea. 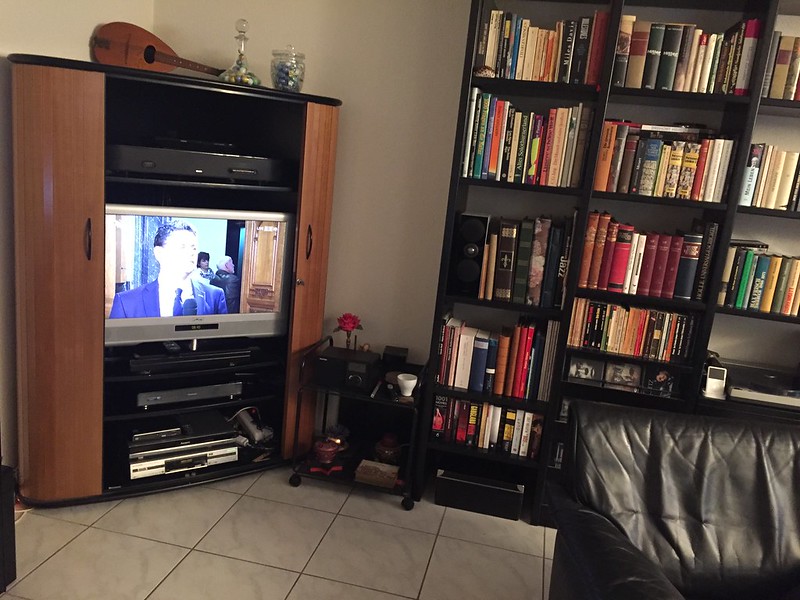 This is the television corner of our living room. Generally there is no television to be seen, it is hidden behind two parallel wooden panelled doors, because early in the morning is not the time to watch television, but here was case No. 1 of changing the law of nature. It was 9th Decembr, 2015, the day defined to be the day of electing the Swiss parliament for 2016 and so all good loyal Swiss citizens, especially Mr. Swiss, want to be in the front row when it happens.

To explain: we have 7 ministers (and an extra one called chancellor who does all the organising) and they keep their jobs if the members of parliament give them enough votes, which they generally do - so no big excitement. The ministers are in a good steady job. Now and again one of them might lose his job through insufficient support, but this is more the exception than the rule, so they have a good job. One of these 7 ministers is elected as the boss for a year, called President. This changes every year, otherwise it would be boring to have the same person, part of the Swiss democracy. Sometimes it might even be a woman, this being allowed since 1971.

Of course if we sit in front of the TV so early in the morning there must be a reason. Yes - one of the ministers had resigned and there would be a new minister amongst the seven and Mr. Swiss naturally wanted to ensure that the right candidate was elected. I had finished my breakfast and had begun to hoover the apartment in the meanwhile, being careful not to let the machine run when an important matter was being decided in the Swiss parliament.

I was quite astonished to see how well dressed and perfect our government looked so early in the morning. One after the other the various ministers were confirmed in their job, this part of the deal being settled by about 11.00 a.m.. Now we were arriving at the exciting part. In the meanwhile, while the various votes were being counted for the ministers, Mr. Swiss and I had squeezed in a shower and were dressed for the occasion. As my shopping for food had been postponed until the afternoon I occupied myself with doing a weekly clean of the kitchen. I could see the TV from the door, so was not missing anything. We had now arrived at the final stages, the new member of parliament would be elected.

This is not so easy in a country that seeks 4 languages. We had a choice of a person from the Italian part of Switzerland, the French speaking area and the German part. The romansch speaking people, who are in the minority in any case, did not have a candidate. This was not so bad, because the person who had now left the government was one of these. At the beginning of the proceedings she gave her farewell speech in all four languages, although the romansch part was not understood by many.

And now things became exciting. They had three rounds of voting amongst the members of parliament before the decision was reached. Yes, it was the french speaking member and now probably free drinks were ensured for all future parliamentary meetings as he also happened to be a wine grower.

In the meanwhile the apartment had been cleaned, lunch was being cooked and we could all relax and turn the TV off. Life in the Angloswiss household returned to normal and the Swiss parliament all retired to the various restaurants in Bern for food and drink. Normal service was resumed.

Labels: daily prompt, If I ruled the world, parliament, Switzerland