The idea that the weather and people’s moods are connected is quite old. Do you agree? If yes, how does the weather affect your mood?

As far as this subject is concerned, I said almost everything to be said the last time ion 31st May 2014 and as I am not a person of few words, I said so much that I cannot be bothered to repeat it all but here you can read it all again: Climate Control - the first time

Since writing my last memorable piece of literature things have not really changed. Mr. Swiss is still weather prone, his aches and pains developing according to the direction the wind is blowing and he is also now older, and so are the aches and pains. He still has not been engaged by the Swiss meteorological central office, but probably due to age and definitely not due to his knowledge about how the weather is, or should, develop. 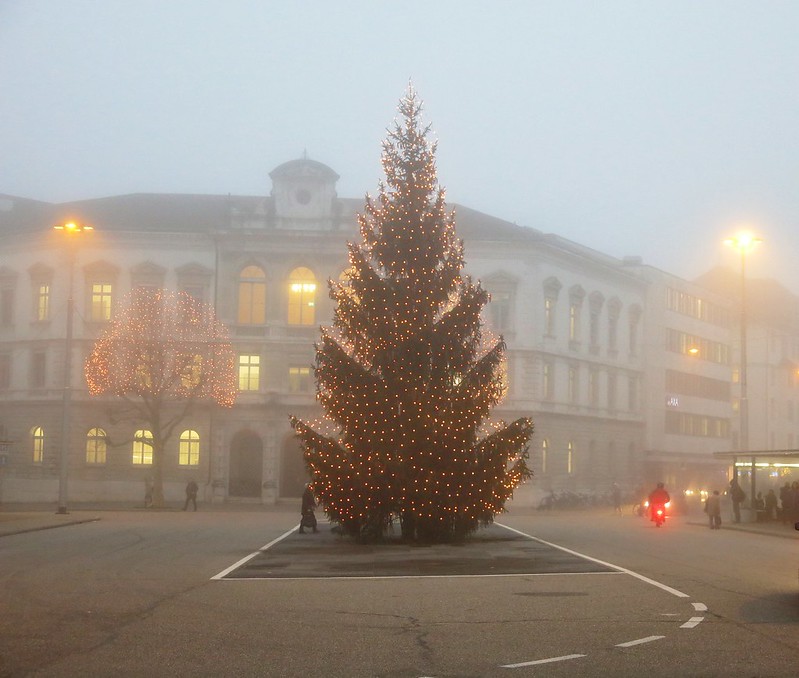 And so we both ventured into town this afternoon. I had an appointment at the hairdressers and Mr. Swiss had an appointment at the supermarket to buy the bird food I had forgotten in the morning. As you can see from the photo, we have Chinese weather conditions at the moment, although I heard today in the news that due to a wind blowing in China vision has improved and you can now see the other side of the street. It seems that this wind had changed its direction towards Switzerland, hitting the town of Solothurn, although our area is subject to heavy mists probably due to the River Aar. We drove through this low visibility until we reached our destination. It was then that Mr. Swiss realised he had never used the fog lamps on our car and realised that he did not actually know where they were.

There was a problem parking the car in Solothurn, due to the Christmas market, but Mr. Swiss pushed me out of the car and drove on to the supermarket. I made my way to Heidi, my hairdresser, where she was still putting finishing touches to her Christmas tree in her saloon. Heidi had a naked Christmas tree and is telling her customers to bring a Christmas tree decoration when they arrive for their appointment. I thought that was a good idea and slowly the tree is showing its various ornaments. Here we have Heidi adding to the tree. 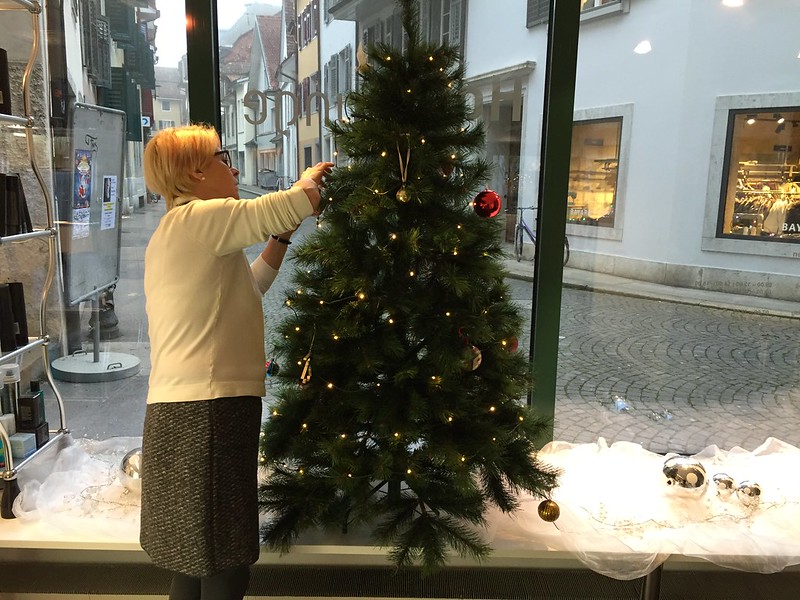 Mr. Swiss had still not arrived when Heidi was finished with my haircut, so armed with my iPhone and camera I decided to see how the Christmas market was developing in the misty day. There were many visitors, it seemed to be the event of the week, although I was only there for the photos. 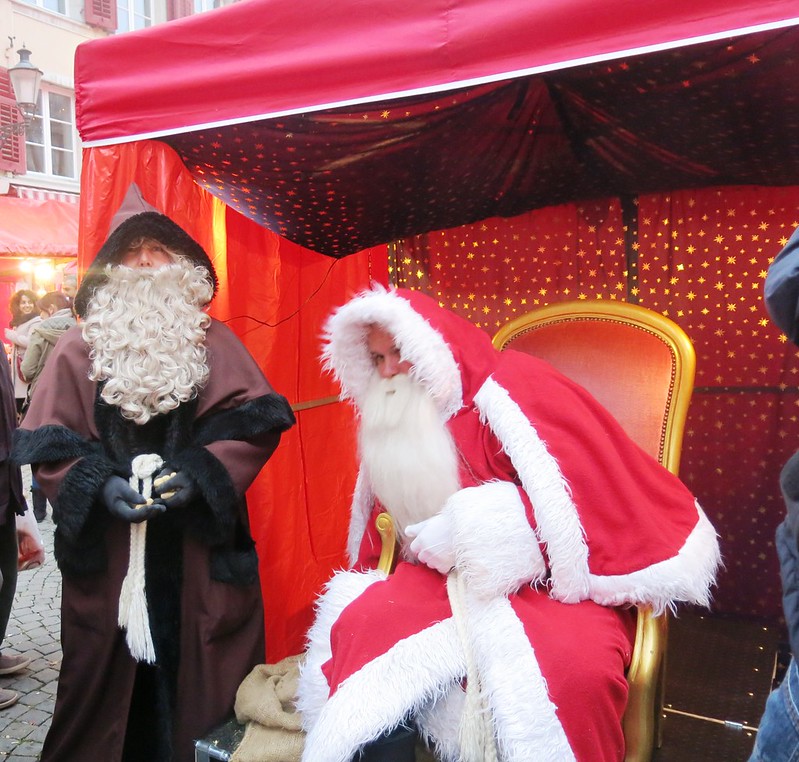 I managed to get a shot of these two guys, known as “Schmutzli” and “Sämi Chlaus” in our country. They were having a 10 second break before the next customer arrived to express her/his Christmas wishes. I felt sorry for them. There must have been at least 20 children dutifully waiting in a line with their mothers to ensure that they received the presents they wanted at Christmas. I had a flashback to my childhood when my mum took me to see Santa Claus. I was even allowed to sit on his lap, which is something now considered not correct.

The mist was not getting better, and now the darkness joined in. I felt sorry for all those Chinese children that were almost permanently surrounded by invisibility. At the moment there seems to be a big conference about the condition of the atmosphere in the world, they are having these conferences permanently. At least they are talking about it, although they do not seem to be doing very much about it.

I then decided to visit the book store where their Christmas cards were a little better than the others, although Switzerland is not a country for fantastic breathtaking Christmas cards.It was there that Mr. Swiss made contact on my mobile phone to say he had arrived in town and a few minutes later we were re-united in the book shop just like a scene in a Hollywood film. Afterwards we made our way through the mist to the car, where Mr. Swiss took my photo in town. 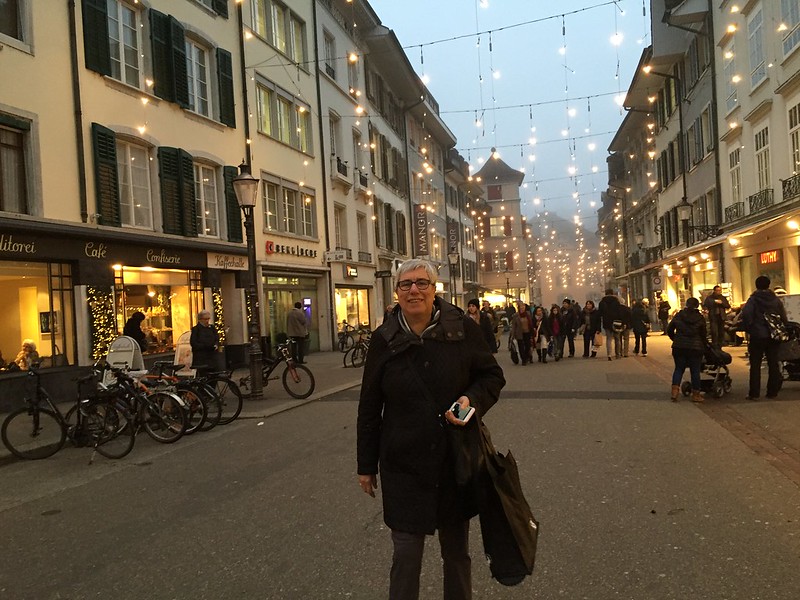 He found it was one of my better photos. It was taken in the main street in town where we have a few Christmas lights hanging around. The fog had thickened on the drive home Luckily neither Mr. Swiss nor I have pains arising from fog, although we were both tired. My legs were aching and he had a backache. So is the life of two golden oldies.
Posted by Pat Gerber-Relf at 20:16